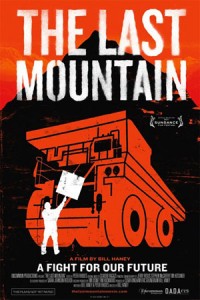 THE LAST MOUNTAIN, an environmental documentary that is opening in limited release, looks at the coal industry in West Virginia that has strong implications for the future of the evolving energy plans for the United States. Directed by Bill Haney, the film focuses on the grass-roots efforts of residents of the Coal River Valley in West Virginia to force the Massey Energy Company to cease their destructive mining efforts. Massey is a union-busting, environmental-law-flouting company that has been criticized for its use of the controversial mining strategy called mountaintop removal. The mining technique produces earsplitting explosions, raining boulders, toxic sludge and poisoned wells which are poisoning the drinking water of this poor corner of the Appalachian Mountains.

The advocacy documentary profiles the environmental horror story filled with imperiled schoolchildren, silica dust, and cancer and autism clusters that defy statistical logic. Coming down like a ton of bricks on those he believes to be responsible, Mr. Haney introduces scientific testimony, contentious debates and moving personal stories into a persuasive indictment of Massey in particular and fossil-derived energy in general. He is joined in his efforts by the energetic environmentalist Robert F. Kennedy Jr. and a slew of stalwart locals and fearless outsiders.

Massey’s rape of the land in the name of energy conservation has flattened millions of acres of forest and mountains. The film’s aerial views of the devastated landscape speaks volumes about what a wrong-headed strategy this and explodes the notion that black coal is a  “clean energy” resource that needs to be expanded to wean our dependency on foreign oil.

The film premiered at the 2011 Sundance Film Festival and is making its way through the international documentary festival circuit as well as receiving a limited theatrical release via Dada Films in the United States and Filmswelike in Canada. For more information and to view the film’s trailer, visit: http://thelastmountainmovie.com/