As America moves strongly and steadily from being a country dominated by its white population to being an increasingly multi-cultural place (particularly with the explosive population growth and increased political influence of the Latino community), stories about immigrants (both legal and illegal) have an undeniable power. When the focus is on a struggling father and the dreams he harbors for his children, the pull is especially strong. Such is the case with A BETTER LIFE, a new film by director Chris Weitz that is emerging as a small humanist gem amidst the summer action blockbusters. 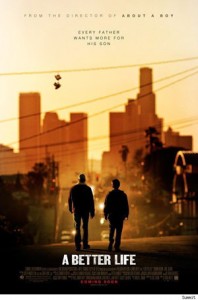 In telling this story of a self-sacrificing Latino gardener and the dreams and aspirations that he projects onto his only son, Weitz is clearly conjuring another celebrated father/son tale, the Italian neorealist classic THE BICYCLE THIEF (1948) by Vittorio de Sica. In that film, a poor laborer and his son search for a stolen bicycle that the father desperately needs in order to work in an impoverished postwar Italy. In A BETTER LIFE, the scene shifts to contemporary Los Angeles, where a Mexican gardener in East L.A. and his Americanized son take a similar journey.

In the film, their search for a truck becomes an odyssey of powerlessness and anxiety that creates greater understanding between father and son, who previously were almost completely unaware of each other’s lives. On a larger level, the film viscerally recreates the excruciating reality of what it means to be without documents in an increasingly hostile American society. Veteran Mexican actor Demian Bichir is already generating awards buzz for his sensitive portrayal of Carlos, an illegal immigrant whose wife long ago abandoned him to raise their young son Luis (an impressive debut by José Julián) by himself.

While the father works hard on the lawns and gardens of the privileged, his son flirts with the idea of joining a gang as a way of asserting some power in his essentially powerless borderline poverty existence. When Carlos has a chance to buy a truck with all its gardening equipment intact, the American dream looms large, only to be dashed when the truck and all its contents are stolen. With Luis as a reluctant companion, the desperate father searches for the thief, a journey that takes father and son into the heart of gang territory and into the hands of unscrupulous strangers with ulterior motives.

Aside from the strength of the acting, director Weitz brings a real sense of place into the proceedings, showing the Los Angeles landscape as both the land of promised dreams and a hell in which no one can be entirely trusted. However, the most memorable contribution is by lead actor Demian Bichir, who creates an indelible portrait of a proud man with limited means and a ferocious desire to pass on the opportunities denied him to his often ungrateful son. It is the kind of humanist performance that touches audiences and wins awards. The film, currently in limited release via distributor Summit Entertainment, had its world premiere last week at the Los Angeles Film Festival.