Review of AFTER EFFECTS ILLUSIONIST by Chad Perkins (Focal Press, 2009) 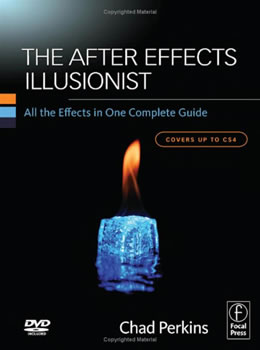 After Effects Illusionist has the feel of a friendly, helpful guide through the potentially confusing myriad of effects included in the software package.  Chad Perkins’ approach is professional and complete, but it is also very personal; he manages to walk a fine line between general discussion and detailed, step-by-step instruction.  It is written with the experienced After Effects user in mind.  However, an intimate understanding of the software is not required as there is still a wealth of knowledge for the neophyte. The intent of the text is not simple to cover the numerous effects included in the software. It is written from point of view of someone intimately familiar with the product who wishes to point out short cuts as well as pitfalls of its use.

The book is organized in the same manner as is After Effects, borrowing directly from the software menus.  This allows Perkins to address all the effects in a structured way, permitting a sensible approach to using the book along with the software.  The information in each section is presented as a sort of guided walkthrough of each effect.  The effects are described and then demonstrated, both verbally and through comprehensive visual aid that show in detail the effect and its use, both good and bad where applicable.  When an example is given, varying levels of the effect (or multiple effects) are shown directly with a description of values used (e.g. “fog opacity set to 25%” or “amount of blur set to 80”) and from where these values are derived.  This combination of clear language and numerous screen shots help make the information both accessible as a software companion and easy to understand as a text book.

The CD-ROM included as an appendix to the book has three additional chapters as well as several exercises to be used in conjunction with the text and the After Effects software.  Again, this is done in a style that ensures the reader can follow exactly along.

After Effects Illusionist is an accessible and detailed guide that is as easy to use as it is informative.