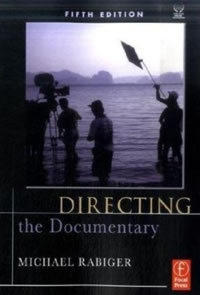 If you are seeking the conceptual  knowledge and the technical know-how of making documentary films then look no further than this Fifth Edition of “Directing the Documentary” by Michael Rabinger.  Rabinger, who now holds the prestigious title of Professor Emeritus, was once a BBC director of documentaries and head of production at one of America’s finest film schools: The Columbia College in Chicago. This new edition (c. 2009) of this most revered book contains a significant amount of new information and is divided into two. Book I is as thorough a look at fundamentals as you are likely to encounter. The author firmly believes that “filmmaking is something you must do…. before theoretical issues gain substance”.

Book I supplies what you need to become an active participant in the process and has five cogent and lucid parts: (I) You and Your Ideas; (II) Documentaries and Film Language; (III) Preproduction; (IV) Production; (V) Postproduction.  New to this transformative edition are “Remember Boxes” containing important ideas or definitions.  Another useful feature is that there is signposting at salient points in Book I directing you to Book II’s more advanced knowledge, and, vice versa, in Book II sending you back to Book I for forgotten fundamentals.

Book II is for those ready for professional level concepts and practices and is divided into three   parts: (VI) Documentary Aesthetics; (VII) A. Advanced Preproduction B. Advanced Production C. Advanced Postproduction; (VIII) Education and Starting Your Career.  The book also contains a useful appendix which contains 32 useful discovery projects from which you can learn how to deal with issues involving   development, budgeting, shooting and postproduction.

If you are new to filmmaking or have somehow not read this book “you are hereby remanded to pick yourself up a copy.  It’s as close to being a “bible” of documentary filmmaking as you are likely to ever encounter.