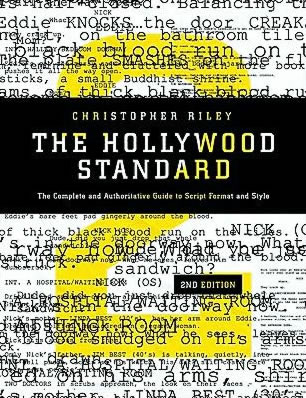 If you are a screenwriter, from neophyte to expert, who has ever had a question about how to format a screenplay or television script then this is the book you need by your laptop!   The author, Christopher Riley, is a professional screenwriter who worked from 1983 to1998 in the standard setting Warner Bros. script processing department where he learned from veteran script proofreaders with decades of Hollywood experience.  He eventually was promoted to manage the studio’s script operation supplying scripts to countless projects in development and in production.  He was the man at the studio to go to for any and all script formatting issues.

As screenwriter Antwone Fischer (Training Day 2) writes in the introduction to this indispensable book: “A screenplay is like a map to a story.  If you don’t do it right, it won’t tell the story you intended………If you give a script to a studio that isn’t written using standard Hollywood format, it may be a good idea, with good dialogue and action, but it does not come across the way you intended”.

Aspiring writers take heed:  in as competitive a field as screenwriting you can not afford to be tripped up by improper formatting.  The story department is the first gatekeeper in the advancement of a script to “green lighting”. As Brian Davidson, a writer-producer with CSI: Miami observes: “When I need to figure out how to script a flash forward for a character from the future with a split personality, The Hollywood Standard is where I turn.”  Even if you have one of the popular script writing software packages such as Final Draft, or Movie Magic, you still need to have this book as it solves questions that apply to your specific scripting problem. Standard formatting is about infinitely more than margins!

And if for some reason you have neglected to pick up a copy of this book, it now is in a cooler and more useful second edition.  The book is printed in the 8.5-x11-inch format so sample pages have the exact same dimensions of a script page and Mr., Riley has added a series of new chapters to help you get off to a proper start.  The book begins with a “Quick Start Guide” and has a chapter you must read called “Avoiding a Dozen Deadly Formatting Mistakes”.  In addition, the new version has FAQs at the end of many of the chapters.

If you take your craft seriously then this is the practical and definitive sourcebook to insure that your work will be read with respect.