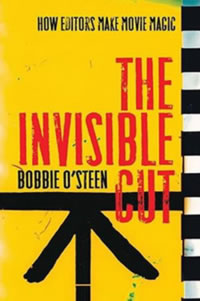 Editing is the only craft unique to filmmaking and Bobbie O’Steen’s book is a unique way to learn how editors make movie magic. By analyzing scenes and frame grabs from nine classic films, O’Steen helps the beginning editor create an overall strategy for cutting a motion picture in service to its story. And, since each kind of scene requires a different approach, she has selected thirteen scenes to illustrate why and how the editor made his choices. Beginning with the dialogue-driven classic: Twelve Angry Men and ending with an analysis of the montage in Butch Cassidy and The Sundance Kid and The Big Chill. Along the way you will learn how to cut comedy (The Graduate), suspense (Rear Window), mystery (Chinatown), action (The French Connection, Butch Cassidy and The Sundance Kid), the sex scene (Body Heat), and the musical (A Hard Day’s Night). The Invisible Cut is an essential book for anyone wishing to learn the art and craft of motion-picture editing. I highly recommend it.

Rob Goald teaches in the Film Dept at UNLV, and is retained as an acquisitions associate for Cinema Vault.