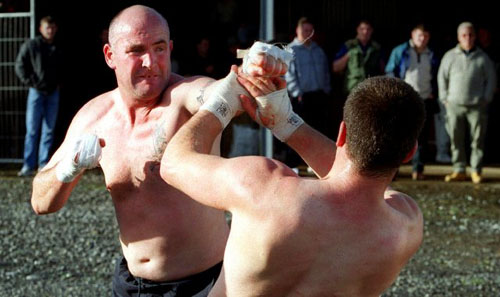 The gloves are definitely off in the bruising documentary KNUCKLE by debut Irish director Ian Palmer. The film, which opened in New York, Los Angeles and Austin this past week via distributor Arc Entertainment does not, pardon the pun, pull any punches. It offers an insider look of Irish travelers whose bare-knuckle fistfights are part of their macho tradition. For generations, the Irish traveller community has been fiercely proud of their heritage, prepared to fight to defend the honor of their clans. In the film, two rival families, the Quinn-McDonaghs and the Joyces are two of these clans, whose animosity dates back to a punch-up that had devastating consequences, years ago, in London.

Director Ian Palmer spent a decade winning the trust of these families, who are notoriously publicity shy and distrustful of strangers. He focuses on two brothers of the Quinn-McDonagh tribe as they grow-up and take part in organized bare-knuckle fights in remote country lanes, refereed by members of neutral clans. Some do it for the money, but most do it for the pride and honor that comes of being the King of the Gypsies. Best to beware….these are not the choreographed boxing that we’re used to seeing on the big screen. It is infinitely more violent and bloody, with the chilling reality that noses are really getting broken and real blood is spurting out of their wounds.

In this sense, KNUCKLE is brutal, painful, visceral stuff (not exactly your regular Christmas Holiday fare). However, it also communicates a strong sense of family, the tests of loyalty and elusive quest for honor that is keeping with the Holiday spirit. This is a voyeuristic documentary, which gives us audience members a rare look at a secret world that has its own moral levels and linguistic code (the film features subtitles to help us decipher their strong Irish gypsy accents). In a way that is not meant to disparage its subjects, the film is almost like a wildlife documentary, where pure animalistic urges are played out without a sense of outrage. Some fighters are honorable and just want to get out of the game – others are determined to keep fighting until their rivals concede. To them, this is their life, but to us it seems futile – however beat up they get, however much blood is shed, as soon as they’re fit and ready to go again, they’ll be at it with gusto. This make for an unexpected emotionally gripping experience. For more information and to view a trailer, visit: http://www.knucklethemovie.com/