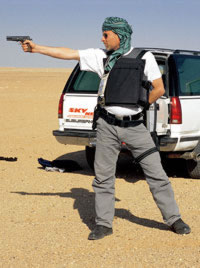 Fidelis Cloer is a self-confessed war profiteer. In a career spanning two decades of global turmoil, he has supplied kings, presidents and the odd dictator or two with the finest luxury armored vehicles, hand-crafted in Germany, that money can buy. In his world, where security is a commodity, violence (and better yet, war) present sales opportunities much like rain sells umbrellas.

Always with an eye on growth opportunities, Fidelis found the perfect war when the US invaded Iraq: it wasn’t about selling a dozen cars, it was about the possibility of selling thousands. But as the war evolved and armor-defeating Improvised Explosive Devices (IEDs) proliferated, “survivability” became his sales pitch and Fidelis quickly found himself engaged in a pathological arms race with insurgents who upped their explosive ante to defeat his increasingly higher (and more expensive) levels of armor. In war, as in life, there is such a thing as too much of a good thing.

“Petra and I are pleased that BULLETPROOF SALESMAN has finally found a home,” says co-Director Michael Tucker. “We’re excited about working closely with First Run to bring our film to audiences in North America.”

Michael Tucker, born in 1966 in Honolulu, Hawaii, and Petra Epperlein, born in Karl Marx Stadt, GDR (East Germany) in the same year, are one of the preeminent husband-wife documentary filmmaking teams. In 2003, the outbreak of the war in Iraq pulled Tucker to Baghdad, where he followed an armored car salesman making sales calls for BULLETPROOF SALESMAN. While filming BULLETPROOF SALESMAN, Tucker took interest in the story of US soldiers deployed in Baghdad and began to work on GUNNER PALACE. After the critically acclaimed release of GUNNER PALACE in the spring of 2005, Tucker and Epperlein began work on THE PRISONER: OR HOW I PLANNED TO KILL TONY BLAIR, which was released in 2007. Their latest work, HOW TO FOLD A FLAG, is premiering this week at the Toronto International Film Festival.

In the field, Epperlein does sound; Tucker does camera. In the studio, they share editing tasks. They live and work between Berlin and New York, where Epperlein is currently working on a graphic novel about her childhood in Karl Marx City and Tucker is working on his first narrative screenplay.

Marc Mauceri, VP of First Run Features, says, “I love this film; it is so different – and more enjoyable – than the usual, serious, heavy-handed style that many documentarians bring to weighty subjects. BULLETPROOF SALESMAN is a great example of how a well-crafted film can sneakily convey information and wisdom in a such a way that it will appeal to 19 year-olds as well as 90 year-olds; and the message behind it – about the ironies and absurdities surrounding modern-day war and capitalist greed – is both fresh and eye-opening. We’re proud to be working with such talented, out-of-the-box filmmakers.”

First Run Features recently celebrated its 30th anniversary with a retrospective at the Film Society of Lincoln Center. BULLETPROOF SALESMAN was repped by Josh Braun at Submarine, and produced by Pepper & Bones Films.