In 1994, Quentin Taratino wrote a fictional story about Mickey & Mallory Knox, a honeymoon couple who, as a perverse aphrodisiac, randomly shot and killed over 50 people. Oliver Stone directed the film and the week it opened, a real young couple in the Midwest went on a rampage killing 4-5 strangers. When apprehended by the police and asked their names, they replied that their names were Mickey & Mallory Knox – the fictional character’s names from Stone’s film. The film was Natural Born Killers, and this film made a difference.

I wrote for a popular television series called Touched by an Angel. Among the fan mail one day, we heard from one viewer. This man had decided to kill himself. It was a Sunday night and he happened to have the television on CBS where he watched an episode of Touched by an Angel. Moved by the story, he wept then decided to give life another chance. He wrote to us and thanked us for making a difference in his life.

After earning a living from acting in NY, I grew disenchanted with the roles of women in new plays, so decided to write my own, ten were produced. In 1989, I was wooed by Hollywood after writing an award-winning play, optioned by MGM. I began also to be offered writing assignments- both features and television movies. You might say I was the flavor of the month writer in Hollywood. Driving on the Hollywood freeway, I heard a Bill Moyer’s interview with David Putnam on NPR radio. David Putnam was for a year head of Columbia Pictures, and producer of Chariots of Fire and the Mission. Putnam said something which stayed with me. He said, “If movies could be what they might be, there’d be no need to go to church.”

As you know, many seem to want more from today’s films and television. If this is so, then why are we getting the films we are? Because, as a rule, the creative people rarely have the power in Hollywood. It’s a little easier in television as writers more often move on to producing. For instance, I was assoc. producer for The Christmas Wife, a movie I wrote for HBO, turning down a more lucrative contract with the networks, I opted for less money and more creative control. I cast the film myself with Jason Robards and Julie Harris earning a co-producer credit. We received 4 Emmy nominations including best film and best writing. A comic aside: a major network wanted to produce The Christmas Wife, “We love it, but what if ….”

Though I have been fortunate and sold nine scripts, for those of us committed to socially-responsible media, sometimes we lose. Here are two of my own examples:

1. The Freedom to Kill: the Randy Weaver Story. Naples, Idaho. 1992. I held the rights for two years, and was offered a deal on network television by a company who produced 4 movies a year. One catch: they all had to show Federal Officers as the heroes. I was committed to do a balanced story, not black and white. Two American families: the Weavers in Idaho and the Degans in Massachusetts. Both share a strong belief in family values, religion, and America. Both were Green Berets in Viet Nam, trained to kill, and willing to die for their country. One was a white supremacist, the other a Federal Marshall. Both were convinced they are right. Both died senselessly in Idaho, fighting each other.

2. It’s Only Women: the Dalkon Shield Scandal. Sometimes a studio or network will have a subject but not the story. I was hired by NBC to develop a story about the Dalkon Shield, which I later learned was a birth control device found defective then covered up by the corporation which also makes Chapstik. I interviewed 20 women and then made a composite of two women who suffered from the Shield. I was new in Hollywood and quite naïve. Instead of just writing the Shield story, I wrote a hard-hitting story about corporate greed in America. NBC expected it to win the Emmy and was excited, that is, until no sponsor would touch it. Who are the sponsors for television? Corporations. The script was never made though I was paid for it, thanks to the WGA. By the way, here’s a postscript to the Dalkon Shield Story. After the victims won a lengthy class action suit, the company was forced to take the shield off the market in America. They hired the doctor who invented the birth control device and hand him travel to other countries to encourage its use. Later the corporation simply dumped it in the Third World.

My son tells me that the # 1 video game right now is Grand Theft Auto which shows the way to success is murdering others. Now, I am not saying that everyone who views such will become murderers. It is said “we are what we eat.” And, if as C.G. Jung said, “The world hangs on a slender thread, that is, the psyche of man” then we might consider feeding our psyches well. I’d like to think that my President gazed in silent wonder at Monet’s Waterlillies, listened in rapture to Bach’s Concertos, and read with delight the Sonnets of William Shakespeare.

However, “times they are a changing.” There’s been a shift, and though it’s only the beginning, there is a new pulse in Hollywood, an opening for consciousness raising films. Last week I was guest speaker for ISLEE, a group of filmmakers in LA committed to such films. There are new production companies such as the Agape Church has created which produce only such films. Send completed scripts only.

Parallel with writing films and television, I was invited to teach graduate screenwriting at USC Graduate Film School in LA, #1 film school in America. As a teacher and writing consultant, I believe it is important to support your vision, not mine. However, more and more, the students would be writing derivative spin-offs of the latest blockbuster thrillers. If you’re not going to write original stories in your twenties and thirties, then when? So after seven years, I quit teaching graduate school and later launched The Way of Story: the craft & soul of writing workshops first at the Esalen Institute in Big Sur then elsewhere in the states, Europe and Asia. The idea is to teach an integrative approach to writing, where you brought all of yourself to the table – not just the left brain. After a few years, I wrote The Way of Story book – which ironically is now required for several schools such as NYU writing programs. I guess the moral is ‘follow your own star’.

“The events of world history are, at bottom, insignificant. In the last analysis, what matters is the life of the individual.” – Dr. C. G. Jung 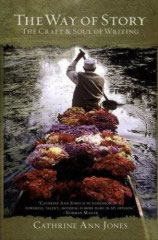 The Way of Story: the craft & soul of writing is for all forms of narrative writing with a special focus on dramatic writing. Craft alone is vital but not enough.

It is the integration of solid storytelling technique with experiential inner discovery that delivers a great story. The book is also a memoir where I make use of my personal and professional journey to illustrate story.

“Think wrongly, if you please, but in all cases, think for yourself.” – Doris Lessing, Nobel-winning novelist

Words like these encourage us to reach deep into the creative psyche and offer something of true value to our world. If we could infuse filmmaking with even a portion of the vision and value that lives among us, that lives in this room right now, then movies would indeed rise to what they could be.

Story has been the foundation of rituals that empower both individual and collective values since society began. Story provides both identity and standards to live by and is thus essential to our well being. It serves as a mirror reflecting who we are and what we believe in. What story would you choose to live by? The answer offers a clue to your soul, your deepest self. I’m sure you’ll agree that it is soul which gives meaning to both life and art. If not now then when?

“Become the change you want to happen.” – Gandhi

Catherine Ann Jones is an award-winning writer whose films include The Christmas Wife (Jason Robards), Unlikely Angel (Dolly Parton), Angel Passing (Hume Cronyn, Calista Flockhart) which screened at Sundance and went on to win fifteen awards, and the TV series, Touched by an Angel. Her latest feature, Convergence, is due out end of 2009. Ten of her plays, including Calamity Jane and On the Edge, have been produced both in and outside of New York City. Winner of the National Endowment for the Arts Award among others, Ms. Jones, a Fulbright Scholar to India, has served on the writing faculties of The New School University (NYC), University of Southern California (L.A.), Pacifica Graduate Institute, and the Esalen Institute. Ms. Jones lives in Ojai, teaches internationally, works as a script & book consultant. Her book, The Way of Story, is required for NYU writing programs, www.wayofstory.com