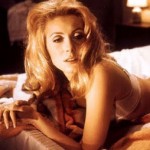 The name itself evokes the legend. Catherine Deneuve is, by all definitions, a French film goddess. For over 50 years, she has reigned supreme as an iconic beauty, a cinema legend and a model of a particular French style of aging gracefully. Over the years, when I have seen her in person at film festivals or following screenings, she has worked hard to de-emphasize the goddess aspect of her fame, but her allure and perfect symmetry are as striking in person as they are on the screen. So, lucky Montrealers will have a chance to sample both when the goddess descends from the cinema heavens this week at the Montreal World Film Festival, where the actress is being honored with a Lifetime Achievement Award and a showcase of some her cinema classics.

Deneuve was born Catherine Fabienne Dorléac in occupied Paris in 1943, the third of four daughters, to French stage and screen actor Maurice Dorléac and actress Renée Deneuve. One of her sisters, famed 1960s screen actress Françoise Dorléac, had her career cut short when she died in a car crash in 1967. Possessed of a beautiful face and figure since childhood, she was a natural for the movies. She made her film debut at age eleven in LES COLLEGIENES (1957) under her given name, but subsequently adopted her mother’s maiden name of Deneuve so that she would not be confused with her elder sister, Françoise Dorléac, who was using their father’s name. Thus Catherine Deneuve was born. She rose to fame rather immediately with such films as VICE AND VIRTUE (1962), directed by notorious ladies man Roger Vadim and especially with her starring role in the through-song jazz musical THE UMBRELLAS OF CHERBOURG in 1963, directed by Jacques Demy. She made two more films with Demy, most notably another musical, LES DESMOISELLES DE ROCHEFORT (1967), with her sister Francoise Dorléac playing her twin sister. Her next roles in Roman Polanski’s REPULSION (1965) and Luis Buñuel’s BELLE DE JOUR (1967) solidified her international stature and screen persona as what one film critic dubbed “a cold, remote erotic object which dreams are made on”. She worked again with Buñuel in TRISTANA (1970) after a somewhat failed attempt at breaking into Hollywood with the underrated THE APRIL FOOLS in 1969. 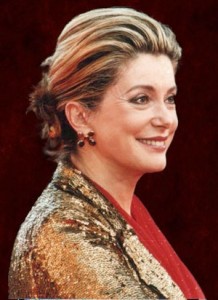 The 1970s were a somewhat fallow period for her on the screen, as her youthful beauty blossomed into provocative middle age, she remained in the public eye as a fashion and perfume spokesperson, being the face of Chanel Number 5. However, as she matured on screen, the depth of her acting also deepened, as evidenced by her steller work in THE LAST METRO (1980), a Paris Occupation drama directed by François Truffaut, for which she won the coveted César Award for Best Actress. Her performance as a bisexual vampire in the Tony Scott cult classic THE HUNGER (1983), opposite Susan Sarandon and David Bowie, now looks incredibly prescient, considering the worldwide fascination with vampirism and sex. 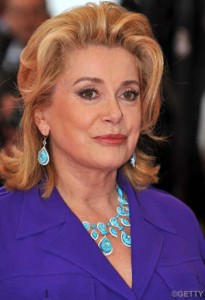 Deneuve won a second Cesar Award and received an Academy Award nomination as Best Actress for her performance in the exotic INDOCHINE (1992), which also won the Academy Award that year as Best Foreign Film. Deneuve is one of the distinct few to receive an Oscar nomination for a non-English speaking role. Her other significant films of the 1990s include André Téchiné’s MA SAISON PREFEREE (1993), LES VOLEURS (1995) and PLACE VENDOME (1998). The following year, she appeared in five films, demonstrating that her popularity and allure only deepened with age. In 2000, she took on a rather unglamorous part in the Lars von Trier’s musical drama DANCER IN THE DARK, alongside Icelandic singer Björk. The film, which divided audiences and critics, still was selected as Best Film, winning the prestigious Palme d’Or at the Cannes Film Festival that year. Her next project also took advantage of her musical chops (she has had a spotty but consistent singing career, having released several albums). In 8 WOMEN, directed by French wunderkind Francoise Ozon, she shared the screen with other French screen legends, all winning the Silver Bear Award for Best Ensemble Cast at the Berlin International Film Festival.

In 2005, Deneuve published her memoirs under the title of Close Up and Personal: The Private Diaries of Catherine Deneuve, in it she writes about her experiences shooting the films INDOCHINE and DANCER IN THE DARK, and working with such diverse leading men as Burt Reynolds, Jack Lemmon, Vincent Perez, William Hurt, John Malkovich, Alain Delon, Gerard Depardieu, and one of her paramours, Marcello Mastroianni. In 2006, she headed the jury at the Venice Film Festival. She made another brief return to Hollywood with a guest-starring role on the FX TV series NIP/TUCK during its fourth season in November 2006. In 2007, she lent her voice to the Oscar-nominated animated feature PERSEPOLIS.  In 2008, she appeared in her 100th film, UN CONTE DE NOEL, and was also honored at the 2008 Cannes Film Festival for her contributions to European cinema.

This past year, Deneuve starred in the period feminist comedy POTICHE, her second film with Francoise Ozon. Her newest film, the musical LES BIEN-AIMES, which co-stars her real-life daughter Chiara Mastroianni (from her affair with the Italian heartthrob Marcello Mastroianni), will be released later this year. During a recent interview, she revealed that from the 100 films in which she has appeared, THE UMBRELLAS OF CHERBOURG is her personal favorite. “To do a film completely with music like an opera was an incredible experience. But to work with music all the time, it’s such a lift, you know? It’s an opera, it’s very different.” She stated. It is certainly one of her most loved performances, and that love will spill over this week in Montreal when she is honored as a great beauty, a great actress, a social activist, a philanthropist and, oh yes, a film goddess. For more information on the Montreal World Film Festival, visit: www.ffm-montreal.org