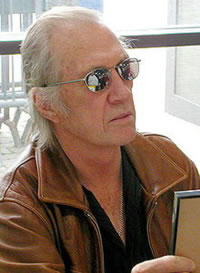 To quote the great film critic of New York Magazine, David Edelstein, seems like the appropriate thing to do as we celebrate the life of the late David Carradine “When we talk about an actor being hip, it’s often subjective: He or she embodies what we’re not but on some level long to be.

To me, David Carradine was the apogee of hipness: not my favorite actor, not even in the top 50, but my existential hero, and a man who looked like he got laid a lot — a sort of B-movie Jack Nicholson. His vaguely Asian physiognomy made him suited to kung-fu and Zen masters, and his acting had that same alert detachment. You rarely got the sense that his roles cost him emotionally: Unlike his brother, Keith, who has been known to take risks, David had an inviolable sphere of privacy. But he never condescended to his material, even when it was risible, and his amusement was contagious.” David passed on in the most risky of erotic pursuits-through autoerotic asphyxiation. He left many in the news media pondering if “scarfing” (tying a rope to your neck and genitals) was worth the ultimate sacrifice. We at FFT salute you brother for leaving your earthly existence behind in pursuit of the ultimate orgasm!