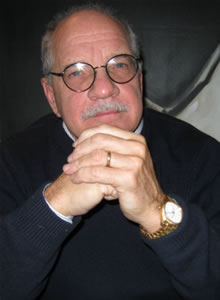 For veteran director/screenwriter Paul Schrader, seeing his film Adam Resurrected appear in this year’s Israel Film Festival in New York is a little like coming around full circle. Originally released here almost a year ago, his strange surreal little black comedy of a film stars Jeff Goldblum as a concentration camp survivor recovering his sanity in an Israeli psychiatric hospital in 1961. Goldblum’s character Adam has tried coping with surviving.

Though the film received mixed reviews and limited exposure, Schrader held special presentation of it at the 2009 Israel Film Festival in New York — which took place this winter — and was honored with the IFF’s Achievement in Cinema Award during the opening night Awards Gala being held at the SVA Theatre — where the rest of the Fest is held as well.

While the 63-year-old Schrader began his career as a critic, he quickly segued into writing then directing. His list of credits include Taxi Driver, Blue Collar, Raging Bull, Cat People, Mishima: A Life In Four Chapters, The Mosquito Coast, City Hall, American Gigolo, Patty Hearst, Auto Focus, Affliction and The Walker among the more than 30 titles he has either written or directed.

In its 24th year, founder Meir Fenigstein‘s Israel Film Fest has brought to this country a fascinating survey of an ever-evolving cinema andnd has succeeded in touring these films in several cities include NYC. Running from December 5th to 13th, 2009, the festival showcased 28 features, docs and shorts. For further info on future IFF programs go to israelfilmfestival.com.

Q: This film reminds me of Philippe De Broca’s King of Hearts.

PS: King of Hearts is a sweet film. [Adam Resurrected] breaks the two rules of Holocaust cinema, which is why it’s controversial for many people.

If you think about it virtually every film you’ve seen on the holocaust is: 1) based on fact — [that] these things actually happened, and 2) it’s reverential — all those poor people, they suffered so much.

This is not based on fact. There never was a hospital like that, or a commoner/prisoner relationship like that, and it’s not reverential. [The book] came out in 1968 in Israel, right at the same time as Catch-22,Slaughterhouse Five, and all of those books written by guys who were in a war looking back after 20 years with a very jaundiced cynical eye at those experiences. That’s the literary tradition that this book comes out of. So it is not really out of the holocaust tradition as much as it is out of that kind of literary tradition.

Q: Do you think that Israelis perceive this film differently than the general Jewish population or Americans?

PS: We premiered it at the Haifa Film Festival, and I was really expecting a possible negative reaction. But the response was very good. The book was viciously attacked when it came out, and it wasn’t until it was championed in the West that the Israelis started to realize how good it was.

Q: Why is this film’s story important to tell now?

I’m not Jewish and certainly didn’t think the world needed another holocaust film from me, so I didn’t see myself as the logical candidate to be doing this. But then I started reading it, and as soon as that thing with the dog came, I went, “Wow this is cool.”

Q: What is it about you that can do this? You get it…

Anything that doesn’t bore me I think is doable because it’s keeping me awake. This particular story had been passed on by several of the usual suspects in Hollywood because they didn’t think it was doable. That never occurred to me because I had never seen this before so of course it was doable because it was fascinating, it was interesting.

Once you have a situation that is fresh, then you sort of believe in it and it becomes normal. So you do end up with protagonists that haven’t been in other movies before. There’s not been a guy like Adam [Stein]; he’s rather new to movies. What interested me is that I haven’t seen a movie about this guy before.

PS: Of course, I’m a writer. The script was good but it was long — it was by a first-time writer [Noah Stollman] — so I had to take some length out of it, about 20 pages, and in doing so, you take ownership. It’s Noah’s script, but I have ownership too. That’s just in pre-production, but once you get to production every script is rewritten in rehearsals. And then, to some degree, it’s rewritten on set too… not nearly as much as some people think, but to some degree.

PS: Yes, miraculously. I’ve seen him quite a bit. He died a few years ago and then he wrote a book about being dead. And he’ll describe himself as, ‘Hi I’m Yoram Kaniuk who once was dead but now am alive.’ That’s the way he talks. He was in a coma for six weeks. And he came back to life.

When I first met him I didn’t think he’d live to see the film, but he has improved. He’s quite an extraordinary guy. He loves this film. He has been a huge champion of this, which is very flattering since the film is something else but does not have the reach and the complexity and the brilliance that the book does.

Q: You got handed a project that was once thought of for Orson Welles. Did you ever think in your head, how would Orson Welles approach this film?

PS: I don’t know at what point in his career. I have a feeling it was in the back end of his career. But I know he wanted to do it with Bette Davis. And to see him and Bette going around barking like dogs, I think I would’ve paid for that [laughs]!

Q: Why did you think Jeff Goldblum would make a good dog?

PS: On the very first read [of the script] I was sitting in my living room on page 70, and my wife walks through so I said, “You know, I’m reading the script now and there is an actor who was born to play this role.” She said, “Who is that?” And I said, “Jeff Goldblum was born to play the role I am now reading.”

I didn’t know Jeff. I said, “He has lived his entire career to play this role.” That’s how strong it hit me. So when I first met with the producer, I said, “You know there is an actor who was born to play this role.” Of course he wasn’t too excited when I said Jeff’s name because that makes his job harder. We went to some other actor and as far as I was concerned I was happy they passed on it. Finally we ended up with Jeff.

Q: Is it because he has that sort of smarmy attitude?

PS: He’s an entertainer, he’s a showman. Plus he’s tall, Jewish — he’s like a big Jewish prince — and the right age. It’s interesting to play him at his real age [56] because he always plays someone youthful-looking. So it was interesting to actually show the lines and crevices in his face.

Q: How does Jeff feel about it? He’s not mad at you for showing that?

PS: No, no. Jeff is the perfect soldier.

Q: It was a no-brainer to have Willem Dafoe as the Nazi.

PS: That was a favor. Nobody likes to play Nazis. They wanted a name, so I just had to pick up the phone and say, “Willem, I’m going to ask you a favor.” The German financer did not want a German to play that role. So we needed an American name, and that meant calling up a favor. So that meant Will.

Q: That was a bizarre plot twist with the nurse. I wanted to see more of that.

PS: She’s fabulous. Ayelet [Zurer] is like the biggest star in Israel, but she’s really famous for being vulnerable. She was the wife in Munich. So this is not really what she’s good at, she’s good at being soft. This was kind of a change for her. But I really felt that we had to hold onto that. Even though it doesn’t make a whole lot of sense at times, but then not everything has to make sense. It makes some kind of sense.

Q: It hits all your marks. It’s got a little bit of that brutal side and perverse eroticism. You must’ve had fun with shooting some of those scenes where she’s with the dog. But it must’ve been tough to get it right.

PS: It was not fun for her [Zurer], she did not like that. So that was a little bit of a problem because she was doing it knowing it was the right thing to do, but she wasn’t doing it because… she had to really be talked into doing this film.

Q: Would you agree that Adam Resurrected is also about survival?

PS: Yeah, although in some ways, if it was up to him [Adam] he would be dying. I’m just an old dying clown, let me die. Dr. Nathan Gross [Derek Jacobi] is the one who brings that boy… why is that boy in the hospital? He’s not there because he’s a camp survivor. He’s there because he’s Gross’ special project. Then Gross finally gets interested in survival.

Adam resists survival. He doesn’t know what to think about that boy. It’s fascinating because he loves that boy but he hates that boy, he’s jealous. And when the boy finally climbs to defense and can speak, his reaction is “beat him up!”

Q: How do you explain the relationship between him and the nurse?

PS: She was somehow attracted to this sick dying clown, and when he became healthy he was not of interest to her anymore.

Q: Was that part of what she thought was her therapy?

Q: There’s something special about this being set in Israel.

PS: When I first got this script it was set in Palm Springs. The book is in Israel. The producer moved it to Palm Springs because he was under the impression that no American director would come to Israel and shoot it. And I said, “Why is this thing in Palm Springs?” So we moved it back.

Q: The pervasive qualities of Israel are an important part.

PS: I’ll just tell you one last quick story. Yoram is writing this and he’s out in the desert, and he comes across a sign. On it says: “on this spot will be built the town of Arad.” So he said, that’s pretty cool, I think I’ll take my imaginary mental hospital — because no hospital like this ever existed — and I will put it in this imaginary town of Arad.

Q: What do you think people should take away from this film?

PS: I don’t know. The complexity of survival I guess. It’s not always the contradictions of things that are interesting; he loves the dog and he hates the dog, I’m sane, but it’s boring, I’m crazy but I’m dying.

When people had different ideas about what the ending of Taxi Driver meant, somebody asked me, wasn’t I upset? And I said no, that’s perfectly acceptable. I would be more upset if everybody had the same opinion of what it meant.