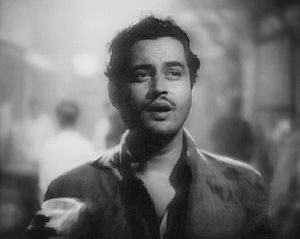 With the continued  appeal of Bollywood and last year’s Oscar win by SLUMDOG MILLIONAIRE, the history of Indian cinema is en vogue. This year as part of its Masterworks section, the New York Film Festival is offering the first compete New York retrospective of the works of Indian film artist Guru Dutt.

Born in 1925, Dutt was an Indian film director, producer and actor, who is often credited with ushering in the golden era of Hindi cinema. He made quintessential 1950s and 1960s classics such as Pyaasa (Thirsty), Kaagaz Ke Phool (Paper Flowers), Sahib Bibi Aur Ghulam (The King, the Queen and the Jack) and Chaudhvin Ka Chand (The Fourteenth Day Moon). In particular, Pyaasa and Kaagaz Ke Phool are now included among the greatest films of all time in annual polls conducted by  Time Magazine and the UK film journal Sight And Sound. He is often referred to as “India’s Orson Welles”.

He is most famous for making lyrical and artistic films within the context of popular Hindi cinema of the 1950s, and expanding its commercial conventions. After studying at the Uday Shankar Indian Culture Center, Dutt found a job in 1944 with the Prabhat Film Company, initially as an actor. He graduated to assistant director and choreographer for several prominent films of the time. He eventually was given the opportunity to direct and his first film Navketan’s Baazi, which was released in 1951, was a tribute to Hollywood film noir, with the morally ambiguous hero, the transgressing siren, and shadow lighting. The fledgling director became known for two early key technical developments that distinguished his work: the use of close-up shots with a 100 mm lens that became known in Indian movie-making circles as the “Guru Dutt shot”, and the use of songs to further the narrative in the movie.

His first films were decided successes. In 1954, he completed Aar Paar, a big box office hit, that was immediately followed by such successes as Mr. and Mrs. 55, C.I.D., Sailaab, and in 1957, Pyaasa – the story of a poet, rejected by an uncaring world, who achieves success only after his apparent death. Guru Dutt played the lead role in three of these five films. For the next seven years, until his untimely death at the age of 40, he made a remarkable string of influential films that went beyond the tried-and-true conventions of Bollywood cinema. In 1964, he acted in his last film Sanjh Aur Savera, opposite local superstar Meena Kumari.

On October 10, 1964, Guru Dutt was found dead in his bed in his rented apartment at in Mumbai. He is said to have been mixing alcohol and sleeping pills. His death may have been suicide, or just an accidental overdose. Pundits proclaim it an accident, since at the time of his death he was in development on his next film and was in discussions with various producers and actors on future projects. His premature death has only enhanced his legacy as a modernist and innovator, making him one of the leading figures in Hindi cinema. By exposing audiences to the work of this somewhat unknown giant of world cinema, the New York Film Festival is fulfilling its mandate of education and film literacy, as well as providing a showcase of films of excellent quality and lasting power.