To the untrained ear, Wroclaw, Poland, the site of the ERA NEW HORIZONS International Film Festival which begins next week, is generally mispronounced as “ro-claw”. I’ve been learning to offer the correct pronunciation, which is more like “rotz-vav”. The former German city known as Breslau has been on-again and off-again part of the Polish empire for centuries. It is now a major economic and cultural center for the modern state of Poland and will be honored in 2016 as the cultural capital of Europe 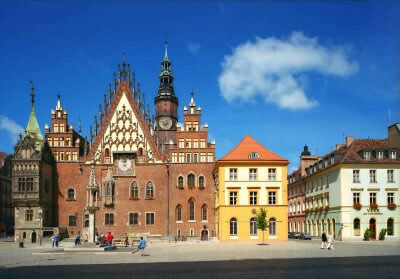 Wroclaw is the chief city of the historical region of Lower Silesia in south-western Poland, situated on the Oder River. Over the centuries the city has been part of Poland, Bohemia, Austria, Prussia, and Germany. In 1945, the city became part of Poland following the Potsdam Agreement. With a population of nearly 750,000, it is the fourth largest city in Poland.

The city is traditionally believed to be named after Duke Vratislaus I of Bohemia. It became a commercial center in the Middle Ages but was devastated in 1241 during the Mongol invasion of Europe. Afterwards the town was resettled by Germans who became the dominant ethnic group, though, as a important trading city, the city remained multi-ethnic. In 1262, the German-named Breslau joined the Hanseatic League. The Protestant Reformation reached Breslau in 1518 and the city became Protestant. However from 1526, Silesia was ruled by the Catholic House of Habsburg. In the following Thirty Years’ War, the city was occupied by Saxon and Swedish troops and lost 18,000 of 40,000 citizens to plague.

The Austrian emperor brought in the Counter-Reformation by encouraging Catholic orders to settle in Breslau, starting in 1610 with the Minorites, followed by Jesuits, Capucins, Franciscans, and finally Ursulines. These orders erected buildings which shaped Breslau’s appearance and helped make the historic town center a protected Unesco World Heritage site. Becoming part of Prussia in the 19th century and unifying as the German state in 1868, the city prospered until World War II, when it was extensively bombed by the advancing Russian armies. 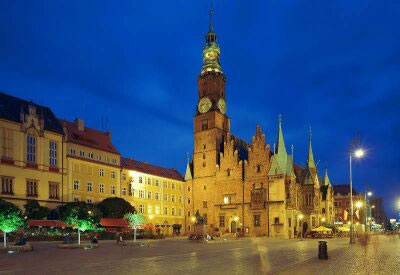 After the defeat of the Third Reich, Breslau became part of Poland under the terms of the Potsdam Conference. Most remaining German inhabitants fled or were expelled from Wrocław between 1945 and 1949. Although the city remained very Germanic in culture, Poles soon became the dominant force in local politics and economics. Today, Wrocław is a unique European city of mixed heritage, with architecture influenced by Bohemian, Austrian, and Prussian traditions. The city survived a devastating flood of the Oder River in 1997, when about one third of the town stood under water.

With a large student population, an active fine arts and performing arts scene and a bohemian artistic vibe, Wroclaw has become one of Eastern Europe’s most progressive cities. Among its famous native sons and daughters are:

For more information on the sights, sounds and attractions of Wroclaw, visit: http://www.wroclaw.pl/ms/english/