The horrors of war and the toll that it takes on both civilians and the soldiers themselves are film topics that, unfortunately, never go out of style. While it can be argued that audiences tend to stay away from such strong fare, a film that brings the audience to the center of the action and that involves it emotionally has a better chance to transcend the grimness of the material and make an impact with what is often a reluctant public. 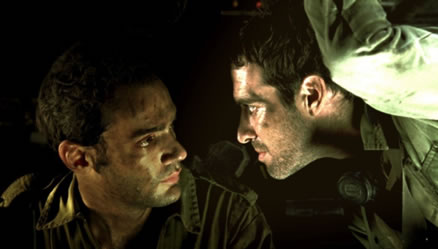 LEBANON, the new Israeli film by Samuel Maoz, is such an experience. Delving into the same source material as last year’s arthouse animation hit WALTZ WITH BASHIR (which should have been the Oscar winner for Best Foreign Language Film according to most industry insiders), the film provides a harrowing you-are-there experience in the cramped tank of the advancing Israeli army into Lebanon in 1982.

Making its US Premiere at the New York Film Festival this week, after triumphs at the Venice Film Festival (where it won the Golden Lion) and the Toronto Film Festival, the film achieves a visceral power by confining itself to the cabin of a tank with four young Israeli recruits. Frequently assuming the point of view provided by the tank’s telescope, the film offers a claustrophobiic world view that mirrors the characters’ psychological distress.

Maoz fixates on tangible physical details to create a taut sense of external and interior spaces, as well as of the crushing stress brought on by under-siege conditions. The soldiers, putting on a brave face but scared to their bones over the prospect of imminent death, are portrayed with remarkable emotional depth. The director repeatedly cuts to the terrified look in their eyes, and by focusing on this one mode of expression, uses an economy that makes their situation all the more horrific. However, it also invites a contemplation of compassion for both the soldiers and the captured “terrorist” whose own future is very uncertain.

Like Kathryn Bigelow’s THE HURT LOCKER, this film captures the essence of euphoria-mixed-with-terror that is the modern war scene. For those who have not experienced it first hand, LEBANON restates the obvious (“war is hell”) with an immediacy and intimacy that literally makes the skin crawl. The film will open in the United States later this year and is an immediate early contender for Oscar gold.