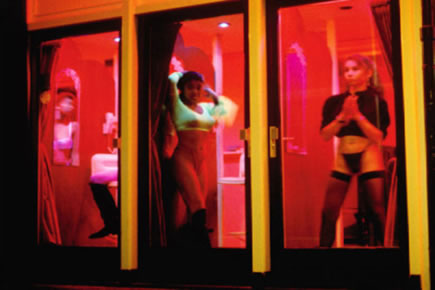 Amsterdam has a rather valid reputation as a refuge for the not completely normal. Misfits from across the continent and across the seas find the city’s open nature and history of tolerance a welcoming invitation. So, when an Amsterdam institution like IDFA, the International Documentary Festival Amsterdam, announces a program entitled “Not Normal”, the mind only boggles. In fact, one of the key themes at this year’s Festival is the theme of unconventionality (an audience pleaser here). The films are even accompanied by a parallel art exhibition at the Beurs van Berlage.  in Amsterdam. In this event, artists from various countries respond to the hot topic of the moment in our society, namely: what is normal and who decides?

The IDFA program includes eleven recent documentaries from around the world that examine that intangible asset “normal”in a number of different ways, each consistent with their national and cultural values. One section is made up of documentaries about people who, for one reason or another, do not lead normal lives. Safina Uberoi’s A Good Man (Australia, 2009), for instance, is about a marriage, in which the wife became severely paralysed soon after the couple met. In The Horse Boy (USA, 2008) by Michel Orion Scott, a couple travel to Mongolia in search of a Shaman who can help their autistic son. The aim of their search is not so much to heal their son as to find ways to give their exceptional (not normal) child as normal a life as possible.

Other films in the program investigate the ethical limits of wanting to be normal. Internet pioneer Josh Harris from Ondi Timoner’s We Live in Public (USA, 2009) predicted – years before the arrival of social networks such as Facebook and Myspace – that the internet would play a major role in the way people communicate. What ten years ago was still regarded as the domain of eccentrics and exhibitionists, is now normal and used by everyone. The internet is also central to Google Baby (Israel, 2009) by Zippi Brand Frank, although in this case the film examines the purchasing of ova (female egg cells) through a website aimed at childless couples.

The titles of the remaining films themselves illustrate the point-counterpoint of trying to define normality: I, Psychopath (Australia, 2009) by Ian Walker surveys the struggle of the violently unhinged to come to grips with their differences; Monica and David (USA, 2009) by Ali Codina is an inspiring story of a down syndrome couple whose taste for life hides their innate disabilities; The Genius and the Boys (Sweden, 2009) by Bosse Lindquist looks at the shadowy world of sex offenders; The Invention of Dr. Nakamats (Denmark, 2009) by Kaspar Astrup Schröder, the story of a Japanese inventor who expects to live to 145 years old and Transcendent Man (USA, 2009) by Barry Ptolemy, a portrait of futurist Ray Kurzweil, who predicts that within the next few decades man and machine will interact in ways that will transform the way we live, think and dream.

The not-quite-so-normals can be found both on the screen and on the streets in Amsterdam during IDFA week. For more information, log on to: www.nietnormaal.nl