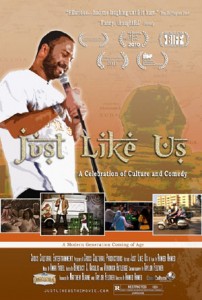 In JUST LIKE US, Egyptian=American stand up comedian Ahmed Ahmed takes us on a hilarious tour from Dubai to Beirut, Riyadh to New York with a gaggle of other Arabic and Moslem stand-up talent. Along the way, taboos of culture and geopolitics are exploded, and a younger generation of both comedy talents and audiences is born. Screened at last year’s Tribeca Film Festival, the film attempts to prove its point that Arabs and Westerners are inherently the same. JUST LIKE US shrewdly argues that hope for cultural modernization in the Middle East is partially predicated on Arabs’ ability to make fun of themselves.

Ahmed makes his directorial debut here. Via his Cross Cultural Entertainment, his stated goal is to build cultural bridges and foster greater tolerance, understanding and acceptance. The film documents four countries in the Middle East, showcasing the cultures of Dubai, Lebanon, the Kingdom of Saudi Arabia, and Egypt with sold out crowds attending the comedy concerts totaling over 20,000 people. This art form is very new to the Middle East, with older people still uncomfortable with the idea of laughing at themselves. However, the Internet has introduced this kind of acerbic comedy style to the Arab region and young people especially have gravitated to its freewheeling style and content.

That these comedy shows are a substantial hit is heartening and explains the atmosphere of increased tolerance that is being played out in the current Arab spring. Despite a growing acceptance, the film also demonstrates how comedians who are used to telling it like it is in the West can still encounter severe censorship. In Dubai, for example, jokes about sex, religion, or politics are forbidden, as is profanity, which substantially cuts back on the tools of the rather dirty-mouthed comedians. The film, which includes an all-star comedy line up of Ahmed Ahmed, Ted Alexandro, Sherif Azab, Whitney Cummings, Tomy Davidson, Omid Djalili, Erik Griffin, Maz Jobrani and Sebastian Maniscalco, goes a long way in defining both the difference and similarities in a world that could certainly use a laugh every now and then. To view a trailer and to get more information, visit: http://justlikeusthemovie.com/