There is perhaps no incident as shameful or as woefully recognized in recent American history as the forcible determent of Japanese-Americans during World War II. While the government has issued an official mea culpa and a few dramas and documentaries have been made about the period, the resonances of America putting citizens in detention camps is chilling to ponder. With this historical incident as a backdrop, a new American indie film looks at the ripple effect as two Japanese tourists embark on a journey to understand the truth behind the infamy of America’s wartime actions. 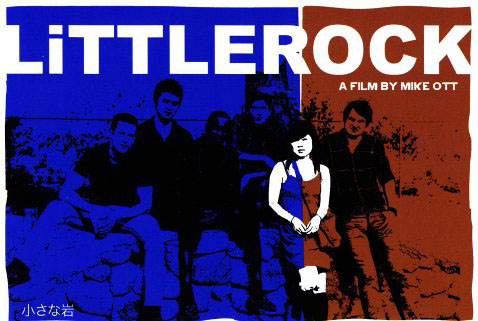 In LITTLEROCK, director Mike Ott unravels a charming indie drama that finds two  traveling Japanese siblings (played by Atsuko Okatsuka and Rintaro Sawamoto) marooned in the small California town of Little Rock, on their pilgrimage to Manzanar, California (where over 110,000 Japanese Americans were imprisoned during World War II) and where their grandfather had spent the war years. They quickly bond with locals at a motel party, despite the fact that they speak practically no English. When her brother decides to leave, the sister decides to stay in town, offering a kind of mirror to the personalities she perceives: the sweet boy everyone thinks is gay, the bully he owes money to, the black racist, the confident guy who can bed anyone he meets, etc.

There’s a dark cloud that hangs over Littlerock, and it’s the threat of that darkness that gives the film much of its emotional depth and power. This small town is representative of what’s happening in small towns across America as poverty sets in, unemployment rises and an entire generation of young people are under-employed, apathetic and dull their pain and boredom with drugs, alcohol, sex and whatever else they can find. Into this scenario arrive two rather vulnerable individuals who don’t even speak the language, let alone understand the culture. Disaster feels constantly on the horizon, yet to his credit writer/director Mike Ott keeps his eyes on the bigger picture here in exploring cultural issues, ethnic understandings, racial hatred and, ultimately, what it truly means to become community. In the film’s closing scenes, the brother and sister arrive at Manzanar and integrate this piece of American history into their recent experiences in Littlerock. These scenes are subtle yet powerful, mixing a sense of both common ground and the ramifications of segregation and racial hatred.

What is impressive about this simple narrative is that it doesn’t matter that for most of the film that nobody can understand each other.  The characters’ language barriers never get in the way of what’s really being said. Writer/director Ott resists the urge to use the East/West youth-culture clash to say something about rural Americana or to contrive some sort of hackneyed reference to local racist attitudes that are connected to the earlier Japanese internment. That connection is not altogether missing from the script, but the director wisely allows us to find it for ourselves instead of beating us over the head with obvious metaphors. His subtle approach reaps many rewards. For his work, the director  received the 2011 Independent Spirit “Someone to Watch” Award and a 2010 Gotham Award as “Best Film Not Playing At A Theater Near You”. That is about to change, as the film opens theatrically on Friday, August 12 via indie distributor Variance Films. For more information and to view the film’s trailer, visit: www.littlerock-movie.com