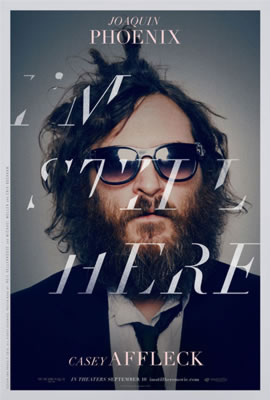 I’M STILL HERE, the not-very-flattering documentary by actor-turned-director Casey Affleck of his brother-in-law and best friend Joaquin Phoenix has been provoking controversy since it world premiered at the Venice Film Festival. Is the film, which had its North American premiere at the Toronto International Film Festival earlier this week, a true portrait of the actor’s rejection of movie stardom or is it a cleverly planned hoax?

The “documentary” of the tumultuous year that saw Joaquin attempt to ditch the acting thing and become a hip hop rapper is too wryly tongue-in-cheek to be for real. It may profess to be a sincere portrait of a tortured talent undergoing a creative crisis, but the camera is too conveniently “there”, capturing the hirsute artiste in a number of unflattering and compromising situations.

Did Affleck and Phoenix want to make their own version of BORAT? The film does contain several hilarious moments, including Phoenix’infamous appearance on the Late Show With David Letterman that seemed to show the Oscar nominated actor in meltdown mode. Maybe the makers of the film tipped their hat by actually putting in a screenplay credit for themselves…..a scripted documentary?????

One thing seems to be clear: Hollywood has not given up on Phoenix and he has not turned his back on Hollywood, and any talk of his retirement from acting is just that…..talk. Although he has not signed up for a specific role, Phoenix is said to be in negotiations to star opposite Jeremy Renner in THE RAVEN, a period thriller about 19th century writer Edgar Allan Poe. Phoenix is also reportedly in taks to star with Sean Penn in GENIUS, the story of literary editor Max Perkins, to be produced by Bill Pohlad.

The Phoenix mystery took on an extra layer when word circulated that an imposter was tricking fans by hitting the Festival’s red carpets and pretending to be the actor. So….is he or isn’t he quitting the movies for a rap music career? You be the judge.