A scarcity of Mexican production and the absence of exhibition platforms prompted Sarah Hoch to establish the festival Expresion en Corto twelve years ago which she has helmed ever since. As a publicly funded film festival, Expresion en Corto had a primary focus on short films. By 2009 it has morphed into one of the most important Latin American fests offering a comprehensive program with productions drawn from many countries, a program which stands comparison to much bigger major important festivals such Tribeca and Amsterdam. As in past years, the festivals perennials included children’s programs, the Oscar nights with short and documentary films, sex related productions at a local art gallery (including AMERICAN EUNUCHS, a documentary I co-produced), midnight screenings of horror films at a local cemetery “cine entre muertos” (films between the dead), the profiling of an outstanding Mexican director presenting Jorge Fons this year, events and screenings with the Mexican Women in Film and Television Association, and numerous feature films, retrospectives, industry seminars, pitching sessions and so forth to name but a few festival components.

The 2009 Expresion en Corto edition focused on the United Kingdom with the provocative director (or universal artist as called by some) Peter Greenaway honored as the outstanding international director. Greenaway’s impressive filmography covers 45 years with more than 30 feature films and television productions. As he forcefully articulated in the master seminar and demonstrated as the video jockey of the multi screen projection of his most recent production THE TULSE LUPER SUITCASES  at the festival, traditional filmmaking and its language is dead. New aesthetics are enabled by rapidly evolving digital production and distribution technologies. From Greenaway’s perspective linear narratives have become irrelevant. Instead image and sound and time juxtapositions, parallel information platforms, superimpositions, seemingly randomized presentations and so forth invade the viewers structured perception of reality. They generate reflexivity and access to the hyperreal thus provides a visual non-linear avenue to our postmodern society.

Several features distinguish Expresion en Corto. For once most of its funding comes from public sources, specifically the state governments of Guanajuatu, permitting with few exceptions programs that are free to the public. Close to 100 thousand individuals are reached over the festival’s ten days including a large proportion of  tourists and young people. Another unique element is having two consecutive locations where the festival program is presented; San Miguel de Allende and the state capital Guanjuato.

Like other film festivals Expresion en Corto is faced with changed economic circumstances and the resultant sudden decline in public funding and to a lesser extend private sponsorship. This interview with the festival director Sarah Hoch is the first in a series probing adaptive responses to the crisis but also assessing attempts to set up new film festivals in spite of economic constraints. 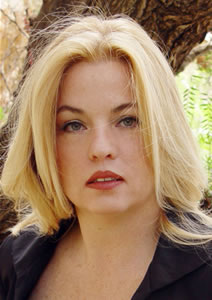 Claus Mueller: What was the lead time between you learning about possible cut backs and actually getting cut?

Sarah Hoch: We had never been officially told the amount that we would be receiving from the State Government. (Our largest and most important sponsor….even more so in difficult economic times).  We were told that the event was important to them and they would be giving us an amount close to what we had asked for.   We received 75% of what we asked for and were advised of this reduction one month before the event.  It allowed us to realize the festival but things were tight.  We were actually lucky because just after the festival was over the entire country was hit even harder economically.  It could have been worse.  We have been told now (10 months before next years event) to expect less than this year.

CM: Where is most of your funding coming from?

SH: We receive 80% of our funding through government with the balance provided through private funding and sponsorship. That is very common in Mexico.  Most of the support for the arts comes from the government sector and not private sources.

CM: If funding declines further what is your perspective with respect to other Mexican film festivals and the impact such decline would have on your programming?

SH: We don’ feel that we will be that affected  and [that we need] to reposition  Expresion en Corto with respect to other festivals [in Mexico]. Insofar as programming is concerned. We would probably reduce programming by 20% because we would be forced to reduce venues. We would have to reduce invitations to press, actors and directors because of airfare and hotel costs. We don’t foresee that at this time. Thus the most likely cuts will be in the reduction of venues since most of our venues are not movie theatres and it is very expensive for us to condition them for screenings.  And as stated before we will have to extend fewer invitations.

CM: Will there be less international films shown in the future?

SH: NO. It doesn’t cost us more to have international films since embassies [of the countries concerned] help covering the shipping expenses.

SH: There will be cutbacks from both sources, but we will continue to have governmental support.

CM: Does film festival tourism help in getting funding?

SH: ABSOLUTLEY!!  Our statistics on tourism are very high.  Our event brings in 88 thousand people.  Our government funding comes through the State Tourism Office.

CM: What is your influence over funding decisions?

SH: It is high. We have a highly respected and successful event.

CM: I understand that you are also commissioner for film for the state of Guanajuato. Does that give you an advantage over other film festivals in Mexico?

SH: I resigned from that position last year.  I actually think it is now working to our advantage that we are separate [entities].  I think it helped early on to bring funds to the event but [the festival] got so big it needed to be separated.  I also couldnt do both, there just werent enough hours in the day.  But yes, in the beginning it was very helpful.  I founded both:  The Film Commission and the Festival, though the festival, a non-profit endeavor, was coming first funded by the private sector.

CM: What makes Expresion en Corto so different and unique?

SH: It’s honest, inclusive, passionate, ambitious, a risk taker, true to its platform for promoting young filmmakers, yet always reinventing itself.  I also think holding it in two of the most beautiful cities in the world helps immensely.  Everyone wants to come here.

CM: From your perspective has film festival funding more priority than other [cultural] areas?

SH: It is as important as [other cultural] programming, the conferences,   and so on. [The film festival] is, unfortunately, the most time consuming!

CM: What about the argument that there too many festivals. Does it apply to Mexico?

SH: There are many here and growing. A growth resulting in part because of the success several festivals have been having. And you need to remember that when we started Expresion en Corto there was just one other film festival in Mexico,  La Muestra de Guadalajara and it was suffering from the entire economic crisis that was happening in Mexico.  This crisis had SERIOUSLY hit the film industry and the country was producing around 5 films a year.  You cannot have a festival with such a small number of films.   That’s why our platform was so important and so significant to the re-building of the Mexican Film Industry.  There is competition for funds.  But we have tried to stay true to our platform and we have our unique original identity, the only one like it in Mexico.

CM: Apart from the audience, who would be most affected by the cut backs?  Young independent film makers, established film makers, international film makers?

SH: I don’t think it will affect either very much.  I think we will be able to turn in a quality and diverse event.  I dont think these groups will feel the cut backs.

CM: What is your advice to other film festival directors who are in the same position? Or to those who think of starting a film festival?

SH: Think outside the box.  Creativity is everything! And for those thinking to start a film festival, know that this is terribly hard work and it wont make you rich.

CM: What are your plans for the next edition of Expresion en Corto?  How are they impacted by the funding problem and the changed economic circumstances?

SH: Our plans are ambitious, exciting and we are joining in on our national bicentennial celebration of Independence.  We are not thinking about budget cuts at this time.  We never do.  In Mexico we are used to not having the money we need.  We never look at it as, “Well, we have a million dollars, well throw a million dollar festival.”  We make our plans, dream our dreams and make our budget accordingly.   And then we work extremely hard to get there.  If at the end of the day we cant pull it off we start cutting, but we are clever with cuts too.  You wouldn’t know we cut by looking at the event every year.

CM: Sarah, thank you for your comments and time.