One day after the historic election that promised to dewax America’s ears, New Yorkers amped up the global love-in with a celebration of Indian cinema. The eighth Mahindra Indo-American Arts Council Film Festival, running November 5-9, features independent arthouse fare made on Indian soil as well as Indian-themed productions made abroad, either by Indian or non-Indian filmmakers. Its mantras of reaching out beyond national borders and bridging diverse tastes and traditions vibe perfectly with the transcendent moment of this double stepping-out party.

The “Mahindra” of the festival title is neither a benevolent deity nor a cultural arm of the Indian government, but rather a Mumbai-based company whose tractors command 20 percent of US marketshare and whose fuel-efficient SUVs are coming to a dealership near you in the next year or two. Mahindra’s MIAAC sponsorship is a corporate social responsibility play that, if the karma is right, can bolster quality Off Bollywood films. But it is also a branding initiative meant to “create a band of influence” for the automaker long before its first “guilt free” hybrid is unleashed on the US market, explained Jay Shah, Deputy General Manager of Corporate Communications with Mahindra & Mahindra Ltd.

Shah singled out Mumbai-set Slumdog Millionaire, a Dickensian Ramayana hepped up on director Danny Boyle’s adrenaline, as the ideal crossover entertainment to help rev Mahindra and MIAAC to the next level of brand recognition. “We want to create a festival that is as recognized as Toronto,” he said. “It’s not only about presenting good films, but also about cultivating a marketplace for Indian film abroad.”

Part of this strategy is to “impress on cinema-lovers that arthouse cinema is not that different from Hollywood/Bollywood cinema,” noted Shah. In selections from Apoorva Lakhia’s razzle-dazzle gangster flick, Shootout at Lokhandwala, to the nonfiction story behind it, Liz Mermin’s Shot in Bombay, and from Kehtan Mehta’s epic biopic of iconoclast Raja Ravi Varma, Colors of Passion, to Sooni Tarapolavala’s soccer satire, Little Zizou, the MIAAC slate boldly conflates mainstream and more artsy traditions to ply its Obamaesque vision of inclusion. 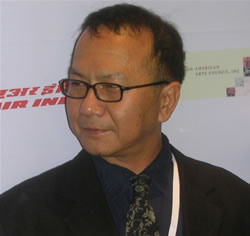 “Most people are intrigued by Bollywood, but I don’t think they can sit through three hours of it,” said festival director Somi Roy. In making his selections, Roy looks for “independent and diaspora filmmakers approaching India on their own terms as an artist.” In keeping with the festival’s subtext of honing identity, most of the emerging and veteran filmmakers in its roundup straddle both cultures. Said Roy, while their films might contain a “wink and a nod” to Bollywood conventions, they also “speak a cinematic grammar familiar to a Western, American audience.”

As Roy and his fearless colleague, Aroon Shivdasani know, creating a beachhead for South Asian cinema in America takes more than just public screenings. Capped by an awards ceremony, MIAAC’s program of seminars, workshops, discussions and parties encourages critical conversation among lay audiences as well as the independent film industry and other media professionals.

Too bad the promise of these exchanges is crimped by the American Film Market, which pins down key industry players in Los Angeles just as MIAAC unfolds on the other side of the continent. Notwithstanding that dealmaking juggernaut, there’s plenty of room for the festival to grow into a more business-friendly forum in future years. As is, “one needs to do one’s own homework to set one’s own appointments,” said Colors of Passion producer Anand Mahendroo. To be sure, the festival has its work cut out for it as it seeks to become a more relevant force in promoting Indian cinema.

Still, Mahendroo commends this “small and niche festival” as a “launching pad,” and echoes its upbeat mood as he considers the prospects for South Asian cinema, even in subtitle-shy America.