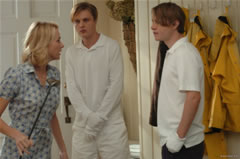 It is a very rare thing indeed for a European director to have the opportunity to remake a small art film in another language (the only other recent example was Dutch director George Sluizer’s THE VANISHING). But Michael Haneke is that rare director. The English-language version of his domestic thriller FUNNY GAMES, originally shot in his native Austria in the German language and starring Ulrich Muhe (the Stasi spy in THE LIVES OF OTHERS) has just opened in the United States, with an all-star cast that includes Naomi Watts and Tim Roth. The distributor is Warner Independent Pictures, the independent arm of studio giant Warner Brothers.

Although the film may seem like a Hollywood production (which is part of its marketing appeal), it is in fact a thoroughly European venture. The film is co-produced by Dreamachine, Halcyon Pictures and Tartan Films of the UK, Celluloid Dreams of France and X-Filme of Germany, and has been sold internationally by Celluloid Dreams. The idea of re-making it in English was designed to expand beyond Haneke’s usual distinct arthouse audience and to make a deeper impression in the United States. Haneke is reportedly interested in helming a film in Hollywood.

In films like BENNY’S VIDEO, THE PIANO TEACHER and CACHE, Haneke has explored the fear and violence that flow like poison behind the facades of bourgeois life. In FUNNY GAMES, he offers a bourgeois family (Watts, Roth and ten-year-old actor Devon Gearhart and Roth) who are terrorized by fresh-faced Aryan preppies (played by Michael Pitt and Brady Corbett). The young men bind, gag, maim and terrorize, but never lose their bland smiles or their upper-class manners. Their real game is power.

The English-langugage version is a shot-for-shot, line-for-line remake of the 1997 original, with the same scary red credits and screaming-horror heavy metal soundtrack. However, the film is a distant cousin to the “torture pornography” of the SAW and HOSTEL series, which also delight in pain and power. The film is attempting a very delicate balancing act. On the one hand, it is being marketed to appeal to the male teenage audience that seems to delight in this sub-genre, while not alienating Haneke’s supporters in the arthouse crowd. In Europe, the English-language version is being treated as an art film, but the marketing campaign in America is more lurid and sensational, hoping to cash in on a more mainstream audience.

However, the film mixes both graphic physical violence and psychological terror with an artist’s eye. Haneke also makes us as audience members complicit in the action, voyeurs who delight in watching the slow, painful torture of a normal family. The director comments that simply by sitting there in the dark, we are guilty of turning violence into entertainment. On any terms, this is tense, brilliant filmmaking, a grotesquely skilled exercise in Snuff Guignol. Its cool sadism has its roots in such earlier films as Stanley Kubrick’s A CLOCKWORK ORANGE, Roman Polanski’s CUL DE SAC and Sam Peckinpah’s STRAW DOGS.

Like French filmmaker Gaspar Noe, Haneke taps into our attraction and repulsion to graphic imagery and the anything-goes era that we now inhabit. The film, which is not for everyone (I personally closed my eyes during many scenes) but it held me with its primitive fear factor.

How it will do in the marketplace is rather uncertain. It debuted this past week at number 22 in the box office chart, opening on 275 screens in the United States (not huge, but not small either). So far, in the first week, the film has grossed less than half a million dollars, which is certainly respectable. It remains to be seen what happens after the initial teenage audience runs its course and if older audiences who have followed Haneke’s career will also show up. This is one worth monitoring.