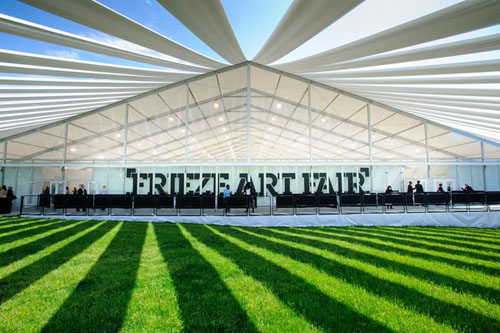 It has been estimated that the approximate value of art work shown during the Frieze Art Fair from May 8 -12 exceeded $2 billion. This also includes work exhibited during this period at other shows at the same time such as the Downtown Art Fair, Pulse, and the show organized by the New Art Dealers Association (NADA).  By far the largest fair, Frieze showed artist from 28 countries represented by galleries selected by the Frieze curators, including more than 50 from New York.  More galleries could not be accommodated, a situation similar to the Downtown and Pulse fairs.

Given the interest of our readers this review focuses on moving images, the use of video and film in the art works shown. Compared to other large art shows held in the past, few exhibits incorporated moving images with most of them originating outside the United States, specifically in Europe.  Several discussions with gallery representatives handling this art work seem to indicate that here has been a declining interest in art involving moving images. Most of these representatives were also surprised about the scarcity of such work at the Frieze and other concur rant exhibitions and suggested that the market for this niche art has been shrinking and that this trend is reinforced by curatorial impact.

This perception has been articulated by Trevor Guthrie Marck whose superb “Tank” mixed media video loop installation was at the Downtown Fair. He is intrigued by non-linear and non-static narratives as reflected in the moving modified shapes of objects creating space for the viewer’s interpretation. Queried about the significance of video art he responded that such art “remains a niche product and that in the commercial sector we [the artists] cannot be saved in the future… given the flood of information without content” Similar views were held by other video artists who see their future in the non-commercial non- profit realm. A possible outlet is the non-profit Artists Space group which presented selections from its members during the Frieze show, involving numerous moving images pieces. Another entry point would be the non-profit NADA show which was free but did not draw a large audience compared to the other fairs.  Fabian Knecht repped by a Paris based gallery showed there the intriguing video of his performance VERDRAENGUNG (repression) piece featuring the repression of memory. Other recorded performance pieces were also shown by some galleries such as THE MIRROR by Joan Jonas at Frieze as part of a sculptural installation from the British Wilkinson Gallery. Concerned with the relativity of perception S-Mei Tse’s video GEWISSE RAHMENBEDINGUNGEN (certain contextual conditions) on a square flat-screen playing a moving crystal ball with clearly reflected upside down images, blurred colors and shapes. Kaspar Mueller’s FOREVER ALONE AND AROUND THE WORLD, a most impressive video mesmerizes the viewer through its sophisticated digital manipulations of subdued color imagery. The New York based Simone Subul Gallery presented at Frieze Florian Meisenberg with his shifting and juxtaposing images from one medium to the other, forcing the viewer to generate meaning. In THE OMEGA POINT JUST ATE HIS BRAIN Richard Sides who hails from London presents a multimedia installation involving documentary urban sequences alternating with animated abstract ones overlaid by a narration. Also at Frieze was Joonho Jeon extraordinary animation of a full screen landscape using a North Korean bank note with tiny helicopters installing the word welcome on top of a forest. When they clash the forest and thus the banknote burst into flames. The not so subtle but superbly executed message appears to be that westernization involves destruction. Credit is certainly also due to Candice Breitz from the Johannesburg Goodman Gallery for THE INTERVIEW a dual channel installation of separate interviews of two well-known Nigerian star actors who played child characters in a 2002 Nollywood blockbuster. This unconventional mix of a biopic and a documentary provides immersion into a decade long acting partnership and the booming Nollywood industry.