Documentaries screened at the 2010 Tribeca Film Festival tended to be superior to the feature films in its program an assessment not disputed by its creative director Geoff Gilmore. In one of the seminars Gilmore acknowledged that the Sundance festival which he had directed before coming to New York experienced the same discrepancy. Similar to the US market position of foreign language films, documentaries play a minor role at the US box office. In the 2009 U.S. total box office of $10.6 billion, documentaries among the 100 top grossing productions generated only $60 million. In 2009 32 feature films collected more than $100 million each; up to the astounding $750 million that AVATAR took. The top three films, including AVATAR had a box office of $1.4 billion. According to Box Office Mojo since 1982 only 12 documentaries grossed more than $10 million each in the United States, four produced by Michael Moore totaled $178 million with four productions on nature and the environment in the next successful group scoring $162 million at the box office. OCEANS, released in April 2010 has netted thus far $19 million. The success of Moore’s feature length political films and those covering nature issues led to animated discussions about the positive outlook of documentaries, prognostications which were unrealistic. Of the 150 top grossing films in 2009 only 3 were documentaries. Tracking documentary over the last fifteen years, these films had an average market share of a little more than 1 percent scoring on the average $2.2 million, the lowest average gross per film of any genre. This is not too surprising. Because of their topical time bound nature documentaries have a shorter shelf life, whereas genres such as comedy, adventure, drama, action, thriller, horror etc can be recycled over various platforms for several years. 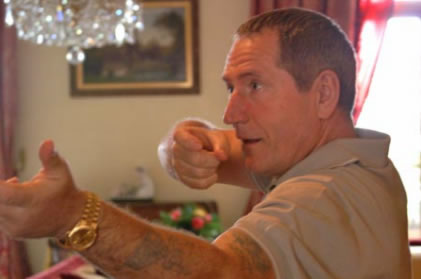 If measured in box office receipts success for documentary productions is an uphill struggle for the US American filmmaker unless he works in the safe haven of HBO’s documentary divisions or public television. For European film makers acclaim and exposure is easier to attain, given the extensive subsidy system and public sponsorship through arte, euro-media, German Film Foundations, and major public television stations to name but a few funding sources. Thus there is much less of a need for Europeans to rely on income from theatrical distribution. Further, it is rare that a documentary film maker knows how to package important political or social issues in a mode that appeals to the main stream audience as demonstrated by Michael Moore.

The Russian film makers Alexander Gentelev provides with his Tribeca contribution THIEVES BY LAW a perfect demonstration of effective documentary film making. Having spent 10 years on researching and producing the documentary THE RISE AND FALL OF THE RUSSIAN OLIGARCHS he was in a perfect position to document the ascent of the Russian mafia to economic and political power in Russia. His THIEVES BY LAW is most attractive given the universal theme of organized crime, a well paced fast moving script structure, excellent cinematography, and narrative providing new and stimulating information. Last not least , there is a strong voyeuristic element with the viewer observing in vivid colors the personal history, luxury life styles, and crimes committed by three prominent mafia bosses, thus we enter the life style of the rich and famous Russian Mafiosi. The film makers succeed in getting an inside scoop on the Russian mafia, greatly helped by the three articulate cooperating Mafia dons. In this clear visual discourse on the development of the Russian mafia as it responded to the political and economic changes in Russia, we can observe the transformation of these Russian mafia dons into successful businessmen working now closely with Russian governmental agencies. Excellent archival footage of gang war fare between different factions of Russia’s organized crime including group killings, explosions, and all forms of violence reinforced through interviews with senior officials from Russia’s organized crime force provide an ideal context for the story. As distinct from their American and European counter parts Russia’s ‘former’ mobsters are involved in the energy, chemical, transportation and manufacturing industries. Traditional endeavors such as protection rackets, prostitution and drug dealing have receded. They run their businesses from inside Russia or France and for several years Israel, have close contact with Russian government officials and enjoy a greater respect by the Russian population than the police do. Thus in a Russian survey 75% of the respondents indicated that they have more trust in criminals than in the police. All are apparent billionaires. One , Leonid ‘Mackintosh’ Bilunow who lives in Paris and the French Cote d’Azur has a close rapport with Russia’s prime minister Putin and is engaged in philanthropy in the mode of US Robber barons from the 19th century. The second don, Alimihan ‘Taivanchik’ Touhitakhounon parades as a business man disputing that there is today in Russia organized crime since the need for it has disappeared. He also emphasizes that government officials are the true criminals since “they have left hundreds of thousands of people destitute”. The third, Vitaly ‘Bondar’ Dyemochka, who has spent 18 years in prison, is preparing a film about his murderous exploits. All have spent long years in prison where they were trained in criminal skills, solidarity and obedience to crime families after joining the THIEVES BY LAW fraternity. In the film they take pleasure talking openly about the murders and crimes they committed in the past knowing that there is no prosecution, but they also state that they would act the same way again if they had to start all over. As the Russian senior Interpol official, General Vladimir Ovchinsky, puts it succinctly,” Russian law was written under the supervision of criminal organizations…. They are inseparable from the organs of government; they have a major influence on economic decisions and even on political decisions”.

A totally different approach to documentary film making is presented by THE ARBOR directed by Clio Barnard from the United Kingdom. THE ARBOR was probably the most ambitious documentary in Tribeca’s program from a formal and substantive point of view. The documentary reenacts the troubled life and family of Andrea Dunbar, a British play right, and takes place in the housing project where she lived. On both the narrative and documentary level THE ARBOR uses the Brechtian Verfremdungs approach, the ‘V effect,’ to convey the story of a family beset by dysfunctions in a decaying working class neighborhood, the Arbor housing project. Different layers of meaning are juxtaposed and the story is reenacted using Andrea Dunbar’s plays , though the primary source are hundreds of hours of audio interviews with relatives, neighbors and associates of Adrea. Most startling is the lip synching of the text of the interviews by few professional and many lay actors and the staging of sequences of her play in the common yard of the project. Clio Barnard’s approach detaches the viewer not permitting any emotional identification, yet at the same time there is a sense of closeness and empathy. More importantly one gains a clear understanding of the interlocking dynamics of a problem ridden housing project , the pathologies of family interactions fostered by alcoholism and drug use, and the desperate survival attempts of individuals caught in this context. THE ARBOR reveals Barnard’s mastery of innovative detached story telling techniques drawing.

THE WOODMANS by Scott Willis (USA) is an extraordinary portrait of a family of artists whose daughter committed suicide and only became world famous through for her photographic work after her death. In this family the creation of art prevails over all everything else. In the documentary the daughter is recreated through a demonstration of her work presenting a perfect parallel between the comments and the photographs. The parents provide a perceptive but somehow detached interpretation of their daughter’s suicides and arrive at the painful recognition that what killed the daughter was also responsible for her achievements as an artist. Michel Madson from Denmark presents with INTO ETERNITY an ecological mind bender. Tunneling several miles underground Finland is constructing in a remote location an underground storage facility to dispose of thousands of tons of Finish unclear waste, to remain untouched for 100 000 years. Both the theme and the cinematorgraphic approach reminds of Werner Herzog, the absurdity of hiding Finish nuclear waste when there are already 250 000 tons of nuclear waste in existence, the semi-poetic narration and the reflection about our relation to nature. INTO ETERNITY is certainly thought provoking since it poses the question of the futility of our existence. Another documentary of note was Jeff and Michael Zimbalist (USA, Columbia) THE TWO ESCOBARS depicting in a parallel story the rise of Andres Escobar as a famed soccer player and the career of the unrelated Pablo Escobar, a fanatic soccer fan, who turned into Columbia’s most notorious drug lord. Pablo Escobar gave rise to narco soccer and was responsible for funding Columbia’s development into an internationally acclaimed soccer nation. For the soccer game sequences, there is superb editing. Apart from the technical refinement of the film, THE TWO ESCOBARS offer an intriguing image of the drug politics besetting Columbia with the country falling into chaos when the iron fisted rule of Pablo Escobar is over after his assassination.

Let me finish with praise for an Indian feature which presents a perfect Road Movie. Dev Benegal’s ROAD MOVIE is an homage to the genre and to film making. Vishnu drives a beat up truck across India housing a touring cinema with dilapidated film projection equipment and shows films while overcoming the obstacles of his journey. Travelling, he picks up as fellow passengers a young boy, an old entertainer and a beautiful young woman facing adventures on the way in their quest for water in the barren landscape and the location of a fair the entertainer wants to reach. We meet an assortment of strange characters including impoverished peasants, desolate policemen, gangsters, and people searching for water in the desert. Apart from the incredible cinematography of ROAD MOVIE there is a strong surreal flair in the film’s narrative. The magic of what we see may just be magic but the images become part of our perception.

Overall, the Tribeca 2010 documentary selections were surprising in strength and appealing in their quality. Different approaches selected by film makers and the breadth of the themes chosen were certainly impressive.