Oscar-nominated actress Natalie Portman joined her business partner and film developer/new media entrepreneur Christine Aylward to discuss the launch of their new website, www.makingof.com, at a special event in the Filmmaker’s Lounge during the 2009 Tribeca Film Festival. As they explained, the site is meant to be a gathering place and resource for filmmakers and fans of filmmakers alike. Their web project hopes to transform the way people view, enjoy, and participate in the filmmaking process. 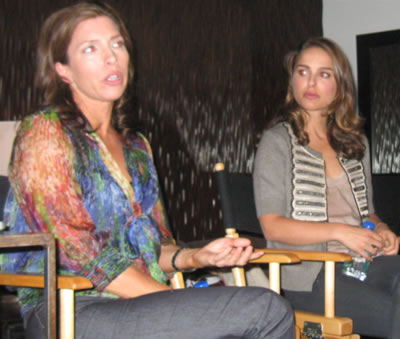 The Israeli-born Portman, of course, is the actor who received international attention when she landed the role of Queen/Senator Amidala for Star Wars Episodes I, II, and III. This helped her get parts in Anywhere But Here and Where the Heart Is but she really came into her own with films like Garden State, V For Vendetta (where she shaved her head) and The Other Boleyn Girl. When she played the ex-girlfriend in Darjeeling Limited she did an accompanying 13-minute short, Hotel Chevalier for director Wes Anderson and offered her sexiest performance yet. As an accomplished actress, she has performed in such established plays as Anton Chekhov’s The Seagull and The Diary of Anne Frank, and garnered her Supporting Actress Oscar nom for Closer in 2004.

She also graduated from Harvard University where she studied psychology. Later on she directed her first short, has actively supported various humanitarian and animal rights causes, and has been romantically linked with various actors or musicians such as neo-hippie Devendra Banhart. She is also an entrepreneur having started an aborted vegan shoe line (its partner company dissolved through this econ crisis) who is now launching this media company with Aylward as CEO. The two had met on a film set and came up with the idea of a behind-the-scenes, insiders-look web portal off-the-cuff during a dinner.

The following interview was drawn from the Q & A session after they announced the launch before a small group of film professionals; it is boiled down to Portman’s remarks and her response to several of my own questions as well.

NP: Christine [Aylward] and I have been friends for a few years now and we were talking one night. I said, “I wonder why there isn’t a website that sort of encapsulates the experience of visiting a friend on a film set?” Because every time a friend of mine came to visit I was reminded about how exciting a place it is to work and was reminded about how little we all know when you’re just a movie-goer of all the different aspects that go into making a film.

The site is supposed to encapsulate that experience and give access to people who don’t have a friend that they can go visit on a film set. So they can say, “How did they do that?”

There are jobs that exist on films sets which people don’t even know about. We can give an insight into that and offer that experience for the serious burgeoning filmmaker. There’s this whole generation now of people who are making their own movies with youtube and similar sites. I’m sure that they want expert advice or the opportunity to see how it looks up close. So that’s the goal of the site, to extend that access to everyone.

Q: You’ve worked on small indie films and very large studio films. How do you compare those experiences; the good things, the bad things, and being behind the scenes?

NP: The thing that unites all film experience is that it really is a team. It’s a collaboration between so many people. There’s actually this [David] Mamet line that [I think] Mike [Nichols] always quotes. So I’m going to quote the quote. “Film is a collaborative process. Bend over” [laughs].

It really is a collaborative process though and there are so many people who contribute in ways that are not highlighted. It’s a really exciting opportunity to get to focus on those people. Also, [film-making] is such an insider industry. So many people learn to do what they do because their parents do it. You see on film sets a lot of time that the camera operator is the father of the focus puller and the makeup artist is the mother of the hair stylist. It’s very much like that. It’s really a family business and that makes it even more exciting to open that access because that’s how people get access.

It’s not like people come out of film school and get hired on movies. A lot of times the access is who you know and you learn by doing. You learn by being on the job. The goal of this, and obviously it’s a work in progress and we’ll be amending as necessary, as we go on, but the hope is to really let people learn by doing, learn by experiencing firsthand. Q: So the site is for people who want to learn what a grip is and for people who want hear expert advice from director Ron Howard?

NP: Yeah. It should be, like, [for] the kid who asks, “How did they do that explosion in the Bond movie?” to the person who’s says, “What lens was he using when he got that very specific shot?” or whatever. The goal is to have that range.

Q: You’ve talked about the Vault section of the site; you’ll be able to watch whole movies or just clips of things?

NP: It will have the making of related things with movies that are already past being in theaters. So we’re hopefully getting archival things. That’s what we want for the future on the site.

Q: Did you do some of the interviews yourself that we see?

Q: Did you learn anything that you didn’t know before from watching some of the other interviews?

NP: Absolutely. The interview I actually did was with [director] Jim Sheridan who I worked with recently and it was so exciting to get to ask him questions. It’s so formal to ask those questions with someone that you know and to have that opportunity was really incredible.

One thing he said that was really helpful to me was about the sort of impossibility of screenwriting because how do you describe the look on the child’s face that has just learned that his mother died, when you open the door and reveal his face. How do you put that in there. He said that’s the problem because it’s such a visual medium and to really write something that describes what you’re going to see is impossible and that’s half the impossibility of getting anything made.

There have been so many things from different interviews, but it’s nice to get insight from really disparate points of view that a lot of times you don’t get to hear. It gives people ideas, too, about the opportunities that they could have on films, what are the many aspects that go into it and what’s the process behind the many aspects.

Q: Do you see the site as connecting, say, a hairdresser with a production company or things like that?

NP: In terms of connecting people, I think one of the future goals for our interviews will be to have filmmakers interviewing other filmmakers so that they’re asking the exact questions. If you’re a costume designer what would you ask a legendary costume designer? If you’re a casting director what would ask of…. So in that we connect those people and have interviews in that way too.

Q: And what do you have planned for the future–an international version?

NP: As I said, this is a “work in progress.” We just launched this [on April 23rd, 2009] and we’re very excited. There are so many opportunities, and yes, definitely [we are planning that]. That’s such a great opportunity that the internet has brought us. One of the things that I always bemoan in the United States is how little access we have to so many great films from the rest of the world. In cities like London and Paris, I think you get a lot more exposure to that stuff. So it would be really exciting to use this as a tool for that, but not yet.

Q: Will you be capturing content from the post-production process as well?

NP: That’ll be in the “Filming Now” section.

Q: In your message to consumers what are the key differences that they’ll find on your site than they might not find on a DVD that they’ve purchased which includes sections about the making of a film?

NP: It’s like [we are going to be] a centralized resource. So if you’re a big Michel Gondry fan, our hope for the future is that it’s not just Eternal Sunshine, but you click on it and you’ll get his commentary on all of his movies or, if you like him, then here’s other directors like him, or also people who you don’t normally see interviewed on DVD stuff like editors, cinematographers and design people.

So you get insight into different aspects of the film and also, if you’re into one of those other areas, you can again, like, see the archived [stuff]. Lets say there’s one costume designer that you love or you just want to see all costume designers or you want to see all action movies; the goal is that it’ll be a centralized resource with archived materials that the serious student can go to. Obviously we’re building [it now].

Q: What have you learned about the internet that you didn’t know before?

NP: Wow. It’s a huge process and I’ve learned a lot from watching Christine lead the way of creating the business and building a website. It never even occurred to me, all of the elements that go into it. That could be a whole other MakingOf. It’s incredible. I didn’t realize everything that goes into it and it’s been very impressive to witness and learn about.

Q: One exciting thing about the site is that it encompasses the whole business of film, from accounting to acting.

NP: This is really where we will expand and that’s the goal. I think it was one of the Naked Gun movies in the credits, I remember seeing this as a little kid, that said ‘what the hell is a dolly grip?” You watch the credits and if you don’t know–if you haven’t been on a film set–you’re like, “What? What does that even mean?” So, yes, most people would be like, “Why does a film need an accountant?”

Q: And, if they’re not an actor or director, still be inspired.

NP: Exactly. The goal is really to give an impression of [what] everyone does. We don’t have a specific thing [in mind].

Q: What are you hoping that people will say about the site after hearing about it now?

NP: Again, the goal is to give the user the experience of being a part of the process. I think you should feel that. [As for] the end goal, as I’ve said, we’re a work-in-progress and just starting out, but our goal is to have everyone feel like they’re a part of the crew and that they know the elements that go into the filmmaking process so that they can experience it in a very personal way. That’s our goal.