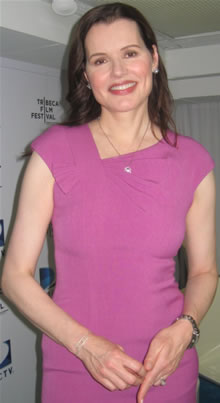 Every film festival yields an unexpected treat and this year’s Tribeca Film Festival is no exception. With the premiere of Accidents Happen, the 51 year old actor Geena Davis steps into the spotlight again, this time by doing a quirky little indie–the feature directorial debut of composer and short filmmaker Andrew Lancaster–shot in Australia but set in the 1980s Connecticut.

For this Oscar winner, her startling and starring reappearance makes for a snappy and sharp-witted comeback. At a time when dysfunctional moms seem to dominate the news and daily talk shows, Davis plays a flippant Gloria Conway, the maternal head of a decidely distraught suburban family traumatized by a fatal auto accident in which one of the kids is killed and another is brain damaged.

Though partially responsible, 15-year-old Billy (Harrison Gilbertson) has become the de facto glue that barely holds together his bitter mom, distant brother (Harry Cook), and disaffected, disenfranchised dad (Joel Tobeck). When Billy starts to act out his anguish, things change for him and his family in this visually provocative, wry drama. Having been once married to such A-type arch personalities as actor Jeff Goldblum and director Renny Harlin.

With a career that has had her playing the first female president, Mackenzie Allen in Commander in Chief (a short-lived but critically appreciated television series) as well as a feminist culture hero in Thelma and Louise, the still svelte six-footer has established her range and smarts. Once she had been tapped to be in Tootsie, she soon proved her versatility and has done over-wrought adventure films (Cutthroat Island), crime-noir (The Long Kiss Goodnight), comic-drama (A League of Their Own), arch sci-fi (David Cronenberg’s The Fly remake) a Tim Burton film (Beetle Juice) and won an Oscar for The Accidental Tourist.

Q: You went to Australia to essentially make an American film.

GD: Well, it struck me as odd, definitely. It was like, “Why aren’t we shooting this in Connecticut?” But it actually turned out great. We wouldn’t have had these incredible actors, and it was fun. I love Sydney. I love Australia. I always say that if I had to move I would move to Sydney. I loved it there.

Q: What kinds of adventures did you have there?

GD: Well, some run-ins with emus [Australian Ostrich-like birds] and there were some koala [bears] that were jumping out of the trees at me. We went to play bingo in Maroubra [a beach-side suburb of Sydney].

GD: Bingo. We went to the bingo hall and there was a bingo parlor near where Sarah lives. It’s this little kind of crummy building and in the basement. We went, and it was all old people. Instead of chips they had these stamp things, like you stamp a little dot.

Q: Did you play for money?

Q: Did you eat any weird foods while in Australia?

GD: Foods? No. I have to say that for someone coming from and living in L.A., Sydney [offers] the least culture shock you could possibly encounter in going to a foreign country. It’s like L.A. only a little askew. They drive on the other side of the road, but you don’t have to figure out, like, “How do I take the subway…” or “What’s the money?”

Q: Did you have any Australian wine while you were there?

Q: The culinary scenes in the film were fun–especially that mysterious mixture. What were you actually eating?

GD: It was like canned stew. It was fine and tasted good.

Q: Were you the only American in the cast?

Q: Did these old cars bring back any memories for you?

GD: Oh, yeah. The prop guys were keen on teaching me to drive the car that I drove. I was like, “Are you kidding? This is what my parents had. I’ve driven this kind of car a couple of times.”

Q: How was it working with all those young Australian actors?

GD: All these guys are so sweet, like the sweetest guys on earth. When we first met, one of the very first things that we did was to have a read-through around the table. I was sitting next to Harry [Gilbertson] and there’s a word that’s not in the movie anymore, a profoundly vulgar word that he had to say. We get to that scene and it’s coming up, and he says the line and says the word sort of quietly and goes, [whispering] “Sorry.” I think he might’ve even gone, “Sorry, Mrs. Davis.”

Q: How did they feel about meeting you?

GD: Later they told me that they were so nervous about meeting me. I thought, “Oh, I really should’ve been like, ‘It’s Mrs. Davis, please…’ just to torture them a little bit [laughs]. But they were nervous enough.

Q: You didn’t call them on their American accents and make sure they were good? Did they keep you fooled?

GD: They were good, very good. They did a great job, really.

Q: How did the role you played personally resonate with you?

GD: I always feel like when I play a character, you just have to find that part of yourself instead of imposing something from the outside. So I had to find a part of me that could relate to feeling helpless and lost, but try to cover for it and try to rise above it and put up a shield. I think it’s something that people can easily do to a lesser degree. I think it’s just how big the circumstances are, how much you’re forced by self-preservation in that particular way—denial and blocking and blaming other people.

GD: I think she feels horribly, horribly guilty about it. Her way of surviving was partly to put it on her husband, and try to force others to carry the burden and develop this sort of defense mechanism of outrageous language and vulgarity and brash personality as a way to keep people away. Also, it’s from facing her own pain.

Q: Why is she guilty?

GD: Well, I [won’t] tell you in specifics [or it might ruin the movie], but I think that in general, any mother—if anything happens to their kid, it doesn’t matter what the circumstance was—you would always feel like, “If I hadn’t let them be there, if I hadn’t…” There’s nothing worse than having your child die. I think it’s that.

I imagined that she was going over that situation—that I was needling everybody and was yelling at the kids and so they fought. I didn’t tell him enough to slow down, and all of those things that just probably wrack your life forever.

Q: Was this film specifically designed for you?

GD: No, not specifically.

Q: You’ve done television, big studio films, and now independent films. How do those experiences contrast–for a while you were in the television arena and now doing this opens must open up a whole range of new opportunities…

GD: Well, I hadn’t avoided independent films. It just somehow never happened. I never got offered a part in an independent film that I wanted to do. So it’s not like you made it sound, that I’m now in my independent film phase [laughs]. I don’t know what’ll happen. I would be happy to do more.

Q: How different was this experience from working in television?

GD: I don’t find any of them that different. This was actually a lot like TV in that you shoot so much faster, so many more pages a day than a pricey film. But I like all mediums. I don’t really do plays, but as far as TV and films and everything, I like them all. It’s really just what the part is. I didn’t notice…it didn’t have pop-outs, my trailer. It’s true. I did notice that [laughs]. But what I’m saying is that it was very similar.

GD: It had a more personal impact on me, a more real-life impact than acting, because I’d been so un-athletic, and was sure that I was uncoordinated until I got cast in A League of Their Own and had to learn [how to play] baseball. The coaches were like, “You’re picking this up fairly fast.” I was like, “I have untapped athletic ability!”

Then I did some action movies. That spurred me to take up archery, and I became a sort of fanatic about that [to the point where she became a women’s Olympic archery team finalist in 1999 but failed to qualify]. So it changed my feeling about my body and my physical abilities a great deal. What I didn’t realize until later is that competing in tournaments was so satisfying.

But I think it’s because it’s the exact opposite of having a movie review, which is utterly subjective. It doesn’t matter what you wore to the tournament. It’s the points—did you hit the bull’s-eye or not—and that’s very satisfying. You can look at it and count instead of wondering.

GD: I haven’t lately because of the kids. I’ve been busy, but it’s not age dependent so I think I can take it up again at another time.

Q: Since you’ve never done that before, what would bring you to the stage?

Q: You don’t have anything coming up?

GD: Listen, I’ve never known what I’m going to do next when I finish one thing. I don’t know how people do that. I’m always like, “Sharon Stone has four movies.” She’s got this in the can and then this… But that’s never ever happened for me. I never know. I guess I just take a long time.

Q: I’d like to see you kick ass one more time, so do another action film.

GD: Believe me, I would love to.

Q: What’s been the best accident that’s ever happened to you and why? You met your husband in an interesting way–is that true?

GD: Oh, that’s true. That’s probably the biggest accident that happened. I met my husband because my dog bit him on the ass. I said, “Hey, who’s that? Bite him.” No.

The only reason that I met him and spoke to him was because he wanted to tell me that my dog had bit him. I left it at a friend’s house, and he was a mutual friend who walked in to say hi to his friend and there [the dog] was. She had decided to guard the house, and chased him out over the fence.

Q: Did he need stitches?

GD: No, an Irish Water Spaniel. Very sweet and soft, but she got possessive about the house.

Q: How are they now, your husband and the dog?

GD: There’s a doggish thing going on there… Yeah.