Dreamboat British actor Dominic Cooper (MAMMA MIA!, AN EDUCATION) steps up to leading man stature in THE DEVIL’S DOUBLE, a harrowing and unsettling portrait of the consequences of complete and corruptible power. The film tells the true and truly sickening story of Uday Hussein, the power-mad and sadistic son of Iraqi dictator Saddam Hussein whose personal reign of terror gave him free reign to kill, rape and maim at will. In order to protect his personal security, he forces a former classmate named Latif Yahia, who bares an uncanny resemblance to Uday, to become his public stand-in. While Latif, an honorable man, tries to refuse, he and his family are threatened with physical violence if he does not agree. In Hussein’s Iraq, a request is a command, so Latif must stomach his pride and stifle his sense of decency to do the will of the Hussein family to protect his loved ones. Among the film’s most notable features is that Cooper plays both roles, alternating between the “Black Prince” and a man of moral conscience, in a performance that may well be remembered come awards season. The film, which made its international debut at the prestigious Berlin Film Festival, opens in theaters in North America via Herrick Entertainment and Lionsgate on Friday, July 29. 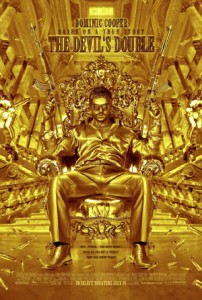 The film portrays not only the rampant sadism and butchery that formed the hallmark of the Hussein dictatorship, but also offers a behind-the-scenes look at the opulent decadence that the family indulged in while most of its citizens languished in poverty. The film parallels the over-the-top sensibility of Brian de Palma’s SCARFACE, with Cooper clearly relishing portraying the “Black Prince” as much as Al Pacino reveled in his portrayal of the Cuban crime kingpin Tony Montana. There is no sympathetic upside here…….Uday Hussein’s psychopath is a reckless, sadistic party-boy with a rabid hunger for sex and brutality. At first, Latif finds a way into the psychotic’s entourage, but nothing quite prepares him for the horror of Uday’s drug-addled life of fast cars, easy women and impulsive violence. Latif forges an intimate bond with Sarrab (played by French seductress Ludivine Sagnier), Uday’s seductive mistress who’s haunted by her own secrets. But as war looms with Kuwait and Uday’s depraved gangster regime threatens to destroy them all, Latif realizes that escape from the devil’s den will only come at the highest possible cost. Clearly, this was a regime and a system that needed toppling…..but of course, the question still remains an open one about what shape the democratically elected new leadership will take in Iraq. As a footnote to America’s involvement with Iraq, it is a fascinating look at what existed prior to the American invasion of that beleaguered country.

The film is directed by Lee Tamahori, a New Zealand director who came to fame two decades ago with his aboriginal film ONCE WERE WARRIORS. Since making his mark with that prestigious film, Tamahori followed the path of many international directors and made his way to Hollywood, where he directed the James Bond thriller DIE ANOTHER DAY and the political actioner XXX: STATE OF THE UNION. This film, steeped in psychological one-upmanship and graphic violence, marks a return to form for the director, who brings a heart-stopping authenticity to the story while never being afraid of striking a melodramatic chord when necessary. The film was written by Michael Thomas (BACKBEAT, SCANDAL) and produced by Dutch-based Staccato Entertainment in association with FIP Malta Ltd., Film Finance VI, Tulchin Entertainment and Foreign Media. To learn more, visit: http://www.thedevilsdoublefilm.com/index2.html