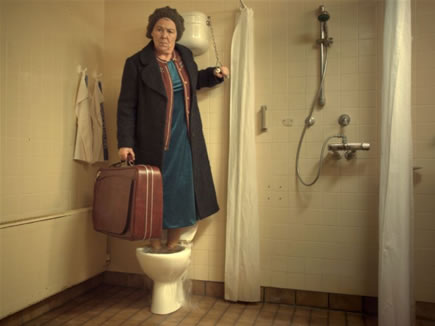 When a filmmaker draws on his own experience to the extent that Icelandic director Fridrik Thor Fridriksson has done in his wonderful memory film MAMMA GOGO, the intimacy of the revelations is almost disarmingly intimate. The prolific director, probably the best known from his native country and one of the most consistent in Scandinavia cinema, takes his audience on a personal journey as the film’s protagonist, a filmmaker himself, becomes immersed in the downward spiral of his mother due to Alzheimer’s disease.

The film, which premiered at the Toronto International Film Festival this past week, is not the only one to deal with human frailty, but it distinguished by its director’s canny mix of tragedy and satire, as his mother’s descent is paralleled by the economic meltdown that has put Iceland in the news over the past few years. “When this illness began showing up in my mother’s behavior, I noticed that all the politicians and the bankers who caused the economic mess, were suffering from a very similar illness”, Fridriksson commented at a one-on-one interview in the outdoor café of the Intercontinental Hotel. “They all lost touch with common sense and did not fully understand what they were doing.”

Fridriksson shared that he was guilty of some of the excesses portrayed in the film by the thinly autobiographical film director character. “Like everyone else, I started wildly investing in the stock market and making crazy risks”, he offered. “But I have become used to taking risks working as a filmmaker and I guess I just got caught up the madness that was happening at the time, where we thought things would just continue to go up, up and up.” As we know, Iceland’s fragile economy was amongst the worst hit in Europe. The country’s bankers wildly speculated with cash from foreign investors, piling up debt that far exceeded the island’s GDP. The film industry, always rather intimate by other European country standards, was one of the hardest hit by the crash.

The government in Reykjavik has slashed the state film subsidies, upon which all local filmmakers are dependent, by nearly a third, effectively reducing the country’s already modest output of six or seven films annually to no more than two or three. “It was never easy to finance a film in Iceland”, Fridrikssonexplained. “We always have needed strong co-production partners, particularly with Germany and Scandinavia, and as the economic crisis has hit them almost as hard, it has made producing films almost impossible.”

Fridriksson, who is an acknowledged film veteran who has recently been lauded with Career Achievement Awards at film festivals in the Czech Republic and other locales, remains an exception because of the track record of some of his earlier films such as CHILDREN OF NATURE (1992), which was nominated for an Oscar, and COLD FEVER (1995), an international arthouse hit. The director has also won the Amanda Award (the Norwegian Oscar) twice for MOVIE DAYS(1994) and DEVIL’S ISLAND (1996), as well as Best Director prizes at such festivals as Edinburgh, Festroia, Karlovy Vary and Santa Barbara. “It is particularly hard now for young filmmakers who don’t have this kind of recognition”, Fridriksson offered. “I realize I am very lucky that I can continue to find investors around the world for my projects.”

MAMMA GOGO is co-produced with Germany and is being sold internationally by Munich-based powerhouse Bavaria Film International. However, the director’s economic and psychological situation is reflected in the film’s story, as an Icelandic director facing economic ruin pins all his hopes that his film, a local box office flop, will get an Oscar nomination and recoup its monies overseas. His travails are only compounded as his once-proud mother begins to deteriorate mentally and needs to be forcibly institutionalized. “It was a hard time for me and my family”, Fridriksson shared about the past few years until his mother’s recent death. “In a way, I felt that the whole society was becoming undone by its own mental crisis, and that the confidence and belief in the future that we have always had has been replaced with a feeling of powerlessness, anger and lack of engagement in the political process.”

The malaise is only now beginning to lift after almost three years of negative worldwide press and the pull-out of investment in the country by foreign banks and industries. “I believe that the Icelandic Film Fund will be back to its previous level in the next year or two, and that will be good news for me and other Icelandic filmmakers”, Fridriksson predicted. “Our film industry has been one of our most effective exports and people in power are beginning to see that an investment in film has high returns in terms of the country’s image and prestige.”

Fridriksson’s fellow Icelandic filmmakers are needing to get creative in the ways that they finance their films. Two new low-budget efforts, CITY SLATE byOlaf de Felur Johannnesson and RISING MOON from Lydur Anason, secured backing from private investors, including online fundraising efforts that are very new to Iceland. Premiering at the Locarno Film Festival last month, KING’S ROAD, a dysfunctional family drama (is there anything else?) directed by editor-turned-director Valdis Oskarsdottir saw its producer, director, editor and most of the crew take a major cut in per diems. The film, which is being sold in Toronto by German sales company Beta Film, mines the current financial crisist for laughs as well, including its setting in a run-down trailer park. The economic recession may have taken its toll financially, but creatively it seems a topic that is ripe for directorial invention. For more information on new Icelandic films, visit: www.icelandicfilmcentre.is