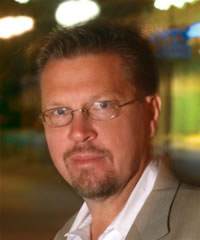 May 26, 2009 – Veteran film festival director, filmmaker and actor Jody Kielbasa has joined the University of Virginia’s College and Graduate School of Arts & Sciences as the new director of the Virginia Film Festival.

He took up the post on May 11, succeeding Richard Herskowitz, who stepped down in November after 15 years as artistic director.

The Virginia Film Festival is a four-day fall event known for its themes that blend entertainment and education.

“We’re thrilled to have Jody on board in this capacity,” said Arts & Sciences associate dean Bruce Holsinger, who chaired the search committee. “The Film Festival plays a significant role in the College’s arts community, and Jody Kielbasa is the ideal leader at this exciting time for arts at U.Va. more broadly.”

Kielbasa comes to the University from Sarasota, Fla., where for the last decade he served as the founding executive director of the Sarasota Film Festival. Under his leadership, that festival became one of the top regional film festivals in the United States with more than 45,000 attendees in 2008. It grew from a three-day mini-festival to a 10-day event, attracting celebrated film artists such as Richard Dreyfuss, Robert Altman, Alan Alda, Gena Rowlands, Rod Steiger, Edward Norton, Charlize Theron, Liv Ullmann, Stanley Tucci, Jon Voight, Norman Jewison, William H. Macy, Billy Crystal, Woody Harrelson, Peter Falk, Werner Herzog, Sydney Pollack and others.

“I am truly excited about the opportunity that lies ahead with the Virginia Film Festival and believe that the University of Virginia provides a unique platform for discussion and dialogue about film while offering tremendous resources through the faculty, students and community to further that dialogue,” Kielbasa said. “I look forward to moving to Charlottesville with my family and becoming a part of this special community.”

Kielbasa founded the award-winning Tamarind Theatre, where he produced more than 100 plays.

Prior to taking the post at Sarasota, Kielbasa was the producing artistic director of the American Stage Theatre in St. Petersburg, Fla.

“I wholeheartedly welcome Jody Kielbasa to Charlottesville and to one of the most unique and innovative film festivals in the country,” said Mark Johnson, chairman of the Virginia Film Festival advisory board and producer of numerous Hollywood movies including “The Chronicles of Narnia” and “Rain Man.” “Jody’s experience as the director of the large and complicated Sarasota Film Festival and his passion for film, both the classic and the cutting edge, make him the ideal person to take over the reins of the Virginia Film Festival and not only to embrace what our festival has stood for but also to challenge it in directions that we have not yet dared to take.”

For more than 20 years, the Virginia Film Festival has brought together films in a program that resembles a huge comprehensive course on a cultural theme, which illuminates the social and artistic impact of movie-making. “Funny Business” is the theme of this fall’s festival, which will take place Nov. 5-8 in Charlottesville.