Based On The Best-Selling Book SID VICIOUS: NO ONE IS INNOCENT 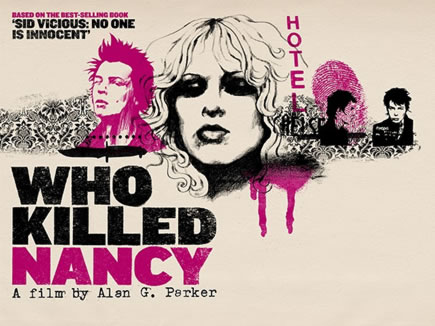 WHO KILLED NANCY, a new documentary by Alan G. Parker looking into the demise of Nancy Spungen – was it her boyfriend, punk icon Sid Vicious; was it Nancy herself; or was it one of the unsavory junkie/dealers in and out of their room that night of October 12, 1978,  at the Chelsea Hotel!  Based on rock author and punk expert Alan G. Parker’s best-selling book “Sid Vicious: No One Is Innocent,” the film is set to open in NY at the Cinema Village on July 30, 2010.  It will also be available on iTunes and VOD day and date.  Peace Arch Entertainment will release the film.

On October 12th, 1978, Nancy Spungen, an ex-prostitute, sometimes stripper and heroin addict, was found dead in a bathroom at the Chelsea Hotel in New York. She also happened to be the girlfriend of the Sex Pistols’ bassist Sid Vicious, who was quickly accused of her murder. Less than 6 months later, he died of a heroin overdose and the case was closed.

The death of Sid and Nancy has passed into rock legend and has only added to the controversial and notorious image of the Sex Pistols and punk music.

At the request of Sid’s mother, who committed suicide in 1996, Alan Parker has devoted himself to discovering who killed nancy, by interviewing 182 people – from former sex pistol Glen Matlock to Howie Pyro, a ‘face’ on the NYC punk scene who was present on Sid’s last night alive – and re-examining NYPD evidence, he investigates what really happened that night in room 100.

Responding to the question, “Do we finally find out just ‘who killed Nancy” in room 100 at the Chelsea Hotel, Parker responds: “I think we get as close as any human being is likely too!  We didn’t leave any stones unturned, and we discovered more new information than I personally thought we were going to.”