Filmmakers, industry mavens, film critics and local film buffs gathered last evening at the historic Backstage Productions Arts and Entertainment Complex in Kingston, NY for the awards ceremonies of the 10th edition of the Woodstock Film Festival. The film event closes today, celebrating 10 years of exceptional independent film, panels, concerts, events and parties, with the best of the best in the indie film world.

The Lee Marvin BEST FEATURE NARRATIVE AWARD was won by DON’T LET ME DROWN, directed by Cruz Angeles. DON’T LET ME DROWN tells the story of a blossoming friendship between two New York City high school students whose immigrant families must endure turmoil just after 9/11. The film was a major hit at the Sundance Film Festival and also won the Audience Prize at the San Francisco Film Festival. 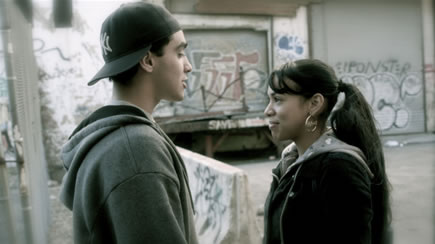 The Maverick Award for BEST FEATURE DOCUMENTARY was given to JUNIOR, directed by Jenna Rosher. JUNIOR chronicles the life of Eddie Belasco, a 75-year-old San Francisco native with a classic Italian-American upbringing who is now facing his future as a retiree.

Industry insiders and pioneers were also honored at the event. The HONORARY TRAILBLAZER AWARD was given to producer Ted Hope, who has been responsible for some of the most significant American indie films of the past few decades, including AMERICAN SPLENDOR, IN THE BEDROOM, THE ICE STORM, HAPPINESS, 21 GRAMS and ETERNAL SUNSHINE OF THE SPOTLESS MIND. The Award was presented by Geoff Gilmore, chief creative officer at Tribeca Enterprises.

The HONORARY MAVERICK AWARD was given to writer/director Richard Linklater by his longtime colleague, collaborator and friend, actor/director Ethan Hawke. Linklater has been a major force in American indie film since his astonishing debut SLACKER in 1991. Since then, he has worked prolifically, creating such instant classics as DAZED AND CONFUSED, BEFORE SUNRISE, WAKING LIFE, SCHOOL OF ROCK, BEFORE SUNSET, A SCANNER DARKLY and FAST FOOD NATION. His most recent film ME AND ORSON WELLES screened at the Festival this weekend.Others honored at the ceremonies included Honorary Mavericks Mira Nair (THE NAMESAKE), Barbara Kopple (WOODSTOCK: NOW AND THEN), actors Woody Harrelson and Steve Buscemi, and Trailblazer recipient John Sloss.