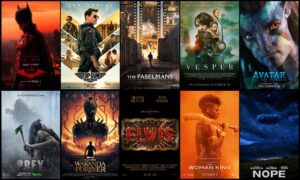 One of the most interesting things about 2022 is the vast wave of remakes, sequels, and reboots that have emerged. From films such as Halloween Ends and Scream 5, as well as the continuation of the Marvel Cinematic Universe into more of Phrase 4 with Thor: Love and Thunder and Dr. Strange: Multiverse of Madness, plus a slew of Disney+ shows, the era of recycled intellectual property is upon us. However, several films this year found exciting ways to bring their franchises to new heights, bringing tremendous storytelling, vivid imagery and art direction, and heartfelt tone and emotion.

While the reboot dominated 2022, there were also several films that shined bright this year as stand-alone, original feature films. These films, in many ways, will be long remembered as tremendous works of cinema. Sadly, of these films, I was not able to view Everything Everywhere all at Once in order to analyze it and/or rank it in my Top 10, despite hearing nothing but praise for its spin on the concept of the “multiverse.”

Where I have previously reviewed a film, the title is hyperlinked to that review. Where I have not, I have written a short description of the movie to help explain why I chose it.

1. The Batman (Matt Reeves): Matt Reeves delivers one of the most dense and provoking versions of Batman I have ever seen, with his Blade Runner-styled vision of Gotham and the caped crusader. The Batman takes the Dark Knight’s moody and gothic tone and brings it to new heights with dark and vicious villains, a compelling detective storyline with true and original mystery, and a fascinating chemistry between Batman and Catwoman.

2. Top Gun: Maverick (Joseph Kosinski): It is always a gamble whether a sequel will live up to the expectations and entertainment value of its predecessor. With Top Gun: Maverick, director Joseph Kosinski brings all the spectacle and thrill of the original Top Gun and layers it with magnificent storytelling and character development to perfectly balance out the breathtaking sequences of fighter-jet action.

3. The Fabelmans (Steven Spielberg): It was clear from the beginning that Steven Spielberg was going to put his heart and soul into his newest feature, bringing it back to the roots of his love for filmmaking. The Fabelmans tells Spielberg’s most intimate story, with tremendous vision and heartfelt moments, splashed with intuitive themes of anti-Semitism and unstable family dynamics.

5. Avatar: The Way of Water (James Cameron): After over a decade of anticipation, James Cameron delivers on Avatar: Way of the Water with stunning visual imagery, and an all-new cast of characters that are delightful to follow. While the film runs for a long duration and covers lots of ground, Cameron’s sequel never fails to dazzle and deliver genuine emotion and family themes.

9. The Woman King (Gina Prince-Bythewood): While it may sometimes feel like it’s going through the motions, The Woman King comes at the viewer with stunning achievements in costuming and direction, creating a heartfelt storytelling experience. Topped with intense and well-choreographed battles and sequences, this film earns itself a solid place among the best films of the year.

10. Nope (Jordan Peele): Jordan Peele may not strike gold the way he did with Get Out or Us, but make no mistake, Nope makes for a solid third installment to Peele’s cinematic collection. Filled with decent suspense and some unique, and often surprisingly grotesque, alien-creature sequences, the film succeeds in entertaining, even if its commentary is not always concise.

Adam Vaughn is a graduate of the Film & Moving Image program at Stevenson University, with a focus in Cinematography and Production. He also has a minor in Theater and Media Performance. Adam works as a freelance photographer and videographer, focusing his craft on creating compelling photographic and cinematic imagery. Adam is excited to join the Film Festival Today team and explore the world of cinema and visual arts.