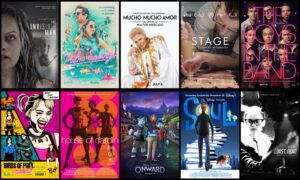 2020 has been a rousing year for how we consume media in the wake of a global pandemic. Sadly, this evolution came at a time of avoidable death tolls and poor government responses. As we examine the low points of 2020, it’s only fair that we examine the high points of 2020 that gave us genuine joy. Here are the top 10 films that helped make 2020 a positive year for me, in order of preference.