Film critics far and wide, some of the best known and many of the most obscure, are looking back and choosing a Top Ten list of favorite films of the past year. This impulse, which I would describe as “David Letterman syndrome”, is a rather boastful enterprise, with the assumption that one’s personal preferences either collide or synch up with one’s professional colleagues and the public at large. I did not do that much analysis of it…..I simply used my memory banks and came up with a list of films that have stayed with me these many months and which I think deserve further exposure and greater recognition. Truth be told, as of this writing, I have still not seen several films that have appeared on many critical lists, including HUGO, THE ADVENTURES OF TIN TIN, TINKER TAILOR SOLDIER SPY, CARNAGE, MARGARET, MYSTERIES OF LISBON, POETRY and WAR HORSE. However, as a veteran of the scene for the past 25 years and as someone who attends a multitude of film festivals and special screenings, I guess I am as qualified as John Q. Twitter to offer this countdown. The following are the films that really pulled at my imagination and have stayed with me (given in alphabetical rather than preferential order).

While its playful gleam does run out of steam in the final chapter (awash with old fashioned visual melodrama), this film is one of the most unlikely critical and audience smashes in a long while. Shot in glorious black and white with no dialogue (but a preponderance of memorable music), this is a heartfelt ode to the power of film to transcend everyday life and the language of cinema that is shared worldwide without the restrictions of local language and culture. One of the more subtle pleasures of the film is that it does not attempt to mimic silent cinema technique but finds a kind of hybrid style that mixes together the sublime “we had faces then” styling of silent cinema with the immediacy and resonance of modern cinema language. This Oscar favorite is truly one of the most audacious film projects and the courage of its writer/director is rather astonishing in these mostly conservative times.

A film this breezy could have just been a pleasurable night out at the movies but the heartfelt performances by the film’s trio and the sharp script make it one of the highlights of my viewing year. Veteran actor Christopher Plummer is getting the lion’s share of attention for his Oscar-worthy performance as a man, who late in life, decides to come out of the closet and find the truth in his life. However, Ewan McGregor (an actor who has appeared in many undistinguished films since his debut 20 years ago in such gems as TRAINSPOTTING) hits all the right neurotic notes as the son, a cartoonist who relates more to his dog than to other people. As the objection of his affection, French actress Melanie Laurent brings a world weariness and emotional hunger to her role as a movie star who longs for domesticity yet runs away from the first sign that she is achieving it. Mike Mills’ script, clever use of animation and the voice-over dialogue between McGregor and his pet terrier creates a roundness and authenticity that many lesser quirky films reach for but rarely succeed at. 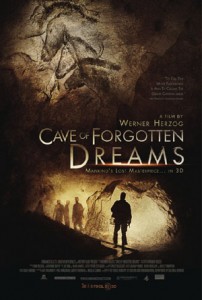 Filmmakers have the ability to take audiences on journeys that they themselves did not realize they profoundly needed. Such was the case with this remarkable documentary that takes us into the caves of southern France to discover the pre-historic drawings that create a visceral connection with the past. Not only are these discoveries revelatory (and profoundly beautiful) but the director’s enthusiasm for his subject is highly infectious and its jolts of visual pleasure are immediate and impressive. Herzog also uses 3D technology in a way that illuminates rather than deadens the viewer…..these cave paintings literally come to life and the realization that we are all part of an ongoing chain that links the first human beings to the future entities that we are morphing into is astonishing and meaningful and beautifully realized.

Working outside his native Iran for the first time, Kiaroastami has crafted an intimate gem of a film about the knowns and unknowns in the relationship between an English writer and the local French woman he befriends in an Italian village. If you are a sucker for the talk-talk-talk films of Eric Rohmer (guilty as charged), then this intriguing puzzle of a story will make an impression on you, as it did on me. The subtle acting of leads Juliette Binoche and William Shimell, the deeply conscious script of director Kiarostami and the beautiful lensing of cinematographer Giancarol Biasili make this one of subtle story of love and attraction one of the deepest and most profound films I saw this past year. 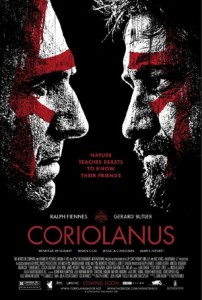 Taking on one of Shakespeare’s lesser known works, actor/director Ralph Fiennes contemporizes the action to our own troubled times and finds nuggets of truth and profound feeling in what could have been a respectable but rather dull vanity project. Not only does he make the point that Shakespeare’s views on war, peace, morality and psychological complexity are as compelling as ever, but he makes canny use of social and political undercurrents (such as the Arab Spring and the current class warfare) to make this a universal story of the triumph and cost of war. Add to that the best acting ensemble of the year, with knockout performances by Fiennes himself, Vanessa Redgrave as his controlling mother, Gerald Butler as his enigmatic arch-enemy and the prolific Jessica Chastain as his long suffering wife. This is the stuff of mythology and one only hopes that there is a public appetite for a film of such sparkling qualities.

When I first saw the film at a screening at the Toronto Film Festival, I found it fascinating but kind of cold. However, upon revisiting it this past month, I realized how much director David Cronenberg is working outside his comfort zone in his recreation of the repression and mental anguish of its characters, who are defined more by 19th century Victoriana than jazz age anarchy. Michael Fassbender, certainly the breakout actor of the year with his performances in this film and the flawed but fascinating SHAME, gives a finely tuned portrayal of psychoanalyst Carl Jung, a man both open to new ideas and blinded by his adherence to complacent bourgeois loyalties. In his third performance in a Cronenberg film, actor Viggo Mortensen further extends his considerable range, playing icon Sigmund Freud with a sparkle and shimmer that brings the iconoclast to vivid life. In this sense, Keira Knightley as the woman who comes between them also commits to an alarming degree with her animalistic performance as a woman released from repression. I still have my quibbles with the film, but it sticks with me as a remarkable plunge into a distant time and a fascinating study of professional competition and sexual repression. 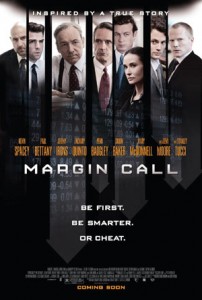 This is really the one that got away….a superb film that has only made a limited impact because it was passed over by some of the industry’s biggest distribution players. Astonishing as a first film, the story is about as zeitgeist as it gets…..the inside view of a Wall Street trading giant about to implode from its dangerous and reckless handling of other people’s money. Not only does it provides a necessary missing link to the Great Recession that we are still trying to shake off, but its superb ensemble cast (led by Jeremy Irons, Kevin Spacey, Paul Bettany, Simon Baker, Stanley Tucci, Zachary Quinto and Demi Moore) does some of the best work they have ever done on the big screen. This is a film that not only illuminates but instructs, and in the process gives us a less than handsome portrait of the hubris of modern life where short term goals outbid long term vision. One only hopes that the Oscars recognize this singular achievement (although film critics groups have mostly snubbed it so far) and that this is one of those films that generate a strong DVD following after it has left the theatrical stage.

Telling his story of two couples in contemporary Teheran in a simple and direct manner, this film carries a devastating wallop that lurks beneath the surface of a story of marital discord and societal upheaval. The quartet of leads finds the truth and humanity in their characters, which make them individuals rather than simply characterizations. One wonders if the emotional impact would have been as great if the film was set in contemporary New York or Paris or Sydney…..it is the exoticism of Iran, a country mostly feared and misunderstood by the general public, which adds immeasurably to the depth of the piece and its highly original representation. As a rosetta stone for understanding the conflicts aflame in the Moslem world, the clash between traditional values and universal understandings, literally between the past and the present, this is one of the most emotionally devastating and satisfying films I’ve seen in years. 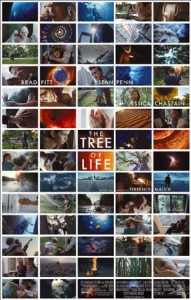 THE TREE OF LIFE (Terrence Malick)

I will not pretend that I totally understand all the subtleties and connective tissue of this extraordinarily meditative work, but I know that after viewing it that something inside had changed. This is one of the rare films that actively engaged in philosophical questions and spiritual longings, inviting the audience to create its own impressions and learn its own lessons. It is a daring, difficult and ultimately satisfying meditation on the purpose and how memory leads us to revelation and some kind of grace. This is one film that must be seen over and over again to glean its subtleties and mine its messages.

Whoever said that good things come in small packages must have had this intimate film in mind. Writer/director Andrew Haigh presents us with a so-simple story about two gay men who meet, have erotic sex and then take the time to explore who they are together and separately. The dialogue between them not only smacks of realism but has a potent poetic force that illuminates their individual needs, fears and hopes. The camera comes in so close that it feels that is intruding on these peoples’ private lives (which, of course, it is) and that we become voyeuristic witnesses to the unknowable signs of attraction and disassociation. This is, in the best sense of the word, a journey film, one that does not stray far from the apartment of one of the men, but which travels huge distances in their emotional landscapes. The opening ended ending (will they come together or drift apart) and the conviction of the actors, who mainly improvised the script, made this one of the tour de forces of the year for me…..a film that spoke volumes about the human experience and heralded the arrival of an astonishing new film talent.