Although his legacy was not specifically in the film or entertainment arena, Steve Jobs, who passed away last week at the age of 56, was a prime force in introducing and popularizing technologies that have changed the way that the world watches a film or listens to music. In this sense, the entertainment world has lost a champion, a visionary and a risk taker.

One of this century’s most revered personalities and the longtime chairman and most recognizable face of Apple, Jobs lost his battle with pancreatic cancer and his loss is being mourned all around the globe. He made an unprecedented impact on the world’s consumer electronics markets with a string of successful products, including the iPod media player, iPhone smartphone and iPad tablet computer. In little more than a decade, he took Apple – the company he co-founded in 1976, and returned to in 1997 – from near-bankruptcy to being the world’s second most valuable company, after the oil giant Exxon. The iPod, iPhone and iPad were all relatively late to market, expensive, and, in their initial versions, lacked important features. But Apple’s products not only came to dominate their rivals, they redefined large areas of three entire industries: music, mobile telephony and personal computing. Through his animation studio, Pixar, and films such as TOY STORY (1995), he also helped change the movie industry. Few entrepreneurs have had as much impact.

Nothing in the first 45 years of Jobs’s life suggested that he would have such an impact. Born in San Francisco, the child of two graduate students, he was adopted, and named, by Paul and Clara Jobs. He grew up in Mountain View, close to the heart of Silicon Valley. While at Homestead high school, Cupertino, he went to extracurricular lectures at Hewlett-Packard – the Valley’s founding technology company – in nearby Palo Alto, and he and eventual Apple partner Steven Wozniak got summer jobs there. After finishing high school in 1972, Jobs moved north to study at Reed, an expensive liberal arts college in Portland, Oregon. He dropped out after one term. He grew his hair and a beard, slept on friends’ floors, and sometimes went to a Hare Krishna temple for free meals. Like many drop-outs, his ambition was to visit a guru in India, which he eventually did with a friend. This began for him a lifelong immersion in Buddhism and Eastern philosophy, a fact that has not been widely reported in the media, but which obviously served as an inspiration for his success and his brave final acceptance of his death. 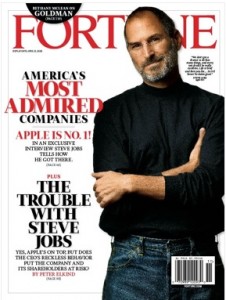 Jobs found himself involved in the very beginnings of the personal computing business, and eventually established ,with Wozniak, Apple Computer, which produced a highly inventive personal computing device with easily accessible expansion slots that could be adapted for almost any purpose. Its built-in color graphics and ability to plug into a TV set were marked advantages over its rivals. The company was a great success, dominating the US market until the IBM PC was launched in August 1981. The Apple II’s success also enabled Apple Computer to go public in December 1980. Its share price more than doubled on the opening day, valuing the young company at $1.8bn. The Mac was launched with one of the most famous TV commercials in history, titled 1984, and given a single showing during the Super Bowl of January that year. Bill Gates, chairman of Microsoft, appeared on stage with Jobs at the Mac’s launch, praising the machine and promising Microsoft’s software support. However, the company began to decline in 1985 during a financial recession and Apple was forced to close half of its six factories and let go of nearly 25% of its staff. Jobs lost a boardroom battle and was out until he returned in 1996. Turning Apple around was not easy, even for Jobs. More than a dozen Mac models were replaced by the teardrop-shaped iMac, followed by the portable iBook. Jobs sensed that he needed to take things in a bold new direction, so in October 2001 he launched the iPod, which was a phenomenal success, followed by the creation of the iTunes music store in April 2003 which continues to change the revenue stream for what had been a declining music industry. When Jobs followed up with the iPhone and iPad, he saw annual sales soar to $65bn in 2010.

Apple’s decade of growth may be considered even more remarkable in the light of Jobs’s health problems. In 2004 he had an operation for a pancreatic tumor, a relatively rare form of cancer. The following year, he talked about death in an inspiring speech at Stanford University: “Remembering that I’ll be dead soon is the most important tool I’ve ever encountered to help me make the big choices in life. Because almost everything – all external expectations, all pride, all fear of embarrassment or failure – these things just fall away in the face of death, leaving only what is truly important. Remembering that you are going to die is the best way I know to avoid the trap of thinking you have something to lose. You are already naked. There is no reason not to follow your heart.” In January 2009 Jobs took a six-month medical leave of absence, during which time he had a liver transplant, before returning to work. In January 2011, he took another medical leave of absence before stepping down in August as Apple’s CEO.

Jobs was a quintessential Silicon Valley hero, who built one of the world’s richest and most successful corporations against all the odds, using his own taste, talents and willpower. He was, of course, in the right place at the right time – the start of the personal computer industry – and he was well placed to catch the wave as analogue industries changed from vinyl, tapes, film, paper and other physical formats to digital ones. But Jobs was unique in his ability to ride that wave, and shape it in ways that no rival could emulate.