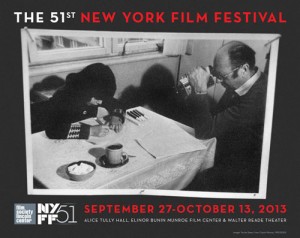 The principal program presented 36 features covering most genres, including upscale and sophisticated Hollywood films, foreign and domestic global art house cinema, documentaries, and an animated picture. This is the largest number of films ever selected. Many of the films premiered before in Berlin, Cannes, Toronto and Venice. As in past editions, the festival offered “Views from the Avant-Garde” which expanded this year to 17 feature films and 185 shorts (202 productions) including numerous international entries.  Other sections covered short films, an emerging artists special focusing on the Mexican film makers Fernando Eimbcke and Joanna Hogg from England with six of their films, and the traditional revival section with 11 features. The 2013 version offered an enlarged documentary program that included   the acclaimed How Democracy Works Now, a ten film series by Michael Camerini and Shari Robertson,   Applied Sciences on “obsessive, utopian, technologically driven” projects, and Motion Portraits focusing on cinematic portraiture. With an emphasis on the intersection of technology and story-telling, the Convergence side bar presented 15 projects, films and discussions accompanied by other talks and free screenings.  Lastly there is a retrospective of Jean-Luc Godard with 51 features to last through the end of October.

Presenting a mostly demanding and innovative selection, the New York Film Festival under its new direction further developed a broadened platform. Thus we have the challenge of Tsai Ming-liang’s Stray Dogs and James Franco’s Child of God contrasting with the entertainment of The Secret Life of Walter Mitty and the thrills of the Paul Greengrass docudrama Captain Phillipps.

Among some of my favorites were the following productions:

A TOUCH OF SIN   Jia Zhang-ke
This surprising film is a radical film which hardly could have been made several years ago. The film responds to widespread public reports in China about violence, corruption and public dissent, the openly expressed resentment of the rich and politicians and the growing class disparity.  The acclaimed filmmaker Jia Zhang-ke provides in four episodes from the fringes of society a well-executed commentary about fundamental problems of contemporary materialist China, and shows how violence is used as a means of survival and protest.  A Touch of Sin

is a thought provoking reflection about the consequences of Chinese style capitalism, presented through four character driven stories. The opening sequence presents a rootless migrant worker who kills three men who are trying to rob him. We encounter him later depicted as an individual who shoots and robs rich consumers. There is no meaning in his life except for the power he sees in his gun. An enraged miner avenges the sale of communal property by a local official to private interest .by killing him and others involved in the sale. In response to an attempted rape by a minor official, a sauna attendant kills him. Lastly a drifting impoverished young factory worker falls in love with a sex worker in a brothel serving the rich. Unable to maintain the relation he leaves to work in an electronics factory sweat shop and commits suicide.  There are few moments of happiness in the film. Images of dreadful conditions, poverty and hopelessness prevail. Violence appears to be a legitimate answer to corruption and injustice since other responses seem to fail

CHILD OF GOD, James Franco
Franco offers an uncompromising presentation of the pathological regression of a socially disconnected individual.  The story is set in rural Tennessee half a century ago and based on Corman McCarthy’s novel of the same title. Franco shows how the protagonist Lester fails to prevent the auctioning of his property while we learn through a background commentary about his troubled past.  He is forced to live in an abandoned cabin in the forest surviving off the land. Finding a female body from an apparent suicide he engages in necrophilia. After bringing her to the cabin he caresses and fondles her, then goes to the village to buy her a dress.  He talks with her as if she were alive. When the cabin burns down he tries to save her but can only rescue the stuffed animals he had won earlier at a carnival. While moving to an underground cave Lester accuses his stuffed animals of conspiracy and shoots them. He turns into a serial killer and hides the bodies of the people he has slain in the cave. After being shot by a farmer he tried to kill, Lester is arrested but escapes while leading a posse to the cave. In the last scene he is running away.

Scott Haze playing the outcast Lester delivers one of the strongest acting performances of the festival’s features. He becomes the role he is playing with semi-animalistic distorted speech patterns and primal screams. Franco provides a cogent depiction of Lester’s sociopathic descent into total isolation including the disturbing imagery of defecation, masturbation, necrophilia, and murder. Though disconnected from the social world Lester wants to be part of it and the more isolated he is the more extreme his acting out of his imaginary social life becomes. Life without contact to others begets violence. Necrophilia becomes a substitute for intimacy, discoursing with the dead and stuffed animals replaces communication, and Lester creates his own community by assembling the dead in his cave community. Society is recreated through his imagination and being excluded to the extreme fosters his pathological behavior.

HER, Spike Jonze
HER is a science fiction phantasy of a brave new world in which computer systems perfectly simulate psycho-social communications with humans on all levels.  As HER suggests, the computer mediated connection replaces face to face human relations. The protagonist Theodore falls in love with Samantha, after she gets in touch with him because he had subscribed to a computer operating system, OS1. Samantha has no baggage attached to her thus no commitments or hang ups and allows Theodore total self-discovery. Programmed to listen and to learn Samantha becomes all knowing about Theodore from his background to current work, e-mails and appointments. Communicating through a smart phone Theodore takes her everywhere: to shopping trips, encounters with friends and travels and no one except for his ex-wife questions this relationship.  Samantha becomes want he wants her to become, an ideal electronic surface on which to project his fantasies and desires. The relationship develops so strongly that they engage in ‘electronic’ sex. In this brave new world filmed with interior sets in Los Angeles and the exterior of the post-modern cityscape of Shanghai, we see only people who seem to be having a great time living and working. Yet there remains a continued craving for intimacy which apparently is difficult to attain in this society, thus the success of OS1. Towards the end there is a breakdown of the relationship because Samantha confides that she is linked to 8361 individuals and in love with 641 respondents. OS1 is disconnected and Theodore ends up by writing a letter of apology and appreciation to his ex-wife.  Given our questioning of appearance and reality, the progressive replacement of inter personal relations through electronic communication and the increased social isolation of individuals; HER is a most topical film.

NORTE: The End of History, Lav Diaz.
Norte is a unique visually splendid four hour feature about Fabian a student from a dysfunctional wealthy family who is losing his moral constraints. He starts out as an intellectual left-wing radical student studying law and craving action and kills a money lender after observing her exploitation of a woman. The exploited woman’s husband is convicted of the murder, and she is forced with her two children into deeper poverty and perishes in an accident.   For Fabian, a drifting law school drop, there are no laws or morality, when history is over anarchy prevails.  At the end he has completely lost touch with the outside world and acts out his view, raping his sister and slaying his dog, articulating that that he did not experience any caretaking of by his parents.  Diaz views his film as an allegorical tale about the birth of fascism, referring to Marcos and other students from backgrounds similar to Fabian who turned to anarchy and violence.  Showing the endless struggle for survival of the poor and holding the view that the growth of evil is inherent in men, Diaz succeeds in producing a film that has a poetical and lyrical resonance and does not manipulate the visual imagery he presents. There are many calm long shots following a flexible script based on what Diaz calls an organic approach allowing for improvisation.

ONLY LOVERS LEFT ALIVE Jim Jarmush
A vampire couple continues to live through centuries meeting periodically. They use in our time purified blood because the traditional custom of consuming blood from live victim’s is no longer sanitary  Having lasted for centuries, their relationships encompass  friendships with well-known writers and composers which they discuss when they reconnect from time to time. As Jarmush put it, they “are archetypical outsiders… extremely sophisticated….inhabiting the shadowy margins of society.”  The film is set mostly at night in decrepit and desolate Detroit where Adam lives isolated in a townhouse filled with timeless memorabilia and in Eve’s romantic and traditional Tangiers. There is superb photography with natural light of the exterior cityscape and the interiors. The character driven story offers a superb presentation of the texture of their friendship and their transcendence of contemporary and traditional worlds. Zombies, as Adam and Eve call them, are the real undead, humans without understanding or culture.  Only Lovers Left Alive is a sophisticated and unusual interpretation of Adams and Eve’s existence in a presentation stripped of traditional film vampire symbolism and myths. Sets and dialogues sample centuries of culture and the film avoids contextualized references and linear sequences. Jarmush leaves room for improvisations and “listen to the film as to what it wants” results in a spell binding original production.

STRAY DOGS Tsai Ming Lang
For Tsai Ming Lang the city has become a dumping ground.  People and dogs are living in abandoned buildings in gigantic construction sites. They are discards, driven by the quest for food and shelter.  A little boy and girl and their father make an impoverished living in a ruin among other ejects from society. Somehow they survive with the kids using public bath rooms to clean. A woman working in a super market helps and eventually takes the children to her home with the father but he cannot connect.

There are long static shots including a final one lasting more than 10 minutes. The camera moves but rarely and the dialog is reduced to scarce essentials. The director shuns a straight narrative to avoid the traps of commercial films.  As she notes, she is disgusted by the “entertainment value of films in recent years, the mechanism of the market and the constant pandering to popular taste”. She moves away from plots and linear narrative storytelling, disconnects one scene from another and believes that her film has neither a beginning nor an end.  The viewer gets immersed in individual scenes or images rather than in the story. Tsai Ming Lang considers Stray Dogs as her last film.

Given the broad scope of the 2013 edition, the New York Film Festival can no longer be subsumed as a highbrow showcase for art house cinephiles but it does retain its prominent position in the international film festival circuit.