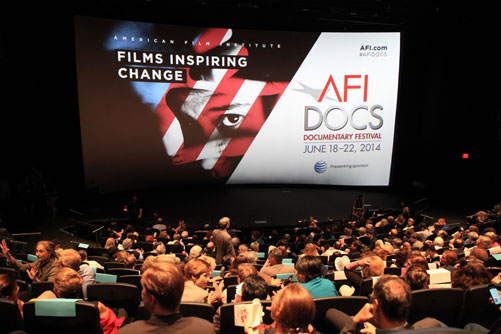 Washington, DC, June 23, 2014 – AFI DOCS announced today its distinguished Audience Award winners, culminating a five day celebration of documentaries in the Washington, DC area. This year’s Audience Award for Best Feature went to AN HONEST LIAR directed by Justin Weinstein and Tyler Measom. The film tells the story of James “The Amazing” Randi, who has been mastering the art of illusion and sleight of hand for over half a century. To him, the craft of professional deception is meant to entertain and thrill audiences who understand they are seeing sophisticated trickery. When he sees magicians’ tricks of the trade being used by con artists like faith healers and psychics to bilk the masses, however, Randi dedicates himself to exposing the frauds for what they are.

This year’s Audience Award for Best Short went to BEYOND RECOGNITION: THE INCREDIBLE STORY OF A FACE TRANSPLANT, directed by Sam Thonis, which follows a woman undergoing a highly experimental face transplant after a brutal attack left her with devastating chemical burns all over her body. Receiving the visage of an anonymous donor whose life was cut short, she has a profound experience when she meets the daughter of the woman who gave her a second chance at life.

“Congratulations to AN HONEST LIAR and BEYOND RECOGNITION for winning over audiences with their remarkable stories,” said Christine O’Malley, Festival Director. “We would like to thank all of the filmmakers who traveled from far and wide for making this year’s AFI DOCS an extraordinary one.”

AT&T is the presenting sponsor of AFI DOCS 2014. American Airlines is the official airline of AFI and a proud sponsor of the festival. The Washington Post is proud to be a major media sponsor. Additional major sponsors include ABC News, Center for Public Broadcasting, Stephanie and Hunter Hunt and Stella Artois.

About AT&T Inc.
AT&T Inc. (NYSE:T) is a premier communications holding company and one of the most honored companies in the world. Its subsidiaries and affiliates – AT&T operating companies – are the providers of AT&T services in the United States and internationally. With a powerful array of network resources that includes the nation’s most reliable 4G LTE network, AT&T is a leading provider of wireless, Wi-Fi, high speed Internet, voice and cloud-based services. A leader in mobile Internet, AT&T also offers the best wireless coverage worldwide of any U.S. carrier, offering the most wireless phones that work in the most countries. It also offers advanced TV service with the AT&T U-verse® brand. The company’s suite of IP-based business communications services is one of the most advanced in the world. Additional information about AT&T Inc. and the products and services provided by AT&T subsidiaries and affiliates is available at http://www.att.com/aboutus or follow our news on Twitter at @ATT, on Facebook at http://www.facebook.com/att and YouTube at http://www.youtube.com/att. © 2014 AT&T Intellectual Property. All rights reserved. AT&T, the AT&T logo and all other marks contained herein are trademarks of AT&T Intellectual Property and/or AT&T affiliated companies. All other marks contained herein are the property of their respective owners. Reliability claim based on data transfer completion rates on nationwide 4G LTE networks. 4G LTE availability varies.

About AFI DOCS
AFI DOCS is the American Film Institute’s annual documentary festival in the Washington, DC, area. Presenting the year’s best documentaries, AFI DOCS is the only festival in the U.S. dedicated to screenings and events that connect audiences, filmmakers and policy leaders in the seat of our nation’s government. The AFI DOCS advisory board includes Ken Burns, Davis Guggenheim, Chris Hegedus, Werner Herzog, Barbara Kopple, Spike Lee, Albert Maysles, Errol Morris, D A Pennebaker and Frederick Wiseman. Now in its 12th year, the festival will be held June 18-22, 2014, in landmark Washington, DC, venues and the historic AFI Silver Theatre in Silver Spring, MD. Visit AFI.com/AFIDOCS and connect on twitter.com/AFIDOCS, facebook.com/AFIDOCS and youtube.com/AFI.

About the American Film Institute
The American Film Institute, founded in the White House Rose Garden in 1965, is an educational arts organization committed to excellence in film. AFI is America’s promise to preserve the history of the motion picture, to honor the artists and their work and to educate the next generation of storytellers. AFI programs include the AFI Catalog of Feature Films and AFI Archive, which preserve film heritage for future generations; the AFI Life Achievement Award – the highest honor for a career in film – now in its 42nd year; AFI Awards, honoring the most outstanding motion pictures and television programs of the year; AFI’s 100 Years…100 Movies television events and movie reference lists; year-round exhibition through AFI Fest presented by Audi, AFI Docs and the AFI Silver Theatre; and educating the next generation of storytellers at the world renowned AFI Conservatory. For more information about AFI, visit AFI.com or connect with AFI at facebook.com/AmericanFilmInstitute, twitter.com/AmericanFilm and youtube.com/AFI.