The Iranian film NADER AND SIMIN, A SEPARATION (terrible title, that) was the big winner at the 61st edition of the Berlinale, winning the Golden Bear as Best Film and Best Actor and Best Actress Silver Bears for its ensemble cast of men and women. The film, directed by Asghar Farhadi, who won a Silver Bear as Best Dierctor in 2009 for DARBAREYE, will certainly be one of the most talked about international films of the year. With the current attention of the world on the emerging democracy movements in the Middle East and Northern Africa, the win by an Iranian director could not be more topical. 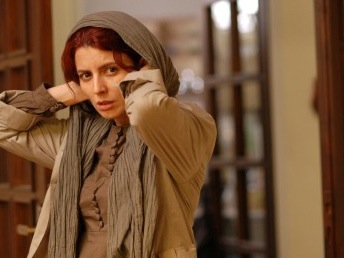 The film looks at the current social norms in contemporary Iran and the continued difficulties of women to assert their rights as equals. Simin wants to leave Iran with her husband Nader and their daughter Termeh. She has already made all the necessary arrangements, however her husband is having second thoughts, worried about leaving behind his father who is suffering from alzeheimer’s disease. For this and other reasons, he decides to call off the trip.

As a result of Nader’s decision, Simin decides to  sue for divorce at the family court. When her request is rejected, she refuses to return home, insteading moving into her parents’ home. Her daughter decides to stay with the father, hoping that her mother will soon come back to live with them.

Nader is unused to playing the role as a single parent, so he hires a young woman to look after his father. Razieh is pregnant and has accepted the job without her husband’s knowledge. When she leaves the father alone, Nader returns home to tragic consequences that not only shatter his life but also alter the image his daughter has of her father. In the meantime, both the men and the women find it hard to define new roles for themselves in a country increasingly drifting towards autocratic religious orthodoxy.

While the story told in the film is an intimate one that could be viewed as strictly a one family drama, it is emblematic of the shifting roles for men and women in a society that is also on the move. The women are highly educated but have few options to exercise their intellectual knowledge in a society that tries to keep them in their place. The men confront taking on roles as caretakers for which they are emotionally unsuited for. As the characters confront the contradictions of their lives, the film has much to say about the shifting values of societies in a precarious and forever changing Iran.

The director was born in Isfahan in 1972 and began making 8mm and 16mm films in his teens. He studied film directing at Tehran University until 1998, during which time he worked in student theater as a playwright and director and also wrote radio plays and television programs. In 2001, his screenplay ERTEFAE PAST came to the screen with director Ebrahim Hatamikia. In 2003, he made his own directorial debut with the successful film RAGS DAR GHOBAR. In 2009, he received the Silver Bear for his direction of DARBAREYE ELLY. The film is being sold by French sales company Memento Films, which should be deluged by phone calls and emails following the film’s triple threat win in Berlin this weekend.