It is rare that a rather low budget American indie title ever is included in the main Competition section here at the Berlinale (American indies are more represented in the Panorama and Forum sidebar sections). However, when a film artist has such a clear, individual voice as Miranda July, the main festival programmers cannot resist. Such is the case with July’s sophomore effort following her celebrated debut ME AND YOU AND EVERYONE WE KNOW in 2004. It has taken almost seven years for her follow-up effort THE FUTURE to hit the big screen, but the wait is definitely worth it. In fact, in a highly unusual move, the Berlinale was so interested in the film that they conveniently allowed it to have its world premiere at last month’s Sundance Film Festival, so they could have the international premiere here this evening. 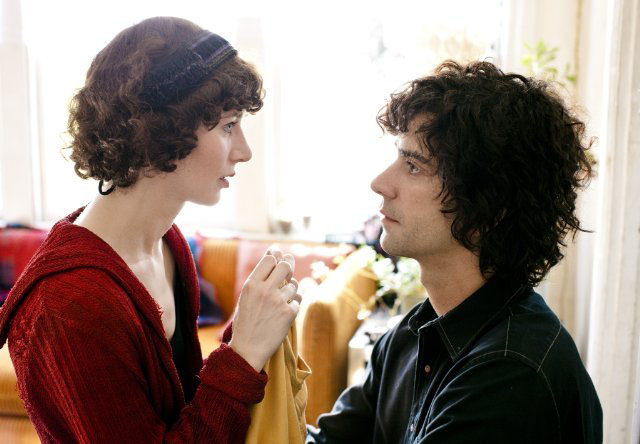 What makes Miranda July rather different from most indie filmmakers is that she is, first and foremost, a performance artist. Her art career preceded her filmic one, and the sensibilities she learned from doing performance art in museums and galleries works her in good stead in this observational comedy drama. Alternating between moods both dark and darling, the film about a couple was allegedly inspired by a serious break-up in the artist’s real life.

In THE FUTURE, July has mounted a surrealist fable about the delicate balance between relationships and the inner monologue inside each lover, with its incessant demands and individual needs. July plays Sophie, a 35 year old bohemian living with her boyfriend Jason played by real life boyfriend Hamish Linklater, in a tiny apartment. She calls herself a dancer but her movements are decidedly uncoordinated and she mainly just mopes around her apartment watching Facebook videos. When the couple find an injured cat, turn it in to the pound and then adopt it once it’s healed, this simple act of commitment precipitates a crisis in their rootless lives.

Sophie’s journey becomes dark and emotionally complex. She blithely falls into a relationship with a rather conservative father living in the boring suburbs of Los Angeles, a world quite far away from the bohemian purgatory which she and her friends inhabit. She suddently finds herself in a world of materialist values that she has always rejected, to see if a more boring life might have more meaning and resonance than the one that she has had with her boyfriend. When she finally decides to return to her bohemian soul mate, he has already moved on and there is nothing left to salvage. Decisions, the film strongly states, have their consequences.

Appearing to be improvised, the film is actually tightly scripted. In the sharp scenario that mines the humor in deadpan comedy, July shows a flair for human eccentricity and magical realism. Paw Paw, the cat, narrates the film from a cage in the pound, waiting to be rescued and fantasizing about the wonderful world she will enjoy when the couple eventually retrieve her (which they ultimately do not, leading to the cat’s death by euthanasia).

July and Linklater are a perfect aging hipster couple, simultaneously right for each other and also rather suffocating in their passionless complacency. While they may appear to be soulmates who have a strong, unbroken, rather silent bond, the truth is that each has longings that take them into opposite directions. July wryly comments on the difficulty of keeping the connection in long term relationships and how individual ambitions get sidetracked by monotony and routine.

Even its rather pranksh way, this quiet film is an ambitious and extremely personal work. As American as it is (shot in Los Angeles with a lowkey cast of oriiginals), the film was actually funded by German and UK sources. Such is the state of American indies that they need to look across the oceans for economic support and audience acceptance. The film may ultimately find a larger audience in Europe than in its native land, which makes its premiere in Berlin all the more prescient. While some may squirm at the lack of a dynamic plot, this quirky slice-of-life makes for a unique and rewarding experience.