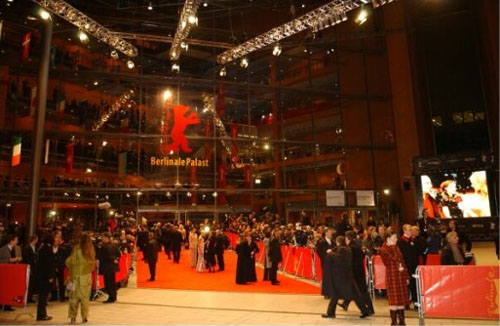 Under Kosslick the berlinale has become crucial for German productions which had been neglected under his Hollywood struck predecessor Moritz de Hadeln. This year 107 German productions are in main program,  including two in  main competition .There was a special emphasis on young film makers  which helps them get funding. In Germany film productions tend to be heavily subsidized by various public agencies covering on an average 40% of the costs

The prominence of issue oriented political cinema was present in the main competition and most sections. Their awards ranged from  two silver bears for  An Episode in the Life of an Iron Picker by Danis Tanovic depicting the  condition of a Roma family in Bosnia Herzegovina to the Peace  Film Award  for A World Not Ours by Mahdi Fleifel on growing up in a Palestinian refugee camp.  The underlying theme in many productions reflected our socio-economic crises in the everyday life and struggles of individuals

There is an overall expansion of the berlinale and its European Film Market (WEFM). The 2013 berlinale   attracted 19.630 accredited visitors from 124 countries, including 3.694 journalists, the only apparent decline due to a more rigorous accreditation process.  EFM has grown with the exhibition space.  Several months before it opened the EFM exhibition space was already booked out.  According to some indicators the 2012 EFM seems larger than the 2012 American Film Market the.  The EFM program of 816 films was featured in 1166 screenings in 40 screening facilities.  Close to 600 films were market premieres.  EFMI attracted 455 exhibitors and about 1700 buyers and 6000 other professionals   from 66 countries. Noteworthy is the larger number of big budget commercial films at the market. Though the traditional  art house  and independent cinema orientation of EFM will be maintained, there was an expansion  toward commercial fare,  Variety  called it the Big Bang trading  leaving many small titles in the cold . The Weinstein Company figured as the most prominent buyer. The Forum has also grown.  Traditionally the screening domain for the most innovative productions it has organized a larger Forum Expanded program this year.  Numerous venues outside the Potsdam Platz including a former crematorium in Wedding were used exploring the experimental intersection of film video, the arts, and visual perception.  The offerings included free-form programs, projection installation and mini exhibitions. Among the most prominent Expanded Forum participants this year was Isabella Rossellini and her Mammas performance where she commented on motherhood assuming the role of a fish and bird and of other creatures.

All together including the EFM line up 1194 productions were shown of which 404 were also programmed in different 2013 berlinale sections. More than 7000 individual titles were submitted. Additional films were selected by the festival curator and program staff. For the Panorama alone 25 advisors reviewed about 3500 productions to select 52 for the program including 29 world premieres.

Increases in virtual all berlinale sections / programs could be noted this year.  Applications to participate in the Talent Campus rose to more than 4000. New program additions included NATIVe, indigenous cinema with 24 long and short form productions as well as expansion of the retrospective to premiere in Berlinale Classics restored films. This expansion seems market driven, responding on one hand to the unending appetite for more visual entertainment and the prominence of new  internet distribution platforms such as Video on Demand.  Current film industry concerns were covered by several industry seminars updating the professional audience. A promising picture for 3D features was presented which accounted in Germany already for 22% of the box office in 2012.   Video on Demand is an option explored by most players in the field, but must be customized for each market and has not yet generated significant revenue streams, except for Netflix.  The TV mini-series seminar discussion indicates possible future expansion of film festivals into television. Prominent film makers now produce high quality  television , as noted by Michael Haneke  about the US “… once upon a time television was stupid and film superb, now  it is frequently just the opposites in the US”.  For Kosslick there is “Our   offensive for international quality television  .. such as the TV-Miniseries TOP OF THE LAKE” screened at the 2013 berlinale. Further the number of awards continued to expand to reach this year 47 bestowed by official and independent juries, the public and newspapers. Among the new comers are the TEDDY award for HIV Awareness and the Cinema fairbindet [verbindet = connected] prize established by the federal Ministry for Economic Cooperation and Development.

Among my favorites films  are AN EPISODE IN THE LIFE OF AN IRON PICKER, a feature film from Herzegovina produced for about $23 000 not using any professional actors. Instead the poor Roma family depicted reenacts their dreadful experience of being refused medical service when facing a life threatening emergency.  IT’S ALL SO QUIET is a somber beautifully imaged film by Boyed van Hoeij from the Netherlands.  Hardly any words are exchanged in this story of this single farmer in the late fifties who cares for his bed ridden father who long’s to die and scorns his son. In its depiction of emotional and communicative isolation in the dark farm house and of the protagonist’s refusal to connect to any one the film maker develops this character in an understated manner, yet we are able to relate to him easily. The Canadian film VIC+FLO SAW A BEAR  by Denis Côté  is an original presentation of the relationship  of two ex-con female lovers living secluded in a shack in a wooded area. Moving readily between dramatic and comedic elements the plot follows their desires, aspirations and fears in a starling way with sufficient tensions. The younger Flo is bi-sexual and tracked down by another revenge seeking former convict.  The superb digitally restored version of SHOAH using the state of the art K4 technology presented in the homage to its French director Claude Lanzmann was certainly one of the principle highlights of the 2013 berlinale.  This production running  over nine hours (556 minutes to be precise) uses no archival or recreated film material  is solely based on interviews with survivors, witnesses and perpetrators as well as images of the death and concentration camps as they appeared  when Lanzmann  filmed his production  in the early 80’s.  His indiredt representation, a form of oral history, clarifies questions about the holocaust as distinct from popular TV series and films about the tragedy such as SCHINDLER’S LIST by Spielberg. A superb Marcin Malaszczak   film SIENIAWKA in the Forum program did not draw enough attention. This German production is an unusual original film and comes across as a documentary depicting life for the disabled and mentally retarded men in a rundown psychiatric facility located near in a secluded village next to the German, Check and Polish borders. The film opens with disheveled men somehow surviving in the forest and closes with a long walk by a former inmate through the village which is slowly destroyed by sinking grounds due to coal mining.  Within these brackets we follow the mostly mute in mates during winter time in their closed facility, observe their bizarre behavior, and seem to be faced by the discomfort of an apocalyptic reality. With the advent of the spring the mood shifts from the black imagery and the inmate come to life. They play imaginary games, take part in a picnic and seem to communicate somehow. The only articulate inmate takes some others to a tour of the rundown facility emphasizing that the end of communism equated with the beginning of the destruction. Overall the film’s is most disconcerting with the images of decline and gloom, and its message that there is no future for the inmate outside their institution.

The 2013 edition of the berlinale certainly met my expectations because numerous productions presented the critical reflexive cinema I favor. Further the depth of the festival’s film sections, the comprehensive nature of the market with its industry seminars, the range of independent and commercial films and the cross over into the arts is an ideal combination for any observer of the current international film scene.