There is a growing number of award winning Israeli films at international film festivals frequently produced with financial backing from Europe. Foreign support, specifically from ARTE, provides more funding to Israeli films than all of the Israeli broadcasters together. Once the films have entered the United States they have a ready market since more than 60 domestic film festivals or events are devoted to Israeli and Jewish films, in addition to those featuring such film on a regular basis in their programs. They also have another advantage over other foreign language films. Unlike other foreign language productions Israeli films enjoy support from numerous U.S. based organizations encompassing funding, information centers, and film archives.

Undoubtedly, the quality of Israeli films such as BEAUFORT, WALTZ WITH BASHIR, LEBANON, LEMON TREE, THE MATCHMAKER, GOD’s NEIGHBORS, and FOOTNOTE have helped to achieve international recognition. Thus the inclusion of several Israeli films in the 2012 New York Film Festival reaffirms their standing but does not come as a surprise. These films provide divergent perspectives on Israel, posit more questions than answers, but certainly generate critical reflection about the issues and problems presented. The 1982 documentary FIELD DIARY by Amos Gitai was selected for the Masterwork side bar joined by the Oscar nominee FILL THE VOID, a feature film by Rama Burshstein and Dror Moreh’s documentary THE GATEKEEPERS in the main selection. Gitai’s film is distributed by Facets Multimedia and the other two films were picked up by Sony Pictures Classics, to enter theatrical release. These three productions are major pieces of film making. 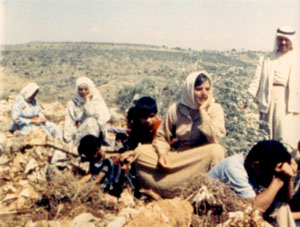 FIELD DIARY is a groundbreaking documentary which was funded by Israeli television.  It covers in 50 sequenced long takes the Israeli occupation of the Gaza Strip and the West Bank. Careful unobtrusive filming frequently from a car and interviews portray the everyday life in the occupied areas. Combined with a reflexive commentary violence against Palestinians is questioned as is the notion of the ‘good occupation’.  The Israeli authorities and most members of the armed forces from soldier to officer clearly support the occupation and created obstacles to his filming. Gitai he finished the production but it was banned by the censors and not shown, thus precluding a critical discussion of Israel’s role in the territories. The film received a negative reaction in Israel and Amos Gitai left his country Israel for France.

In THE GATE KEEPERS by Dror Moreh similar issues are addressed but from a more authoritative perspective. Using superb archival  news footage, computer animation and in depth  interviews with six former directors of Israel’s domestic secret service, Shin Beth, this documentary provides  stunning insights and case studies of Shin Beth work.  More importantly, a sobering perspective of the fundamental problem Israel faces is offered.  The viewer is challenged by the provocative and surprising interpretations from the former Shin Bet chiefs who share a solid grasp of the military and political reality of the Israel and of the Palestinian conflict. As a result of the 1967 6 day war one million Palestinians, a huge but hostile population came under Israeli control setting a new political agenda. Yet the picture of the policies enacted since is for the most disturbing.  Israel’s political leadership embraces decisions which are shaped by ideological and tactical consideration rather than a long term strategy addressing the Palestinian problem. Enlightened pragmatism is lacking and moral considerations faded into the background. There seems to be an apparent appeasement of the orthodox religious camp required for government coalitions, a camp which equates Palestinians with terrorists and supports settlements in the occupied territories with some religious groups engaged in violent acts.  The chiefs deplore that the “army has become an occupying” force.  The assassination of Prime Minister Yitzhak Rabin in 1995 changed history dramatically since the peace process was abandoned and settlements expanded.  The former Shin Bet heads do not see a serious attempt to pursue the idea of the two state solutions. When I queried Dror Moreh about possible openings, he emphasized that there is currently no effective Palestinians or Israeli leadership on the horizon and rests his hope on pressure by the United States and the International Community. As one of the chiefs, Ami Ayalon put it “We face a frustrating situation, we win every battle but lose the war”, a view already offered by four of these directors in a 2003 interview. They suggested a catastrophe for Israel unless a two state solution to the Palestinian problem is implemented.

Evidently the thematic contrast with FILL THE VOID is startling. Rama Burshstin presents in her first dramatic feature the world of the ultraorthodox Hassidic community as reflected in the story of the marriage of an 18-year old devout woman to an older widower who was the husband of her late sister. This closed setting where extended family pressure, religious law and age old norms prevail and the individual has few options, is far removed from secular or political concerns of the world surrounding it. Filmed mostly in the family’s apartment’s closed setting with few excursions to the rabbi’s office and school, FILL THE VOID is a compelling production in spite of the disconnection from secular rules of interaction. It offers an effective and sympathetic portrait of family members and their associates and a rare insight into the private realm and interactions of a Hassidic family, a realm mostly closed to the outsider. It is Israel’s official entry for the 2012 foreign language  Oscar.