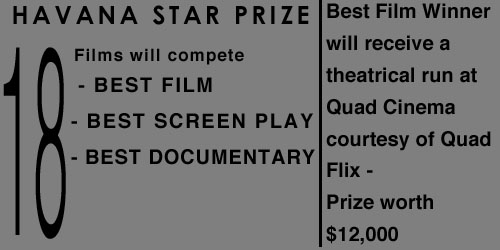 As suggested in earlier articles, in order to survive the growing festival scene in major metropolitan areas niche festivals need to have an unmistakable profile offering a program others do not have. These fests’ niche must be  successfully branded, offering more than just a marginal differentiation from other fests.  In New York the international Latino Film Festival announced its demise. As the founder Calixto Chinchilla explained the fest cannot meet the economic challenge of taking place in New York City though the former co-director Elizabeth Gardner disputes that claim.  The closure took place even though the fest has a 13 year acclaimed track record, maxed out at an audience  of  25 000 and enjoyed the corporate sponsorship of HB0. This leaves the growing New York Latino audience interested in Latin Americana films with fewer options.  As alternatives  serve the LATINBEAT program, a yearly survey offered by the Film Society of Lincoln Center which had 18 titles in its 2013 edition and  The Iberoamerican Images program of the Museum of Modern Art which presents  in May 2014 in its  fourth biannual  edition  eleven features from nine Latin American countries.

The yearly Havana Film Festival of New York, HFFNY, remains now the most comprehensive venue for an accessible over view of recent development of the Latino cinema scene.  It showcases Cuban productions as well as films from Latin American countries selected for the annual Havana Film Festival and other often award winning productions.  Founded in 2000 under the umbrella of the New York based American Friends of the Ludwig Foundation of Cuba, AFLFC, it offered in its first edition in 2000 at the   Anthology theatre 40 Cuban productions reflecting   Cuban film making.  From April 3 – 11 2014 the Havana Film Festival of New York celebrated under the steward ship of its co-founder Carole Rosenberg its 15th anniversary.  With a broad program of 45 Latin American Films, including 24 from Cuba it offered feature length films, documentaries and shorts.  Having outgrown the Anthology there are now nine New York City venues where the HFFNY presents its program.  The focus on Cuba remains but the screening of significant productions from other Latin American countries has become an essential part of the program.  Given  the expansion of the film program, the addition  of sidebars, the increase of venues,  the growing audience,  the  involvement  of  27 cultural and educational  US and New York based  Institutions with its program, the Havana Film Festival of New York   has become a success story.

Because  of the close working relation with  ICAIC, the Cuban Institute of  Art and Film Industry  since its founding HFFNY  has benefitted from privileged access to quality Cuban and Latin American productions.  For other festivals   continued access to noteworthy recent film productions is frequently problematic. What also help the HFFNY are the changing climate in US – Cuban relations and the growing interest in Latin America.  After all the festival and related exchange programs had a clear mission from the very beginnings “the development of cultural bridges between the United States and Cuba within a Latin American context”  according to  Ines Aslant the executive director of the AFLFC   and overcoming prevailing misconception about Latin America.

Among the noteworthy features of the HFFNY 2014 edition  were four screening sessions and seminars open to the public at no charge  covering New Cuban Cinema: 55 Years of a Shared Dream,  New Horizons on Contemporary Cuban Cinema  and  International Film Markets  and  Theatrical Distribution in the United State.,  the tribute to  Cuban filmmaker Daniel Diaz Torres who passed away in 2013, the inclusion of  three productions by  Latino filmmakers based in the United States, and the incorporation of restored films. A brief review of some selections reflects the thematic range and depth of the 2014 HFFNY edition.

SE VENDE, For Sale   Jorge Perugonia, Cuba: In this dark comedy laughter and ingenuity are used as a metaphor for overcoming difficult times. Having learned survival skills from her dead mother our protagonist, the close to impoverished Nacar, decides with support from her boyfriend to dig up the bodies of her parents in the cemetery.  After boiling whatever remained from the corpses they sell the bones to people involved with rituals requiring bones.  Their endeavor is a smashing success, but her father is completely mummified and his bones cannot be retrieved. His body is stiff, and with an uncanny resemblance to Lenin, is placed upright and appears to be watching over them.

WAKOLDA – EL DOCTOR  ALEMAN  The  German Doctor, Lucia Penza, Argentine:  This dramatic narrative  provides  an account of Josef   Mengele’s  stay 1960  in Argentine’s  Bariloche an isolated settlement in Patagonia.  He   joins an Argentinian family running a lodge and collaborates with a neighboring small German colony driven by Nazi conceptions. The family does not know the identity of their impeccably dressed and gentleman like guest.  Unbeknown to them Mengele continues his concentration camp experiments on their daughter and the wife pregnant with twins.  Shot against a stunning scenery Lucia Prinza offers a subdued yet most convincing and unsettling portrait of the war criminal who succeeded to escape, though already tracked by the Israeli secret service.

ANGELES Y POLVO, Angels and Dusts, Hector Herrera, Panama/Spain:  Based on a true story, an alleged drug trafficking man and his wife are arrested in Panama and await trial. His brother comes to rescue their child while the jailed parents embrace religion and music to improve prison life.  Herrera selects a close to documentary approach in his portrayal of the brother, warring gangs, the drug scene, the gay subculture, and incessant murder and violence. The director has an uncanny ability to penetrate and film the criminal and legal scene made possible by his prior long term experience in Panama with the drug culture and a corrupt judicial system.  Given his focus on personal relations and realistic representation of the context his film is rather convincing.

LA GORGONA, Historias Fugadas – Gorgona Stories on the Run, Camilo Notero, Columbia: This is a skill fully produced outstanding documentary reconstructing conditions of a remote former prison island in the Columbian Pacific. La Gorgona was one of the best productions in the HFFNY program. The prison was built in 1960 as a facility for 900 inmates using German concentration camps as a model and closed in 1985 to become a nature preserve.  Using black and white archival material, animated footage, a narration based on extensive audio  interviews with former prison  officials and inmates and close up scenes of the setting  Notero applies a most unique and persuasive concept for the documentary. The history of the complex and the interview material is presented through voice over or l subtitles while the imagery shown reflects extraordinary footage of the flora and fauna of island. While we hear or read reports of the daily life of the prisoners we see close up footage of insects, small animals, plants and the decaying prison structures, leaving a significant impact. This juxtaposition of nature shots and texts tampers the prison violence conveyed but reinforces the story presented.

CONDUCTA Behavior, Ernesto Daranas, Cuba: A box office success in Cuba and Spain, this touching story depicts the bonding between a sixth grade teacher and a troubled young boy overcoming the obstacles of a rigid educational system.  Given the convincing presentation of their relationship and educational issues and its broad appeal CONDUCTA received the HIFFNY award as the best feature.

JAULA DE ORO The Golden Dream, Diego Quemada-Diez, Mexico/Spain: Travelling frequently alone a growing number of children and teenagers try to enter the United States in search of a better future. They come mostly from Guatemala, Honduras and El Salvador.  About half of those currently detained in the U.S. for illegal entry are minors.  Their journey on cargo trains confronts them with extortion, robbery, beatings, murder, abductions, sexual assaults, as well as forced prostitution and drug smuggling frequently imposed by cartels operating in Mexico.  The Golden Dream accurately reflects these conditions as they are experienced by three teenagers from Guatemala. Only one survives the journey and rounds up working in a slaughter house in the United States. Quemada-Diez offers a realistic unsentimental but moving presentation in this superbly filmed feature with outstanding acting performances and documentary overtones.

Given its profile and program the Havana Film Festival of New York is well positioned to continue its broad appeal and success.