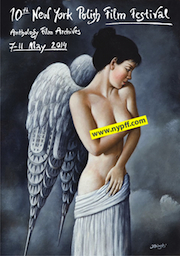 Established in 2005 to promote Polish films in the United States and attract an American audience, the Polish Film Festival (PFF) celebrated its 10th anniversary from May 7-11 at New York’s renowned Anthology Film Archives theatre, a traditional home to many niche film festivals. Working closely with the Polish Film Institute and other agencies, the film festival offered a well-rounded program with eleven recently produced features and a documentary, all subtitled.   Many of the films selected were award winning productions and had been shown before at international festivals, co-produced in several cases with Polish television.

Like other niche film festivals, the Polish Film Fest has a problem attracting a larger audience and appeared to have only a small number of participants who were not members of the Polish community.  The festival, directed by Hanna Hartowicz with the help of five volunteers, does not have a full time staff and only limited support through Zywiec, a Polish beer corporation, the local consulate general, and some donations.   Outreach efforts are therefore constrained and appear to be restricted to personal contacts and social media.   Nevertheless, for a relatively small understaffed festival with limited audience recognition and funding the high quality of some of the presented productions was certainly surprising. The PFF does not have the problem of getting outstanding productions, which many small film festivals tend to have.  Still, placing these films into larger circulation beyond other US Polish themed festivals poses a great challenge. By and large, the US audience avoids subtitled films and placement on digital platforms and other venues requires research for which the PFF does not have the resources.  No wonder that the target audience consists of the New York based Polish community where about 240,000 residents are of Polish origin.

Most of the films presented were produced in 2013 and offered a good sampling of themes and approaches in recant Polish filmmaking.  Among the most appealing were Slawomir Fabicki’s LOVING, depicting an upscale married couple of an architect and a civil servant who expect their first child. She is raped by the city’s mayor, delivers the child, but does not reveal to her husband what happened. He suspects that something is amiss and when he finds out can no longer relate to her. Their marriage comes close to breaking up. Fabicki provides a great, subdued, and uncompromising depiction of the changing relationship reinforced by the superb acting of husband and wife. LIFE FEELS GOOD by Maciej Pieprzyca and Bdo Kox’s THE GIRL FROM THE WARDROBE are noteworthy award winning features due to their sensitive representation of disabilities which actors play out in breathtaking performances. In LIFE FEELS GOOD Mateusz is misdiagnosed as a child with having impaired mental abilities. He is a moron or vegetable as medical professionals put it, though he suffers in reality from cerebral palsy. Over 26 years he finally learns to communicate with the outside world but decides to stay in the home for the mentally challenged where he lives. Throughout the film we learn his perspective from the intelligent voice over Mateusz provides. An equally original concept shapes the basis for Kox’s film.  This is the tragic comical story of Jacek, who lives with and takes care of his autistic brother Tomek, and the coping strategy both employ to survive.  Tomek is able to relate to Magda, a depressed neighbor with suicidal tendencies and both share their isolation from the outside world. Magda’s hallucinations induce surreal over tones. Wojciech Mecwaldowski, a comedian by background, who plays Tomek, delivers a spell binding performance in his plausible depiction of a mental disorder. THE GIRL FROM THE WARDROBE is one of the best Polish films I have seen.  IN HIDING, by Jan Kidawa Blorski, is set in a Nazi occupied Polish town and dissects the relation between Janina, a cellist and daughter of a shop keeper, and Ester, a young Jewish dancer who was given shelter by Janina’s father to escape the Germans. After the father gets deported both women develop a close and intimate relationship with Ester hiding most of the time in the cellar.  When a neighbor discovers that she lives there they kill him and dispose of his body. Russian forces liberate the town, yet Janina has become so obsessed with Ester that she pretends the Nazis are still there and even kills Ester’s old boyfriend who searches for Ester. Ester becomes a virtual prisoner until she leaves the house when Janina decides to confess. Blorski has produced a thriller with strong psychological overtones that certainly offers a most unique interpersonal narrative in the context of the Nazi prosecution of Jews.   Adrzej Wajda directed WALESA, MAN OF HOPE and succeeds through re-enactments, archival footage, and an impressive performance by Robert Wiekiewicz, in the role of Lech Walesa, to reconstruct Walesa’s role in altering Polish history through the Solidarity movement. Wajda produced a persuasive biopic with many great insights in that formative period of Poland.

I trust that the 11th edition of the festival will retains the quality of this year’s edition. A larger audience would certainly benefit.