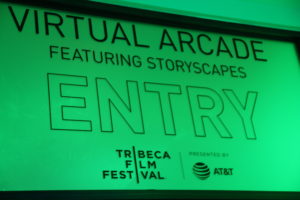 Back in 2016, I wrote about the plethora of film-funding opportunities offered by the Tribeca Film Institute (TFI). Now, in 2018, I finally had an opportunity to head up to New York City during the actual Tribeca Film Festival (TFF) – its 17th iteration, running April 18-29 – from which the TFI was spun off in 2004. I hadn’t attended since its inception (when I still lived in Manhattan), and it was fascinating to see how the TFF, like so many other festivals these days, has expanded to include television (or “episodics,” as they are so often called) and virtual reality (VR). It’s this latter category I review, below. Stay tuned for a second article, coming soon, on movies and TV.

Starting on Friday, April 20, and running through Saturday, April 28, festival pass- and ticket-holders had and will have an opportunity to view 26 VR, augmented reality (AR) and interactive installations, showcasing the enormous variety of work being done in these areas today. I was lucky to see 5 of them, all of which I found interesting in different ways. There still exist, in my opinion, two not-insignificant barriers to entry before VR and its cousins can truly catch on and be accessible to all audiences.

The first such obstacle is the equipment (i.e., the viewing and listening devices): no matter how innovative the design of the project, one still has to don an Oculus Rift or some such device to take full advantage of the immersive VR experience. The second is the individualized nature of the screening, which leads to long lines and wait times, though the sign-up system I saw at Tribeca, allowing attendees to type in their cell phone number and then walk away until a ready-alert would call them back, was a major step in the right direction. Give it a few years, and I expect we’ll see changes in the use interface that will make access even easier.

What follows, below, in alphabetical order by title, are brief capsule reviews of the installations I saw during the press preview.

Narrated by actress Rosario Dawson (Claire Temple on Netflix’s Luke Cage and their other Marvel Defenders series), BattleScar tells a fictional story that throws us into the Punk scene of late-1970s New York City, where we meet Debbie and Lupe, two runaways struggling to find their way. All beautifully animated (with no visible live-action elements), the piece is noteworthy for its playful manipulation of scale, shrinking and expanding the size of the characters, and our camera angles vis-à-vis their placement on-screen, so that we feel alternately Brobdingnagian and Lilliputian. Adding to this cinematic design, directors Allais and Casavecchia cut to gray between scenes, and avoid a complete 360º use of space. Though not interactive in any way, the experience is fully immersive, with an evocative soundscape rounding out the mise-en-scène.

A vastly different kind of VR film, The Day the World Changed is a work of documentary activism that ends with a call to action to end the ongoing threat of nuclear war. Directors Arora and Unseld combine animation and archival footage in a sometimes interactive mix that is both eerie and informative. Using the haptic hand controllers, one can reach out and manipulate artifacts from the 1945 bombing of Hiroshima, all the while listening to Manhattan Project supervisor Robert Oppenheimer intone about how he (reluctantly) has become the “destroyer of worlds.” Adding to the sinister vibe is the ghostly presence of other viewers (four can watch at one time) plugged into the film, whose peripheral shapes alert others to their motion and placement, preventing mid-movie collisions. A bit otherworldly? Yes, and that is all to the benefit of the piece, adding to our engagement in a dialogue still as vital as ever.

A work of docudrama (“docu,” that is, provided one believes in the truth of the source material), Dinner Party is the only VR film I watched where I was completely untethered from cables; the headset (a Samsung Gear) and headphones, though wired to each other, are otherwise unattached to a central console. Furthermore, with six fully rotatable chairs set around a mock dining-room table, each viewer of the film is free to spin around as much as possible (something I did throughout, as director Soto uses the complete 360º of the space, shooting with, as he told me, a Technocrane). We start above a conventional early 1960s house, surrounded by a spectral shimmer, then settle into the living room/dining room combo as a sweet married couple attend to their four guests. Suddenly, a broken dish and the sounds from an LP on the record player lead to a disturbing flashback where our hosts, Betty and Barney Hill, recall what they claim was an alien abduction. Truth, fanciful imaginings or the manifestation of outright psychosis, Dinner Party is pure virtual cinema, immersing us completely in the terror of the unknown.

*In the interest of full disclosure, I know one of the writers, Laura Wexler.

I saw the second (of three) parts of this cosmos-based VR series at SXSW (which I reviewed in my recap of that festival), and now had the great pleasure to not only watch Part 3, but bump into series director Eliza McNitt. Whereas Part 2 plunged us into the center of a black hole, Part 3 brings us closer to home, exploring the sounds of our solar system’s stars and planets and the unique position our Earth holds as a vessel for sentient lifeforms. Narrated by rock legend Patti Smith (when I asked McNitt why she chose Smith, she answered, “Because she is the voice of the universe”), SPHERES: Pale Blue Dot offers the viewer a journey that is universal in all senses of the word: galactic, geographic and metaphysical. The haptic controls allow one to reach out and touch the stars, which then unleashes their imagined song. Talk about your unearthly beauty …

Vestige (Directors = Aaron Bradbury/Paul Mowbray, 12min.) – WORLD PREMIERE (created in collaboration with NSC Creative, AtlasV, Kaleidoscope, RYOT and supported by the ​Centre National du Cinéma France; Vestige was acquired ahead of Tribeca by Other Set, which was founded by Dogwoof’s CEO Andy Whittaker)

Whereas 90% (according to directors Soto and McNitt, above) of VR films are made on the Unity platform, directors Bradbury and Mowbray here used a Canon 5D combined with the now-defunct Microsoft Kinect, along with Depthkit technology, to create wraith-like images of a woman, Lisa Elin, and her now-dead husband, Erik, as she recalls their life together. Acted and lip-synced to recorded telephone conversations with said Lisa, Vestige offers the viewer a glimpse and grief and memory that is simultaneously moving and spooky: though we be right in the space with the characters, the line-drawing quality of their forms, both real and artificial, makes us truly feel as if in the presence of ghosts. Director Bradbury explained to me that, though there be no haptic hand controllers, the experience is nevertheless profoundly interactive, set to read – and respond to – the gaze of the individual spectator, taking the story in different directions based on where one looks. I looked around a little too much, in fact, completely stepping out of the exhibit (I wondered why the cables felt taut), though gentle (spectral?) hands pushed me back where I belonged; a testament to how involved I was in the overall story. I loved this, though it was definitely more than a little creepy. 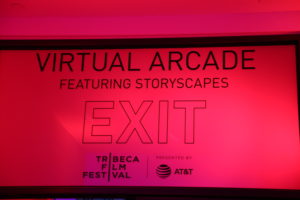