Under the new leadership of Executive Director Jennifer Maizel, Artistic Director Tom Hall and Programmers Holly Herrick and Andrea van Beuren, the 2009 Festival looks to be among the best ever. In its 11 years, NIFF has grown dramatically into one of America’s leading regional film festivals. The Festival has a reputation for stellar programming and has cemented its status as one of the most exciting and exclusive festivals of its kind. Annually attracting over 10,000 filmmakers, celebrities, journalists, and film enthusiasts of all kinds together in a less frenzied, less commercial, and more intimate environment, the Festival has distinguished itself as one where art ranks before commerce.

From the Opening Night Film on Wednesday, June 3 to the Closing Night presentation on Sunday, June 7, the Newport International Film Festival is going to be the place to be for all film lovers.

The Festival will open with In The Loop (UK/USA) from director Armando Iannucci and starring Anna Chlumski, James Gandolfini, Mimi Kennedy, David Rasche and Zach Woods. Kennedy, Rasche and Woods will be on hand for the Opening Night screening and party. 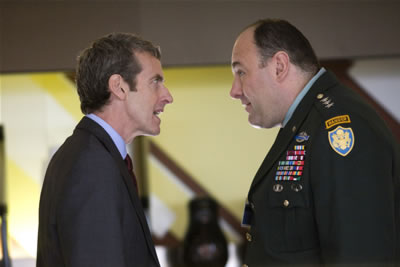 On Sunday, June 7, the Newport International Film Festival will wind up its 2009 edition with a film that should certainly speak to the Newport community. Pierre Marcel’s new documentary Tabarly (France) is a tender, moving portrait of Éric Tabarly, one of the greatest, most innovative yachtsmen in the history of sailing, whose humility and soft-spoken nature belied his passion for competition and the rigors of a life at sea. Pierre Marcel will be in Newport for the screening.

On Saturday evening, June 6 at the Jane Pickens Theater, the 2009 Newport International Film Festival will present The Claiborne Pell Award to one of our great masters of cinema. The late Senator Pell was a champion of the arts, responsible for the legislation that created the National Endowment for the Arts and the National Endowment for the Humanities. This award, established by the Pell family in partnership with NIFF over 10 years ago, will feature a multimedia retrospective of our Honoree’s career as well as an on-stage conversation with the Honoree, to discuss their work and upcoming projects. The festival has partnered with the Museum Of Modern Art (MoMA) to expand the mission of the Pell Award, starting this year, the festival will partner to donate $10,000 on the Honoree’s behalf to the MoMA Film Archive to support the museum’s To Save and Project Series. The honoree, in consultation with NIFF and MoMA will take part in chosing which film the grant will benefit.

Members of our Narrative and Documentary Competiton Juries include:

All Short Film Descriptions can be found at www.newportfilmfestival.com and in the Festival catalogue.

Expect the unexpected and be prepared to try something new as you meet the unusual, rule-breaking characters in these eight original stories. There is something for everyone in this diverse selection of narrative short films hailing from every genre.

These seven short animated films from around the world reflect the limitless styles and creative possibilities at the fingertips of ambitious contemporary animators. From a utopic city in the sky to an unusual bowl of spaghetti, these original and imaginative films are sure to surprise and inspire you.

The mission of the Newport International Film Festival is to enrich the community by presenting unique programs that inspire, challenge, and engage a broad and diverse audience through the art of filmmaking.

For tickets and additional information on the 2009 Newport International Film Festival, please call 401-846-9100 or visit: www.newportfilmfestival.com