In German and Jewish themed film festivals the focus on the Third Reich and the Holocaust remains essential as expressed in the large number of features and documentaries screened on those topics. The New York Jewish Film Festival excelled earlier this year with documentaries like EINSATZGRUPPEN: THE DEATH BRIGADES (Michal Prazan) and FORGOTTEN TRANSPORTS: TO POLAND (Lukas Pribyl) or features like GRUBNER’S JOURNEY (Radu Gabrea) and PROTECTOR (Marek Najbrt). These films may differ in their creative content and production value but show a fundamental respect for past history and its suffering.

The 2010 Berlin International Film Festival, the berlinale, included several productions about the German past among which A FILM UNFINISHED an Israeli-German co-production by Yael Hersonski and the 2009 German feature JEW SUSS: RISE AND FALL (the German titles actually translates JEW SUSS: A FILM WITHOUT A CONSCIENCE) by Oskar Roehler were most prominent and provided object lessons on how the past and perceptions of the past are dealt with. 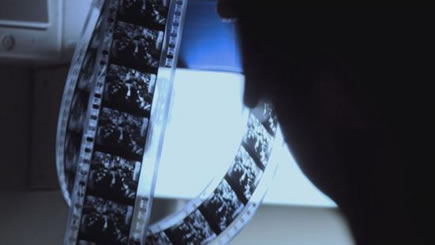 In A FILM UNFINISHED Hersonski uses about one hour of unedited 1942 footage from a Nazi propaganda film on life in the Warsaw ghetto to reconstruct the Nazi version, contrasting the Nazi film with commentaries of several ghetto survivors viewing her film, the re-enactment of Adam Czerniakow, head of the Ghetto Judenrat whose diary confirms the events portrayed in the Nazi footage, and a staged commentary by the German cameraman who filmed the material. Some of the footage reminds of material shot by German camera men in the Lodz ghetto for Goebbels propaganda film THE ETERNAL JEW by Fritz Hippler. In Hersonski’s film the imagery of death and dying from the Warsaw ghetto which held half a million Jews before they were shipped to the camps to be killed, are heart breaking even for those who have seen much similar material before.

Roehler’s film JEW SUSS – RISE AND FALL a feature about the 1940 JUD SUESS film production by Veit Harlan proved to be the most controversial film screened at the 2010 berlinale. This Austrian-German co-production is one of the most expensive recent German feature films with a budget of about 30 million Euros. It includes a first class crew of seasoned actors like Moritz Bleibtreu as Joseph Goebbels; Tobias Moretti as Ferdinand Marian, the leading actor of Harlan’s JUD SUESS; Martina Gedeck as Anna Marian; Heribert Sasse as Deutscher and Armin Rhode as Heinrich George who played the duke in the original Nazi film, to name but a few. They all received kudos for their performance since the figures they portrayed were so convincing and the re-enactment of scenes from the original JUD SUESS so persuasive. This expensive film had further assets such as superb sets with an extraordinary attention to detail. Last but not least the film was directed by Oskar Roehler, a noted German award winning director (NO PLACE TO GO, AGNES AND HIS BROTHERS, THE ELEMENTARY PARTICLES). It would have been difficult to omit such a prestige film from the berlinale, why it was entered for the main competition remains a puzzle.

The original 1940 JUD SUESS film depicts the history of the Jewish banker Joseph Suess Oppenheimer who served as the financial adviser to the Duke of Württemberg in the 18th century. After the duke died Suess was arrested, charged with fraud, tortured and condemned to death and, refusing to convert to Christianity, executed in 1738. Under the close guidance of Joseph Goebbels Veit Harlan transformed the story into an anti-Semitic agitation and propaganda film with the clear message that all Jews should be driven away and annihilated. JUD SUESS was the most successful film in the German 1939/1940 season viewed by 20 million people and shown to international praise at the 1940 Venice Film Festival, applauded by young Michelangelo Antonioni. JUD SUESS became mandatory viewing for the SS, concentration camp guards, for populations of areas from which Jews were deported, and other groups, and according to some witnesses, proved effective in inciting violence against Jews.

Roehler’s version of the making of JUD SUESS and the fate of its leading actor was booed during the press screening and received the worst evaluation of all films competing this year for the Golden Bear, the award for the best feature. In ten years reporting on the berlinale I do not recall any other films with such a negative assessment. Yet there are reports that in public screenings the German audience applauded at the end of the film. In presenting the story of Ferdinand Marian from his discovery by Goebbels , rise as a Nazi and international film star to his death, Roehler re-writes the actual events and shows little sensitivity for that dreadful part of German history. Goebbels becomes a manic studio head running the German film industry giving lavish champagne parties Ferdinand Marian is portrayed as a victim of his circumstances; he becomes “Der Gute Oesterreicher”, The Good Austrian, as a German daily headlined its critique of Roehler’s film. Roehler does not show him as a career opportunist and willing Nazi collaborator.

The real Marian worked closely with Goebbels through the end of the Third Reich after starring in JUD SUESS. He acted in three more propaganda films and in eight other non-political films produced during that period turning into one of the most popular German male leads. As other German artists on Hitler’s official list of artists deserving special treatment like Herbert von Karajan, Wilhelm Furtwaengler, Gustaf Gruendgens, Richard Strauss and Johannes Heester, Ferdinand Marian led a comfortable life, close to the Nazi elite while the world was crumbling and millions perished. He survived the war, was in the process of being ‘denazified‘and already offered again a job in 1946 when he died in a car accident.

In Roehler’s perspective, modifying, or re-writing the truth, is justified by ‘following film industry practices’. In his film Marian becomes a victim and an alcoholic who is dropped by Goebbels after completion of the film. His life continues on provincial stages or military encampments where he presents JUD SUESS. Marian seems to meander between debaucheries, liquor and sex. His wife disappears on Goebbels orders and is shipped to the camps since she is half Jewish. He cannot locate his child, thus becomes more and more conflicted, prone to depressions and anxieties. After learning after the war that his wife was killed in a concentration camp he commits suicide by crashing his speeding car into a tree. All of these elements which are essential for Roehler’s story have been invented (as well as minor ones such as Goebbel’s appearance at the Venice film festival). Roehler violates a taboo which for obvious reasons is still respected in Germany; do not to use the holocaust for entertainment or commercial gain.

In my talks with individuals involved in Roehler’s production, I learned that the script was written in order to make the production more marketable and that it would have been difficult making a commercially viable film sticking to the truth. There were some cynical quips such as a prominent actor’s statement that “this [Roehler’s] film Jew Suss has been funded by Goebbels” or the quip that Roehler’s film is Goebbels revenge. Unfortunately not all German reviews of the film focus on the discrepancy between the films story and what actually happened. Unsuspecting readers and the audience stay in Roehler’s imaginary universe and leave the film with sympathy for Ferdinand Marian. Even if JEW SUSS becomes a commercial success the film remains an embarrassment.