New Orleans, August 27, 2010 – New Orleans Film Society is pleased to announce that the opening and closing feature films have been selected to screen at the 21 st Annual New Orleans Film Festival taking place October 14-21, 2010. This year, Welcome to the Rileys will be the opening film with Blue Valentine rounding out the festival.

Welcome to the Rileys is directed by Jake Scott, son of director Ridley Scott, and made its debut at the 2010 Sundance Film Festival. Welcome to the Rileys follows a damaged man (James Gandolfini) and his wife (Melissa Leo) who have been driven apart by grief after losing their daughter but are brought back together when they meet a troubled young woman (Kristen Stewart) on a business trip to New Orleans. 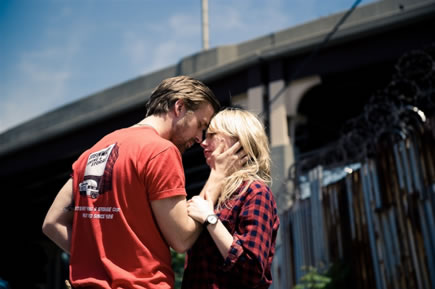 Blue Valentine, which will be closing out the film festival, is directed by Derek Cianfrance and premiered at the 2010 Sundance Film Festival and screened in the Un Certain Regard section at the 2010 Cannes Film Festival. Blue Valentine is a story of love found and love lost told in past and present moments in time. Flooded with romantic memories of their courtship, Dean (Ryan Gosling) and Cindy (Michelle Williams) use one night to try and save their failing marriage.

The 2010 New Orleans Film Festival will take place October 14-21, screening at various venues city wide. The Renaissance Arts Hotel New Orleans will serve as the official hotel and headquarters for the festival and play host to panels and a VIP lounge. Festival attendees are also able to take part in a generous $79/night room discount.

All-Access and Six-Film passes will be available soon at www.neworleansfilmsociety.org.