Next month, the Film Society of Lincoln Center presents its annual “Rendezvous with French Cinema.” French cinema produces enough interesting films yearly to justify an annual series, something that seems less likely to be true of, say, Spanish or even Italian cinema, both of which are also showcased in a yearly series at the Walter Reade. 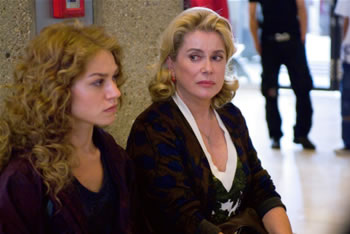 The annual series devoted to French cinema stirred considerable interest several years ago when it was presented in collaboration with the flagship French journal, Cahiers du Cinèma. This relationship, having ended, changed the programming which took on a more aggressively commercial cast–an outcome which would be unobjectionable if the commercial French cinema of today were aesthetically comparable, say, to the Hollywood cinema of the 1950s, which, unfortunately, has not been the case.

In previous years, there have been sometimes no more than three films by directors of international stature in a slate of at least a dozen films. Yet, needless to say, this series is probably the most consistently popular of the year at the Walter Reade. Past Rendez-Vous with French Cinema premieres have included Olivier Dahan’s Oscar-winning “La Vie en Rose,” Guillaume Canet’s “Tell No One,” Laurent Cantet’s “Heading South,” Christophe Honoré’s “Love Songs,” Cédric Klapisch’s “Paris,” Claude Lelouch’s “Roman de Gare,” Claude Miller’s “A Secret,” and Danielle Thompson’s “Avenue Montaigne.”

This year, however, that appeal should be well-deserved. To my amazement, the series boasts, by my count, new films by seven significant directors, including one world-class master, Claude Chabrol (who is having a North American premiere for “Bellamy” on March 12th).

Also within the series are new works by the following filmmakers:

Claire Denis, who, in recent years, has moved from strength to strength has a U.S. premiere (on March 13th) for “Five Shots of Rum” (“35 Rhums”).

Agnès Varda, “the godmother of the New Wave”, whose new film “The Beaches of Agnès” (“Les Plages d’Agnès” which is having its NY debut (on March 7th), is an autobiographical essay.

Costa-Gavras, whose work in more than one recent film has earned him a renewed interest by his shift to less ambitious material (or is it a less ambitious approach?) since his more political heyday in the ’70s and ’80s, will have a North American premiere (on March 9th) for “Eden Is West” (“Eden à l’ouest”).

André Téchiné, who, at the very least, has consistently maintained a high level of craftsmanship within his prolific output, will see the world premiere of his social drama (on March 10th) “The Girl on the Train” (“La Fille du RER”).

Jean-François Richet, who would be notable for his cinematically brilliant remake of “Assault on Precinct 13” alone, will have the U.S. premiere (on March 10th and 11th) of his ambitious two-part film, “Mesrine” Part 1 (“Mesrine, L’instinct de mort”) and Part 2 (“Mesrine, L’ennemi public n° 1”).

Benoît Jacquot, who has not ceased to produce challenging works in his, by now, long career is having a North American premiere for “Villa Amalia” (on March 13th).

Also of potential interest may be two films: “Versailles,” a NY debut by first-time director Pierre Schoeller, the screenwriter of the excellent, “A Dreamlife of Angels” (March 6th); and “The Apprentice” (L’apprenti”), which received the Louis Delluc prize, is having a North American premiere (March 11th)—a film on the boundary of fiction and documentary by Samuel Collardey.

Considering that other New York venues with inferior projection capacities have presented extraordinary retrospectives of such major artists as Mikio Naruse, Manoël de Oliveira, Raoul Walsh, Luis Buñuel, Roberto Rossellini, and others, cinephiles have reason to disparage the current programming philosophy of the Film Society which appears to be more interested in pursuing fashionable trends than continuing to be the custodians of the great legacy of film art—something it has been throughout its history.