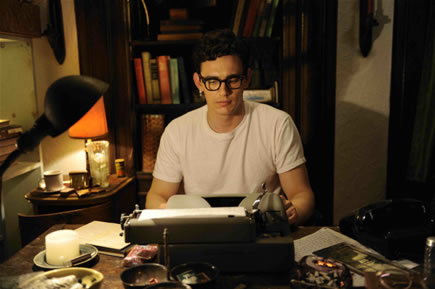 One of the anticipated titles having its International Premiere at the Berlinale today is HOWL, one of the hits of last month’s Sundance Film Festival. More than 50 years after its initial publication, the tone poem HOWL is still a shocking bit of humanism, a cry for tolerance and a yell for individual self-expression. The poem’s author, the beat poet Allen Ginsberg, remained a controversial figure his entire life. The impact of this envelope-pushing literary classic and the bohemian philosopher who was its inspiration should certainly resonate with the Berlinale crowd, who are known for their serious cinema cred.

HOWL, directed by the documentary team of  Rob Epstein and Jeffrey Friedman (whose THE TIMES OF HARVEY MILK won an Oscar for Best Documentary in 1984 and was the inspiration for last year’s Sean Penn-starrer MILK), is the first dramatic film from the duo. Originally, they had envisioned HOWL as a documentary, but the importance of the subject and the charisma of the lead character begged for dramatic interpretation.

In a standout performance that could be 2010’s first Oscar-worthy one, James Franco gives a compelling performance as the young Allen Ginsberg, alienated from his Jewish roots, hungering for homosexual encounters and literary recognition. The author’s outsider lifestyle set amongst the bohemian communities of New York and San Francisco is alive with vibrant atmosphere and eclectic energy.

The film is no traditional biopic. It’s taken almost entirely from interviews, court transcripts of the obscenity trial that followed the poem’s publication and readings of the poem itself, part of which is represented through animation. There are many scenes with Franco facing the camera as an interviewer questions him about his motivations, his influences and his unlikely role as a literary pioneer. His world view, shaped by his alienated childhood, his homosexual longing and his Buddhist philosophy, gives the literary provocateur a winning charisma that explains Ginsberg’s continued influence and appeal.

With the beat poets and their literary legacy as popular here in Germany as in the United States, the film should strike a positive chord with the public and the industry here, despite some less than generous reviews coming out of Sundance. The film’s triple-layered structure (courtroom trial, animation and biopic drama) can be quite distracting and constantly impedes the narrative flow. However, for its championing of the outsider, this is prime Berlin material.