Awards by the specialized juries at the berlinale sometimes are a better indication of the quality of the productions selected than the official awards, though in the 2010 berlinale edition, few disputed the selections of the jury run by Werner Herzog and concurred with the choice of awards for BAL, THE GHOSTWRITER, CATERPILLAR, HOW I ENDED THIS SUMMER, and IF I WANT TO WHISTLE, I WHISTLE. These films obtaining the golden or silver bear awards, let in Herzog’s word the viewer discern dark corners of our soul. They did not provide complete interpretations nor engage in linear story telling. Several irritated rather than gratified and stayed clear of the obvious and taken for granted world. Yet the specialized juries picked also some truly outstanding films. 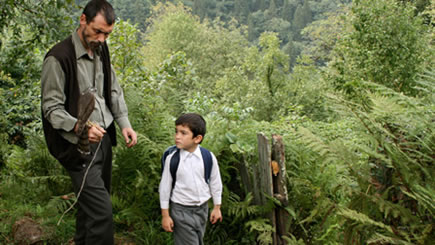 KAWASAKI’S ROSE by Jan Hrebejk was singled out by the ecumenical and C.I.C.A.E. juries as best film. The film deals with the same issues as THE LIVES OF OTHERS, but demonstrates a greater complexity and acumen in analyzing in a superbly staged and enacted script the reasons and motivation for betrayal and collaborating with oppressive secret services. A dissident Czech psychiatrist about to be honored for his contribution to human rights struggles is slowly revealed to have collaborated forty years earlier with the communist secrete service. A television crew working on a documentary about this prominent psychiatrist comes across long hidden files revealing his betrayal. This film is far superior in structure and execution to THE LIVES OF OTHERS, since it probes defective memories showing how biographies are reconstructed according to the needs of the moment. Equally important, Hrebejk presents personal development as a non-linear process, and incorporates a level of intellectual discourse which is frequently missing in similar films. The box office for ROSE will be much smaller than for the Donnersmarck film, yet the questions posed about contradictory motives, sincerity and integrity linger on. One of the noteworthy passages of the film comes in the detached and analytic review Kafka the former chief interrogator provides of the methods of interrogation used to turn people around. It was not the use of physical torture but the interrogator’s focus on our vulnerabilities, contradictions, and emotions which proved effective..

WINTER’S BONE directed by Debra Granik received in Berlin several awards and was as clear audience favorite. Winner of the 2010 Sundance Grand Jury Prize and the Waldo Salt screenwriting award WINTER’S BONE is a neo-realistic thriller staged in the isolated and scarcely populated areas of the Southwestern Missouri Ozark mountains and excels in its seemingly perfect ethnographic portrait of the Ozark culture, its backwoods people, and the criminal meth underground which has corroded the region for many years. The story is perfectly timed and played and focuses on the struggle of a teenage woman to keep her family together and raise her siblings against all odds, her addicted father having jumped bail thus endangering their family house,the pervasive violence, the iron code of silence among her outlaw kins, the corrupt police, to name but a few.

On a lighter side, berlinale receptions provided relief from sober films. Among the more interesting count the SHOOTING STARS sessions, an annual presentation at the berlinale of the most promising young European actors. A series of events introduces them to the industry, profiles the actors for the press, links them to sponsors, thus in essence providing professional networking platforms. In 2010 SHOOTING STARS enjoyed its 13th edition and featured ten actors. Connecting the Shooting Stars to the industry is part of the systematic sophisticated and certainly well funded effort by the MEDIA Programme of the European Union to propagate and foster European cinema. Additional support for this and other related European Union ventures is provided by national and state agencies as well as private interests. The scope and deep pockets of this effort are unparalleled and will be discussed in a future article. But joining these shooting stars in their well orchestrated appearances was a most pleasant experience.